The Sheriff Is Secular? 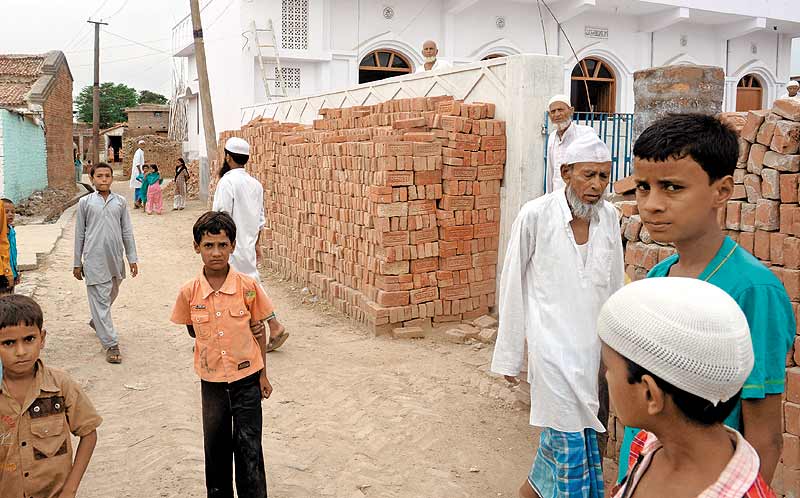 Laloo Prasad Yadav stoked his old fief with a huge rally at Patna’s Gandhi Maidan: he was showcasing his sons Tejaswi and Tej Pratap. Rival and chief minister Nitish Kumar promptly quipped that “T-2” had been launched. But behind all that humour, the CM’s problems are mounting. Particularly with the Muslim community, which Laloo will be wooing agg­ressively. Nitish is taking on Narendra Modi within the NDA essential to keep the Muslims with him, but that may not work, say commentators and members of the community. Across Bihar, in min­ority hamlets and towns, they have not forgotten the Forbesganj firing: police virtually occupied a village for six days and shot dead four residents to facilitate the setting up of a factory. The incident is two years old, but the wound was reopened again when arr­est warrants were issued against 50 Forbesganj residents last month. 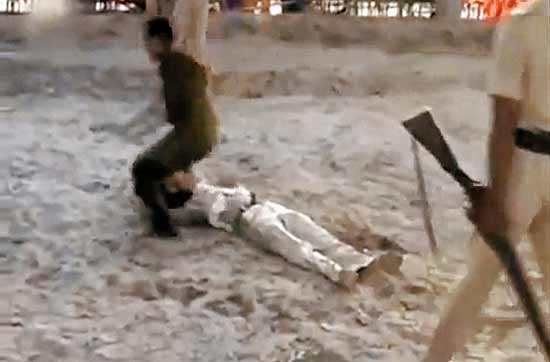 A video grab of the Forbesganj firing

First flashback to June 3, 2011. Farooq Ansari is still in shock from the incident—as if it’s fresh and not a memory. That day his 28-year-old wife Shazmeen, seven months pregnant, was shot dead by Bihar police in Forbesganj, Araria district. Three others and an infant were also killed. “She received two bullets in her temple, two in the chest and abdomen, one each in the right and left thighs. They ruined my life, my family,” says Farooq, who was working in the upcoming factory where the firing took place. Shazmeen was returning home after seeing a doctor. That afternoon, villagers were protesting against a private company that was building a wall that would block the only road leading to Bhajanpur, their hamlet.

“My husband did not even know the charges on which he was being held. This is justice denied for him, and others.”
Nikhat Parveen, Wife of a terror suspect

This village of nearly 2,000 Pasmanda (backward) Muslims remains traumatised by the events. “After firing at him, they jumped on the face of my son and abused him,” says Pathkan Ansari. His son Mustafa, 18, had passed his last exam with a first division. “He was good in studies and the only hope for the family,” says his ailing father. The Forbesganj incident took place six months after Nitish began his second term; in all the rosy euphoria, the media largely ignored the event.

Around that time, in this northeastern district bordering Nepal, two Muslim women were raped by Sashastra Seema Bal (SSB) personnel. When the victims complained, SSB men responded by opening fire. Two villagers lost their life. Another incident ignored nationally, but with a resonance in Bihar.

Now the ghost of Forbesganj has been resurrected by 50 arrest warrants. “Some of them died on that day of firing, some are deceased otherwise. Many men from the village are underground or on the run. How can the dead be named in a warrant?” asks Mahendra Yadav, who is supporting the villagers’ legal battle. Mohammad Iliyas Ansari, one of those named in a warrant, tells Outlook, “Where should I go at this age of 61? The FIRs mention 5,000 unknown people. This is far more than the entire population of our village.” 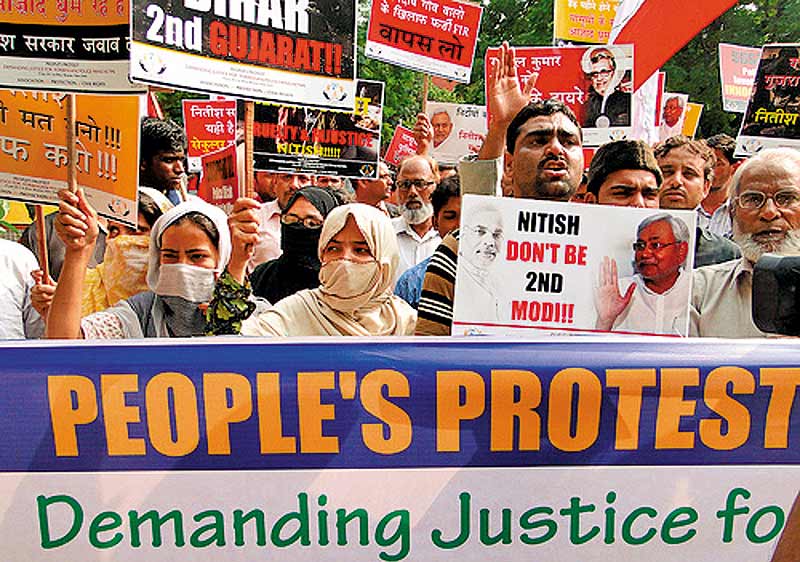 The old man says the private company and police are working together and the latter threaten to book villagers under anti-terror laws if they do not withdraw the police complaints they have filed against the company. “We received Rs 1 lakh each from Laloo and Sonia Gandhi but Nitish babu neither visited us nor announced any compensation for the victims. This is the real face of Nitish’s secularism,” says Maulvi Rasool Ansari of Bhajanpur, who lost his 8-year-old son in the firing.

The Araria incidents are not the only dent in the secular image of Nitish. A year back, the arrest on terror charges of five Muslim youths from Barh Samaila village in Darbhanga (one of them, Qateel, died in police custody) has added to the alienation of Muslims. Nikhat Parveen, wife of Fasih Mahmood, now in Tihar jail, says, “Fasih didn’t even know about the charges under which he has been arrested. Forget the trial, not even the charges have been scrutinised in his case. This is justice delayed for him and for others as well.”

Police action against the community has alienated Muslims. Policy, too, sees them get the short shrift.

Moreover, there are reports in the local Urdu press about Muslims being similarly targeted and threatened in the Darbhanga, Gaya, Sitamarhi and Madhubani districts. Recently, two youths from Samastipur were picked up as terror suspects, but released after villagers staged strong protests. The charge turned out to be baseless. In Katihar district, this April, a Muslim woman was raped and cut to pieces. Relatives say when they went to report the incident, the cops were found drinking with the accused. Instead, police picked up 36 villagers from the victim’s community—including 16 women! A few days later, a 50-year-old Muslim woman was raped in the same village. A “lesson” was being delivered.

“Though the mainstream media is being  managed in the state, if you analyse the Urdu press you will find that conflict and polarisation at the ground level is rapid now and there’s the danger of an imminent communal clash,” says Arshad Ajmal, a political analyst.

“Nitish is an opportunist who wants to grab more sympathy and votes from the Muslim community on the grounds of opposing Modi. How can he claim to be secular when he supported L.K. Advani? Doesn’t he know of Advani’s role in the Babri demolition?” says Dr Shakeel, a public health activist. Those building a case against Nitish also point out that of the state’s 29 cabinet ministers, 11 are from the BJP. Seven BJP ministers are from the RSS cadres, and some of them participated in the Ram mandir movement. Giriraj Singh, a cabinet minister, is a vocal Hindutva hardliner and even campaigned for Modi in the Gujarat elections. As for the Muslim representation in Nitish’s cabinet, it’s just two ministers. Yet, for Nitish ‘Secular’ Kumar, everyone except NaMo is secular enough to be pals with.

A State Of Stasis