Unlike Anju, Anjali has at some point beaten all her rivals above her in the ranking and that makes her a better prospect for a medal than the Kerala long jumper. 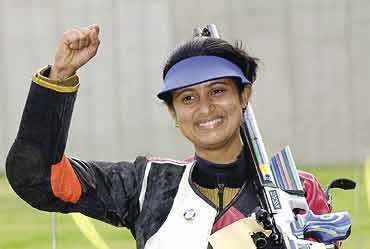 Like Anju Bobby George, Anjali Bhagwat is also currently ranked fifth in the world. But unlike Anju, she has at some point beaten all her rivals above her in the ranking and that makes Anjali a better prospect for a medal than the Kerala long jumper. And if the Reliance employee keeps her tryst with destiny on 14th August, it will arrive in the next day’s news as an appropriate I-Day gift for one billion Indians. It will also be a starter for the two other ladies, Anju and K. Malleswari, who may complete the medal menu in the next few days.

It was only a fluke that brought Anjali to the shooting ranges after dabbling in her first loves, judo and karate. It was during her NCC days at college that she came in as a stand-by for a colleague on the shooting ranges. And the rest, as they is, history. At 34, she is India’s bet for a medal in 10-metre air rifle.

Anjali’s greatest moment came in Milan last year. In the Italian city she recorded the biggest victory of her career in the World Cup Final. She shot 49 perfect shots out of 50 to win the title, pushing some of the greatest names behind in her event. The list of her victims included the-shooter-of-the-world Lioubav Galkina of Russia, double world record holder Li Du of China, world champion Katerina Kurkova of the Czech Republic, Sydney Olympic silver medallist Cho Hyun Kang of South Korea and World Cup Finals champion Sonja Pfeilschifter of Germany.

She was also the Champion of Champions in a combined competition for men and women at the end of the World Cup Finals in Munich in 2002. She beat 10 of the best men and women rifle shooters to be crowned the best rifle shooter, a rare achievement for an Indian in any sport. It is with these memories that Anjali will take the rifle at the Athens ranges. The eighth spot at Sydney will also be on her mind. It was her maiden Olympic appearance for which she had got a wildcard entry only 15 days before the Games. The Mumbai shooter is much more mature and confident now. The likely windy conditions in Athens, however, are a cause for concern for the petite shooter in her second event, the 50-metre 3-position.

Galkina is likely to be Anjali’s main rival. The 30-year-old Russian is number one in the world rankings right now. She secured victory at the World Cup final in the three-position match, came third in the European championships, won the air rifle match at the World Cup in Munich and completed the year with the title of European champion. In addition to that, she has also collected three silver medals at the World Cups. But then rivals like her are what brings out the best in men in women at the Olympics.