For the Indians in the US, it's striking a chord—Obama is 'one of us' 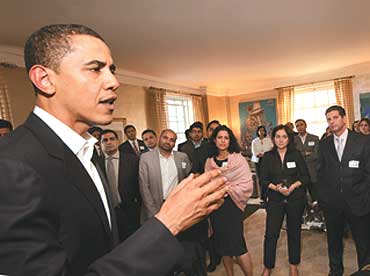 Among those who joined Obama in the early days is Preeta Bansal, a former solicitor general of the state of New York. She is now the senior policy advisor to the young Illinois senator. About her decision to support Obama, Preeta says, "I think he is an extraordinary, extraordinary figure who on so many levels represents change". This change has often been defined as "generational change". For Preeta, this signifies "a change in what political leadership is all about, a change in America's outlook toward the world and a change, in a sense, of the possibility of breaking down barriers".

Obama's most enthusiastic supporters are drawn from second-generation American immigrants. Their parents in the Democratic Party were mostly avid supporters of the Clintons, having forged friendships with them over several years. But once Hillary declared her support for Obama, some of her top advisors and fundraisers followed her example, switching over to the Obama camp instead of licking their wounds. Notable among them is Neera Tanden, who's widely acknowledged as the architect of Hillary's healthcare plan and for whom she hosted a baby shower at the White House. Neera has now joined the Obama team as director of domestic policy.