Perhaps India's greatest allrounder, Vinoo Mankad was also the architect of some of its finest victories. 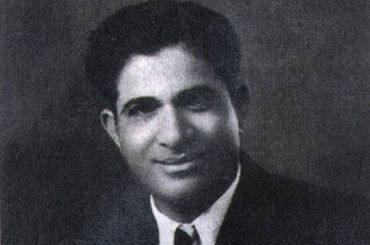 What Vinoo Mankad has meant to Indian cricket's advancement is not known to many - and one can not blame them. The game's popularity skyrocketed after India so unexpectedly won the World Cup on that historic day at Lord's in 1983. True, the exploits of cricketers of the past were written about. Rarely, though, has the documentation explained what the outstanding performances of these players meant to the development of cricket in the country. I would like to explain why Vinoo bhai, as I used to know him really should be India's Cricketer of the Century.

When a cricketer, and an allrounder at that, plays first-class cricket from 1935-36 till 1964-65 a span of 29 years we are at once talking about someone extraordinary. A right-hand opening batsman and a left-arm spin bowler, he was also a wonderful fieldsman and catcher, to his own bowling in particular.

How many know that Mankad virtually scripted the first five Indian Test victories? In India's historic first-ever Test win against England at Chepauk in Chennai he captured 12 wickets, and the margin of victory against Nigel Howard's team was an innings and eight runs. India's next two wins were against Pakistan in 1952-53. Mankad took 13 wickets as India got home by an innings and 70 runs in New Delhi. India lost the second Test at Lucknow (Mankad did not play because of an injury) and the teams came to Mumbai with the rubber level. Once again, Mankad got into the act. He made scores of 41 and 35 not out as an opener and bowled 90 overs to take 8 for 124 as India won by 10 is local bank wickets.

If the Tests against Pakistan showed his mastery with the ball, it was with the bat that he dominated Henry Cave's New Zealanders in 1955-56. As an opening batsman in the second Test in Mumbai, he scored 223 out of India's 421 for 8 declared and took four wickets to ensure that India won by an innings and 109 runs. In the final Test in Chennai, he and Pankaj Roy shared a first-wicket partnership of 413, which remains a record till today. Mankad made 231 while Roy scared 173. As if that wasn't enough, Mankad took four wickets in the second New Zealand innings and India won once again.

No Indian has dominated an overseas Test in the manner Mankad did at Lord's in 1952. At the very venue where he had made his debut eight seasons before,   Mankad, who was released from the Lancashire league so he could play for his country, came up with an epic allround display. Against an attack comprising the tear away Fred Trueman, Alec Bedser (the greatest fast medium bowler ever according to Bradman) and Jim Laker, Mankad opened and scored 72 in the first innings.

Then, as England piled on the runs, it was Mankad who held their batsmen on a leash, bowling a marathon 73 overs to take 5 for 196. Defeat stared India in the face. But Mankad relished the challenge. He made an audacious 184 as India averted an innings defeat. And then, in order to show the English batsmen that even getting the few runs could be difficult, he bowled 24 overs for 35 runs as the home team lost two wickets in knocking off the 79 runs required. To a man, Lord's stood up and applauded.

Then there were his feats in Australiain 1947-48 against Bradman's "Invincibles". Mankad became the first Indian batsman to score a century against Australia. Then he made a second. Both were at the Melbourne Cricket Ground, both made while opening the batting. And all through the rubber, he bowled probingly and tantalisingly. He remembered how Ray Lindwall had advised him to shorten - his back-lift "Vinoo, you can't bring it down from Sydney Harbour Bridge. Of course I'll go through!" Mankad got the message and the centuries followed.

Mankad was, without doubt, the most respected international cricketer from India. The closest to him as an allrounder would be Kapil Dev, who was for a while the highest wicket-taker in Test history. Similarly, Mankad was for a short time the record- holder for the fastest Test double of 1000 runs and 100 wickets he achieved the feat in only 23 Tests. Australia's Keith Miller, widely regarded as the best allrounder of that time, needed 33 Tests.

Above everything, Mankad played a hand in Test victories in a manner no Indian before or after him has. For that alone, he is my Cricketer of the Century.