The Shame Is Squarely On Them

Taslima’s solipsistic atomism jars, but one must admire her spirit in the face of slimy intolerance 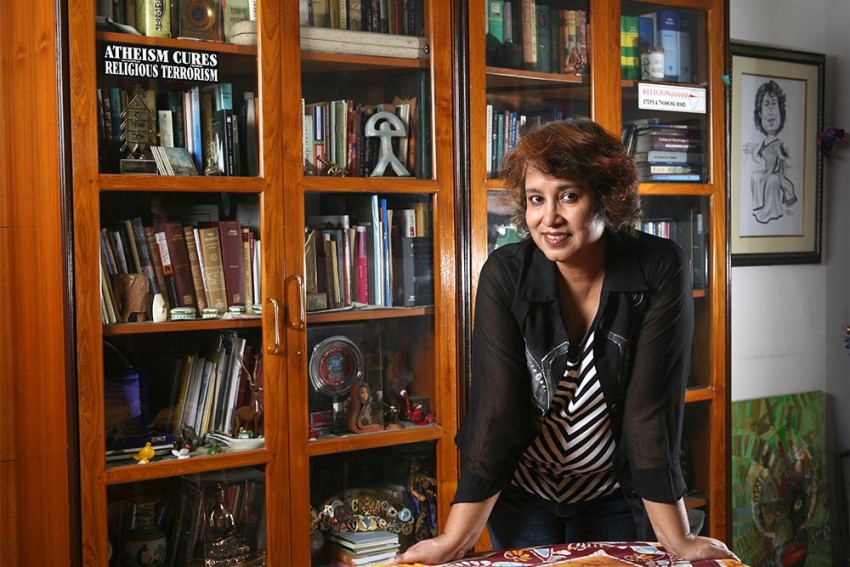 Photograph by Narendra Bisht
Sayandeb Chowdhury December 01, 2016 00:00 IST The Shame Is Squarely On Them 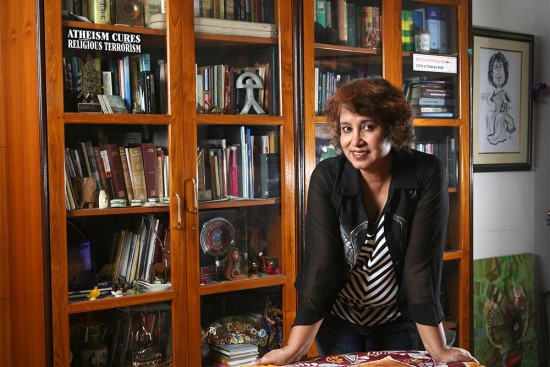 An autobiography called Exile is bound to invoke a dreary sense of deja vu, if for nothing else, but for the sheer weight of the word; and the impossibility of improving upon its literary and political foundations. And honestly, since when has exile not haunted a writer or his work? Look attentively to just the twentieth century and you’ll see a Jean Genet or James Joyce or a Milan Kundera, in self or forced exile, not to talk about an entire literature produced in secrecy by Soviet dissenters in Russia and East Europe.

Taslima’s fortunes, in boom and bust, however, have been disproportionate to her talent. When she had burst into the Bengali literary scene with her powerful, no-holds-barred, feminist collection of columns in the early ‘90s, she caused both considerable disquiet and delight. Before long, she had ama­ssed a cinestar-like popularity, which sat uneasy on her rather mediocre literary output. In 2007, when she was hounded out of Calcutta for causing no apparent outrage, it was again inconsi­stent with her influence as an agent-­provocateur. In the intervening years, she was exiled from Bangladesh, found asylum in Europe and the US and settled in Calcutta, where she had found a degree of quiet, sang-froid success. But peace was short-lived and since then, Taslima has lived mostly in Delhi and her controversial stake in Bengali letters has all but waned. This book is largely about her life as a renegade wri­­ter, especially during and after those November days in 2007—the state of living in isolation, the difficulty of surviving on clemency and questionable state patronage rather than on public acceptance and support and her impossible wait for return to something that resembles Calcutta—the impossible that always haunts the exiled the most.

Taslima’s writing never manages to rise above solipsistic atomism and hence carries little literary value. Taslima’s prose has always been blunt and without beauty and the translation does not make any effort to hide the banality of the writing. But perhaps that’s not what would bring readers to the book. This book, though it’s about herself and herself only—her courage, her frankness, her brio and unbridled spirit—is really about the slimy intellectual, the cowardly political elite, the pandering state, the forgetful media and the wayward, easily-­instigated public.

Taslima’s writing has little literary value, but it says a lot about vacuous bhadrolok credentials, literary cartels, the difficulty of powerful men to accommodate her free, godless soul.

One does not need to believe everything Taslima says, but one is not blind either to the hypocrisy of intellectual claims, the perversions of patriarchy or what a brand of myopic Wahabists want to turn their world into. If nothing else, this is enough reason to show her our deepest empathy.

The world has moved on from 2007. But in the dreaded direction that this book only manages to hint at. The world is unmistakably trapezing towards the precariousness of an alt-right circus, India is under siege from shadowy men in khaki shorts and Bengal’s vaunted Leftist politics is now in tatters, with the meteoric rise of rightist belligerence in social thought and practice.

Taslima’s fate mirrors this global shift; her exile resonates with the fear and loathing of an intolerant, divisive and navel-gazing middle-class, of their chest-thumping anti-intellectualism, false­hood and nationalistic hubris. She ends the book thus: “The entire expanse of human history is a fleeting instant, a footnote in the history of time. Not a soul in the universe will ever flip through its pages. Is it not enough that even amidst the infinite insignificance, I am still swimming against the surge?”

Indeed, and that is why one would wish that Taslima Nasrin does not go quietly into the night, that she rages, rages against the dying of light.

A Man Of Science, But With No Art Of Storytelling