The Shadow of Burqas

For Afghan women, freedom's costlier than the $68 mn spent on the constitution 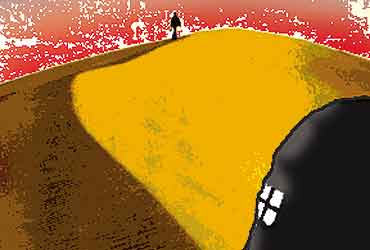 outlookindia.com
-0001-11-30T00:00:00+0553
Progress lies in the eyes of the beholder. When Prof Maliha Zulfacar returned to teach for a year in Kabul University after a 20-year exile in the US, she was in a state of shock. She remembered Kabul as a stately capital. Now it was mostly rubble. Despair overwhelmed her when she visited a village school. The ramshackle school was mostly in ruins. Bombs had blown off roofs. Bullets pockmarked the crumbling walls. School girls sat on the dirt-stained floor. The school teacher did not even have chalk and blackboard.

Yet she taught. And the children listened. Maliha's heart broke. The clock had been turned back drastically in her homeland. Life was far more backward, poverty-stricken and battle-scarred now than it was when she was a child. She offered her condolences to the teacher. She could offer no words of hope. But at least she could commiserate, comfort, express support.

But Maliha was in for her second shock. The teacher told her that she was thrilled with life—clearly Maliha had no idea how much progress had been achieved in the last two years. She pointed out she could teach again and girls could attend school. That is progress, because both were prohibited during the Taliban regime. Far from complaining about the inadequacies, difficulties and lack of resources, the teacher was, in fact, thanking her stars.

No one denies that so much more needs to be done in Afghanistan. But people in conflict zones see life and reality through an entirely different prism. And this is precisely why international aid often fails to help. Aid workers come coloured by their perspectives and perception of reality engendered by their world of peace, stability, progress and economic development. They assume what they want is what the women of Afghanistan, Iraq, Kurdistan or Kosovo want. For a western woman, to be unable to drive a car means a life of dependency, immobility and claustrophobia. So they campaign for women's right to drive a car. They succeed in Kabul. And laud themselves on the symbolic value of this expression of women's freedom. But how many Afghan families own a car in Kabul, let alone in the countryside? It benefits a few, but alienates not only the poor who have a different set of urgent needs, but also the powerful mullahs and patriarchs who see this as nothing but the propagation of elite western values. So they start blocking, rejecting, opposing everything that is western.

The 'values' that need to be propagated to benefit Afghan women—indeed to benefit all poor women of the world—are education, justice and healthcare. All that the global community should do is to gently create an enabling environment for women to fight their own battles. We have to help them help themselves. So far, $68 million has been spent on formulating the Afghan constitution. But if societies don't change, the constitution will remain on paper. Who'll enforce it? How will women reach a level where they can insist on rights guaranteed by this new constitution? It would have been far better if money was spent on long-term projects like education, healthcare, the justice system.

With better education and health, women will slowly change their world from within. Change will come, but slowly. It has taken decades for women's empowerment to strike roots in the western world. Many countries are still battling for quotas for women in parliament, corporate boardrooms and educational institutions to ensure gender parity. So then why are we so impatient when it comes to expecting change and progress in poorer or repressed countries?

Change can be accelerated, but this too must come from within. No Afghan will be impressed or inspired by a westernised Afghan woman who speaks English with an American accent, works openly or walks around without a burqa.But a local woman, respected and known, can take the lead. For instance, in Kurdistan, it was Hapsa Khan, the popular wife of a local leader, who took the first big, brave step for women's emancipation in the 1920s. She walked to the main public square along with a group of women, then they took off their veils. Men and mullahs were shocked. But she was respected, learned and courageous. Her husband supported her and together they changed the world for Kurd women. It is not that Afghanistan lacks such women. It's just that some of them prefer to conform and take the line of least resistance. Afghan President Hamid Karzai's wife is a gynaecologist. Yet she chooses not to work, citing security concerns. No one is asking her to dispense with her bodyguards. Even hospital security can be strengthened if necessary. Afghan women desperately need medical services and she would relay an important message to Afghan men and women if she worked.

One of the priorities of international aid workers and indeed even the UN is to set up a ministry for women's affairs in conflict zones. As Maliha points out, it doesn't help. It just becomes a dumping ground for unimportant issues. The ministry invariably lacks teeth. A woman is put in charge, but both the minister and the ministry are purely symbolic. It achieves nothing in terms of women's empowerment. Woman activist Igballe Rogova from Kosovo points out that during the rebuilding of her country, local women rejected a ministry for women's affairs: because women's rights have to be part of every ministry. The women's ministry thus did not materialise but women were empowered by their integration into every rebuilding programme. Iraqi women are now doing the same. Change, progress, rebuilding of a society can take place not by separating women from the mainstream, but by including them in every facet.