Rebel outfits in the Northeast have a long history with 'foreign connections'. The Assam blasts just brought it back in focus. 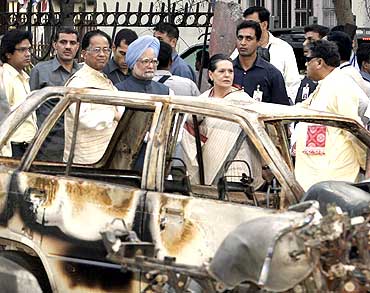 A week into the car bomb attacks that killed 80 and injured over 300 in Assam, the security apparatus has drawn a broad conclusion: the strikes were carried out by the outlawed "United Liberation Front of Asom (ULFA) in collaboration with the Bangladesh-based Harkat-ul-Jihad-al-Islami (HuJI)". If what the sleuths say is true, it means forces outside the country are actively engaged in a plan to bleed the region. Union MoS for home Sriprakash Jaiswal was categorical: "It was an attack by local militants in collaboration with outside forces."

So what of the claim made by the little-known Islamic Security Force through a text message to a Guwahati news channel? A top IB official claims "the isf's claim and ULFA's denial are red herrings meant to deflect attention. We hope to crack the case soon...."

Whether this happens or not, a proven fact is that insurgent groups in the Northeast have had international links from the mid-1950s. It began with the chief of the rebel Naga National Council (NNC), Angami Zapu Phizo, leaving the Naga hills in 1956 to fight for an independent Naga homeland from foreign shores. Phizo, described as the father of insurgency in the Northeast, travelled through the then East Pakistan to eventually arrive in London in 1960. He continued to pursue his dream from the British capital until his death in April '90. Phizo's daughter Adinno who succeeded him as NNC president, has continued to push the homeland campaign, though feebly.

In all this, the Indian state's part in fomenting the many rebellions cannot be understated. From the neglect of development needs to widespread corruption, to illegal migration and to excesses by the defence forces, the region had all the makings of a tinderbox waiting to be lit by the '70s. The vestiges of those turbulent times are still with us, if in more sophisticated forms. And it works on both sides, the uproar over the Manorama rape case in which army personnel were involved to the latest serial bombings, they all bear the mark.

The geography of Northeast India—a vast swathe of 2,63,000 square kilometres (Sikkim included) bounded by China in the north, Myanmar in the east, Bangladesh in the south-west and Bhutan in the north-west—also played a key role in the region's 30 or more active insurgent groups criss-crossing the frontiers and establishing strategic alliances with amenable forces across the border.

The Northeast shares a 4,500 km-long international border with its four South Asian neighbours, but is connected to the Indian mainland by only a tenuous 22 km-long land corridor passing through Siliguri in West Bengal, described as the 'Chicken's Neck.'

The original Naga rebellion would have ended some three decades ago had everyone in the NNC abided by the Shillong Accord of November 11, 1975, whereby the rebels had agreed to accept the Indian Constitution and lay down arms. But geography again came in handy for those who wanted to keep the insurrection going. A large group of NNC leaders and cadres moved to the heavily-wooded and virtually unadministered parts of Burma in '80 and formed the National Socialist Council of Nagaland (NSCN).

In Assam, the region's largest state with a population of 26 million, a new insurgent group was formed on April 7, 1979, with the aim of achieving a 'sovereign, socialist Assam'. The ULFA had no difficulty in recruiting disaffected Assamese youth, but they were untrained and had to be indoctrinated. So it turned to the Kachin Independence Army (KIA), an anti-Yangon ethnic militia. Columnist Sunil Nath, former publicity chief of the ULFA, notes that "chairman Arabinda Rajkhowa himself led the first batch of ULFA cadres to the KIA bases in Myanmar for training in 1987. I was the mission secretary of the second batch in 1988 of 80 boys for training at the hands of KIA instructors."

These were among the ULFA's first attempts to strengthen strategic links with rebel armies in India's South Asian neighbourhood. The outfit soon started striking terror across Assam. Select individuals and businesses were targeted, mainly to extort money for its 'war chest'. A dozen tea planters were killed as they terrorised the industry to pay up. 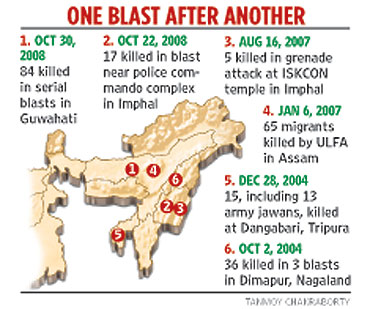 Facing heat at home, the ULFA opened shop in Bangladesh in 1985, setting up safehouses in Damai village in Moulvi Bazar district. Intelligence sources say the task of strengthening links there "was entrusted to ULFA leader Munin Nobis (who has since surrendered)...the idea was to use Bangla elements to establish links with allies in Pakistan." The Pakistani contacts assisted the crossover of a number of ULFA activists, including the military chief Paresh Baruah, to Afghanistan.

While the ULFA's top leadership chose Bangladesh as their base, the group's band of fighters was stationed in Bhutan. As the military offensive intensified, 3,000 ULFA militants moved over into southern Bhutan. But Thimphu had had enough. After it failed to persuade the rebels to leave peacefully, Bhutan launched a crackdown in December '03 and expelled the rebels. Dago Tshering, Bhutan's ambassador to India, says, "Maybe we were not good diplomats, we failed to make the ULFA rebels leave peacefully."

But Bangladesh remains a concern, with worries of even the forces there being a partner to the terror. New Delhi has for a decade harped about the 200-odd rebel camps there but to no avail. In recent weeks, though, Dhaka is said to have agreed to look into pinpoint details given by India. Ajai Sahni of the Institute for Conflict Management isn't optimistic: "The ULFA is compelled to seek help or act in collaboration with groups like the HuJI to stay afloat and run its businesses in Bangladesh. Dhaka has not acted tough on groups like the HuJI."

The October 30 attack has brought the spotlight back on ULFA, the only group capable of carrying out such well-coordinated attacks. Could an outside force have got it to execute the terror plans? In the absence of independent verification, one has to factor in the claims of the security agencies as well as the ULFA denial of any involvement.

Again, what of the intelligence reports that a 36-member ULFA squad accompanied by "Islamic elements" had entered Assam from Bangladesh in two motorboats on October 18? The police are said to be "puzzled at the identity of the Islamic elements". As far as the rest of India is concerned, the same can be said of the serial blast perpetrators.