The Sene Patis Lose Their Marbles

In coastal Karnataka, the original ‘Hindutva laboratory’, the people finally get sick of Sangh parivar excesses 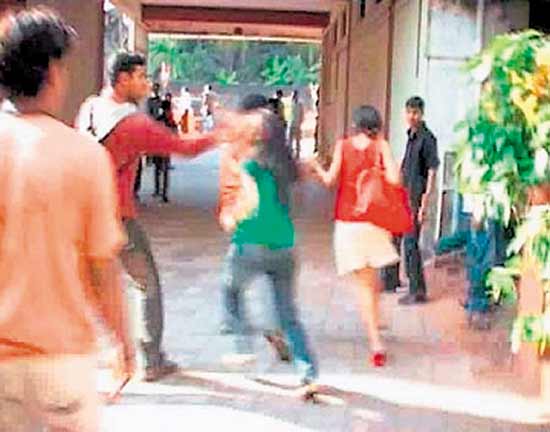 It wouldn’t be too far-fetched to say that one image sealed the BJP’s prospects in coastal Karnataka: three girls cowering in sheer fright in front of a bellowing mob. In July last year, when a handful of youngsters were celebrating a friend’s birthday at a homestay party in Mangalore, a mob of over 50 goons belonging to the Hindu Jagar­ana Vedike—an affiliate of the Rashtriya Swa­yamsevak Sangh—attacked them, supposedly to protect ‘Bharatiya samskriti’ from getting corrupted. The girls were nearly stri­pped, beaten black and blue and physically molested. The partying boys fared no better. As if that was not humiliation enough, all of them were hauled off to the police station while the goons who attacked them celebrated their success in front of the policemen.

The backlash was swift and severe. Though right-wing group leaders accused the youth of indulging in “sex work” and tried to protect their marauding brigade, youngsters in the coastal region saw through these ‘immoral policing’ tactics. Students from innumerable colleges and schools in the region held protest after protest. The writing was on the wall.

Much before the homestay incident, harassment had become a daily routine. Around two years ago, things came to such a sorry pass that a 15-year-old XIth standard girl student was harassed near Mulki and dragged to the nearest police station—for the crime of having a Muslim boy as a friend. While the Hindu goons raised a ruckus outside the police station, the station officer had the girl’s father come to the station and comp­lained about her “behaviour”. She was so humiliated by the entire incident the next morning she hanged herself to death. The gangs now had blood on their hands.

Yet, the ruling BJP in the state tacitly supported the Hindutva goons. When the Sri Rama Sene—another right-wing Hindutva outfit—attacked young women in a Mangalore pub, the power centres were more interested in discussing the ‘morality of consuming alcohol’, a topic brought to the fore by hardline Hindutva leaders. C. Manjula, then head of the Karnataka State Commission for Women, was part of a conference, along with Sangh parivar ‘intellectuals’, to discuss the links between alcohol, rave parties, free love and other such ‘crimes’ linked to the homestays!

A XIth standard girl, dragged to the police station for having a Muslim boy as a friend, was so traumatised she killed herself.

Now, even as all this moral policing was on, the dubious activities of some of the coastal MLAs had the public shaking their heads in disgust. Udupi MLA Raghupathy Bhat, whose wife died under mysterious circumstances in faraway Delhi, was the guiding force behind a state-sponsored rave party on St Mary’s isl­and where alcohol, drugs and sex were app­a­rently in plentiful supply. Recently, the same Mr Bhat’s sexcapades with an unknown woman in a hotel room and a resultant CD with graphic visuals were grist for the TV channels for a few days. Though he loudly protested his innocence, the BJP wisely denied him a ticket. Another party MLA, Krishna Pal­e­mar, was one of three caught checking porn clips when the assembly was in session.

But there were other serious socio-political developments which sealed the fate of the BJP in the region. Over the last couple of years, various churches in the region became the targets of a series of attacks. Fathers and nuns were beaten up, a number of false cases were filed against Christians for ‘coerced conversions’. The fate of the minority Muslims was no different. In 2005, members of the Hindu Yuva Sena—another parivar outfit—had stripped and beaten up two Muslim men, the father-son duo Hajabba and Hasanabba, alleging that they had tried to transfer cattle to the slaughterhouse.

Even as this case—which was captured on camera and widely reported in the state’s media—was dragging on in court, the audacity of the Hindutva mobs kept on increasing. In the name of protecting the ‘holy cow’, Muslims were attacked and robbed of money and other valuables in innumerable incidents. In one such attack, a Muslim youth jumped into a river from the vehicle he was travelling in to escape the mob. Unfortunately, he landed on the dry river bed and lost his life. As usual, the local police called it a suicide, hushed up the incident to protect the Hindu goons.

The Hajabba and Hasanabba inquiry dragged on for a few years. The police conveniently ‘lost’ evidence, eye-witnesses turned hostile, the victims came out and said they feared for the lives.... End result? The court dismissed the case for lack of clin­c­hing proof. That day, even as Haj­a­bba and Hasanabba wept tears, the Sangh parivar burst crackers on the streets of Udupi and celebrated the ‘innocence’ of its Hindu rowdies.

It’s no surprise then that a vast majority—and not just the Chris­tians and the Muslims but also the youth and even ordinary men and women—have turned against the BJP. Surprisingly, this includes many in the region who had long supported the Hindutva agenda and voted religiously for BJP candidates. Clearly, the people had deci­ded enough was enough. This may come as a surprise to many but many years prior to the BJP finding its present form, much before its reign in Delhi, the infamous rath yatra, the Babri Masjid demolition, or anything else, it was in Udupi that the party’s earlier avatar—the Bharatiya Jan Sangh—had tasted its first ever electoral victory. Way back in 1967, it had captured power in the Udupi Town Municipal Corporation elections and till recently had successfully held on to it.

In the 1983 assembly elections, when the Congress was first routed in the state, the BJP had won 18 seats from the coastal region. Though it lost some of these seats in the 1985 elections, it subsequently kept increasing both its voteshare and the number of seats. Which was what culminated in the BJP capturing the Vidhana Soudha in 2008.

People like Kaladka Prabhakar Bhat—who ran his ‘coastal republic’ here much like the Reddys did in Bellary—and others of the RSS had assiduously developed the region into a Hindutva laboratory over the last five decades. But it took just a couple of years of being in power for the cracks to develop within. Sex and sleaze, corruption and comm­unalism, goons and gangs, attacks and haras­s­ment, they all combined to seal the BJP’s fate.

For the first time in five decades, in the elections held to the urban local bodies last March, the BJP lost the Udupi tmc to the Congress. It was a sure sign that Kaladka Bhat’s empire was finally crumbling.

Indeed, the intensity with which the people in the 17 constituencies of coastal Karnataka have turned against the BJP has even shocked its political rival, the Congress party! Out of eight assembly seats in Dakshina Kannada district, BJP won only in Sullia, that too with a margin of a mere 1,373 votes. In the remaining seven, the Congress won with comfortable margins. For instance, in Mangalore constituency, sitting Congress MLA U.T. Khader was expected to face a stiff battle. But to the surprise of all, this time around he won comfortably with a margin of 29,000 votes. From Mangalore (South) constituency Yogish Bhat of the BJP had won three consecutive elections. This time he lost by a margin of 12,200 votes. From Mangalore (North) Krishna Palemar of the BJP lost by a margin on 5,397 votes.

Of the five constituencies in Udupi district, the BJP has won only one seat. From Udupi town, Pramod Madhwaraj of the Congress beat his BJP rival by a margin of over 40,000 votes. That’s the highest margin in the constituency in the last 40 years!

In Uttara Kannada district too, it was the same story. Vishweshwara Hege Kageri is the sole BJP winner from here. He barely scraped through from Sirsi with a margin of 3,059 votes. There was no better proof that the  ugly face of Hindutva had not only consolidated the minority votes against the BJP, even among its earlier Hindu supporters, it had evoked utter disgust. After years, the once harmonious coastal region of Karnataka heaved a sigh of collective relief.

By Gauri Lankesh in Bangalore

(Gauri Lankesh is the editor of the eponymous Kannada weekly, Lankesh Patrike)

How The Southern Portal Crashed