The Secret's In The Masala 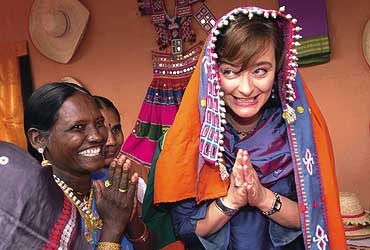 outlookindia.com
-0001-11-30T00:00:00+0553
Queen Elizabeth II could hardly have hoped to live in England and escape Indian food. Of the 9,000-odd Indian food restaurants in Britain, some sit on the way to Windsor Castle, others are a few minutes' drive from Buckingham Palace, whichever way Her Majesty goes. She hasn't dropped in yet, but the picture's clear from the castles.

Still, no one was expecting the Queen to write a foreword to an Indian recipe book. Not even one with recipes from a string of new chefs, those found in Favourite Recipes of the Raj. Learn now from Cherie Blair how to make Kutchhi bhindi. From former actress Glenda Jackson saag aloo. Pop star Tom Jones has a recipe for prawn curry. Kevin Keegan, former England football manager, has Britain's favourite Indian dish, chicken tikka masala, down pat. Novelist Irvine Welsh goes for saag paneer, comedienne Victoria Wood for vegetable curry. The list is endless.

For food buffs, the celebrity recipes offer a glimpse into how Westerners prefer cooking up their favourite Indian cuisine. Blair's Kutchhi bhindi, she says, is best made with tender young pods. Jackson serves up saag aloo using spinach and potatoes. Jones' favourite, rich prawn curry, is made in coconut milk.

The recipe writers' list was put together by the most determined Tommy England has ever known. Tommy Miah, 42, came to Britain when he was 10. He began his working life as a kitchen porter in a restaurant in Birmingham, he tells Outlook. And now, "Well, I have been working with celebrities for the last 15 years."

Miah has at least as much skill putting together British celebrities as in putting together an Indian meal. "First, there was Sunday Times editor Andrew Neil," Miah lists. "Then Lord Fraser, who was trade minister. Writer-broadcaster-politician Edwina Currie wrote the foreword for my second book." In 1996, he wrote a book called A True Taste of Asia with a foreword written by the Queen's former daughter-in-law, Fergie. Then came the mouthwatering praise from Princess Anne. The Queen of England's foreword now is a royal coup.

"It's very unusual for the Queen to do something like this," a spokeswoman for Buckingham Palace said. "It is not the Queen's custom to do something like this. She does not normally write forewords for books or endorse products but this is a very good cause." Proceeds from the book will go towards cancer research. In her foreword the Queen praises the cause, and also the "tempting array of recipes". Favourite Recipes of the Raj goes on sale in a few weeks at £#9.99 and Tommy hopes a sell-out will raise nearly £#200,000 for the charity.

Miah says he had asked her three years ago to write a foreword for the recipe book "but we got a letter back initially saying that Her Majesty was quite busy, so we thought nothing would come of it," he says. "Then out of the blue we got a letter from her saying she would indeed write the foreword."

Queen Elizabeth is apparently quite passionate about Indian food. The palace spokeswoman said "the Queen has travelled the world and during her trips she has tasted curry and other Indian delicacies and has thoroughly enjoyed it when it was offered to her". So it wasn't only the Indian food around in Britain. It could just as soon have happened with that visit to India that Robin Cook spoilt, but other cooks clearly did not.

Miah is building on the Raj name now to sell it to the British. There are about 300 Indian restaurants in Britain that are Raj something or the other. Miah is taking that further. His own restaurant in Edinburgh, Scotland's capital, is called The Raj. Last year, he opened another hotel there, called The Original Raj Hotel. Each of its 18 rooms has a name, not a number. There's the Bollywood, the Maharaja, the Maharani, with decor to match.Outside is a three-tonne marble elephant. And if that's not enough, he's just added a six-tonne Ganesha. "You should have seen people when the crane brought that to the hotel," Miah says. He now plans to build a chain of Original Raj hotels across Britain.

Miah also has an eye on the big picture. Last year, for a charity ball in support of Anti-Slavery International, he produced a recipe book called A Taste for Freedom. Another recipe book raised money for Scottish European Aid. Now, he says, "different charities approach me for different projects."

And it's not just recipes he serves up. "I went to 10 Downing Street on March 9 in 1993 with a big curry to celebrate John Major's birthday," says Miah. Major, just back after launching the Indo-British Partnership in India, held a happy celebration with his staff over the curry. A year later, he prepared curry for 8,000 people at the Earl's Court exhibition centre in London. His managers made sure that got into the Guinness Book of Records. Miah's International Chef of the Year competition, launched in 1991, drew 400 entries then. In its eleventh year, last year it drew more than 5,000. It's an event the British media now tracks from quarter-finals onwards. The finals are a news event few dare to miss. Miah is now consultant to British Airways and to the Bangladeshi airline Biman. He is also consultant to the first class railway catering services in Britain.

Expectedly, Miah talks now with the practised ease of a celebrity. What Her Majesty is to him, he is becoming to lesser chefs. From cooking for celebrities, he's now "joined them". "Of course, the Queen was quite a challenge." He has also engaged Stuart Higgins, one of London's hottest publicists. The same chap, Miah reminds you, that handles publicity for David Beckham, the star captain of the English football team.

Lesser known chefs, not surprisingly, dismiss Miah as a publicity stuntman, saying when it comes to serious eating, their food is better than his. But few can deny that even if it's himself Miah is aiming at, the publicity offensive has given Indian food a new and news profile, endorsed by the rich and famous. The Queen has never written about fish and chips; her foreword now is royal reminder that it's fish and chips the Brits are becoming strangers to. India has come back to colonise Britannia's insides.

"It is a sign of the success of Indian food in Britain," Miah says. "Indian food has just taken over everything. It's good for the whole Indian subcontinent that the Queen recognises that." No two ways about that.