The Secret Diary Of Amar Singh

This Sanju baba has a great future. If not as a politician, then as a sting reporter. Look at the tehelka he created... 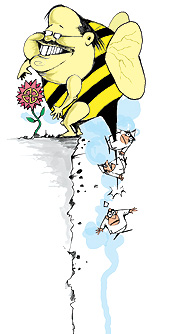 This Sanju baba has a great future. If not as a politician, then as a sting reporter. Look at the tehelka he created with that secret recording of his meeting with Union law minister H.R. Bharadwaj. Earlier, I’d tested his skills with a earstud-shaped cam picked up at a CIA recession sale in LA. And did Sanju deliver! He caught one Mumbai socialite telling another of how her husband beats stress by disguising himself as a kulfiwala. And to think that Sanju pulled it off while inaugurating a boutique selling skimpy clothes for men to save fabric.

Sanju’s success is inspiring. With friends in Bollywood, I could conduct several stings. And now there’s ex-swimming champ, Nafisa Ali, who can specialise in underwater filming. Actually, with so much talent one could start a company specialising in scoops and scandals. Sanju even has a name for it—Amar Sting Inc. News of my plans (leaked to the media by yours truly and attributed to PMO sources) has had TV channels queueing up. News Of The World wants to know if I could catch Gordon Brown watching Bollywood item numbers.

And, yes, I also have a movie project—an expose of the fashion industry with eight songs and eight chases on toy cars all shot on the ramp. Its working title: The Devil Wears Jaya Prada. Before I forget, with all this tapping/stinging Sanju and I have evolved a code language. If I call him and there’s a long silence, it means he should call back from a safe phone. If there are two stretches of silence interjected by a pause, then he has to rush to Delhi. Clever, isn’t it?

My ultimate dream: a sting op on Mulayam Singhji. Bole toh it will shock everyone, like my threat to resign from the SP.