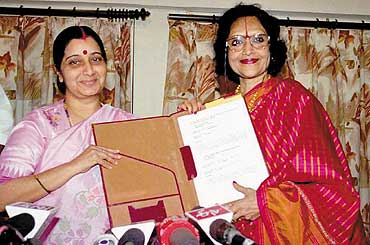 outlookindia.com
-0001-11-30T00:00:00+0553
It's difficult to assess the precise moment when you actually transcend the borders of fame and step into the realm of infamy. But this time, the National Film Awards seem to have made the shift effortlessly. While it was the best actor (Anil Kapoor, Pukar) and best actress (Raveena Tandon, Daman) award that topped the objectionable list, the uproar that has surrounded the event is unprecedented in its 48-year-old history. What with three jury members—filmmaker Pradip Krishen, cinematographer Shashi Anand and danseuse Madhumita Raut—walking out of this "premeditated" scrutiny of national celluloid excellence. Their principal gripe: flagrant saffronisation, Bollywood interference and coterie politics. Soon, award winners followed suit: director Gautam Ghosh and thespian Soumitra Chatterjee returned their awards (the former for best Bengali film for his Dekha, while Soumitra spurned the special jury award for his role in the same film), distancing themselves from the tainted event.

Actor Dhritiman Chatterjee, opting to stay within the 16-strong jury, has, however, decided to write a note of dissent to the President. He emphasises his nod to the final selection is "conditional" upon the National Film Directorate clarifying its position. The dissent is due to the fact that both the best actor and actress awards went to films which were either rejected by a group within the jury or screened only partially. "At the bottom of it all lie various vested interests," says an infuriated Chatterjee.

But then, such awards have always been a hotbed of ministerial manoeuvrings. "Political agendas have always subverted the awards and will continue to do so till the ministry controls the show," says director Mrinal Sen. "But this time it's been a little too brazen." Moreover, aggressive lobbying also makes business sense for the producer/financier—it's easier to grab attention with films that receive the jury's 'recognition' and it even helps in claiming tax-free status.

Even jury chairperson Vyjanthimala Bali is a bjp member while Raveena too espoused the cause of a bjp MP in the last elections. Then there's the fact that the panelists have no standing to dole out awards for technical finesse. "The awards are for artistic merit, the jury can't afford to bring in outsiders," says Aruna Vasudeva, editor Cinemaya.

Although the Hindutva agenda was palpable from day one, it was only when four films—Daman, Pukar, Bharati and Nuvve Kaavaali—were resuscitated after being rejected unanimously by a 4-member panel that the rigging became overt. "You don't exactly leap on your seat when the chairman hardsells the Hindutva missive of a pathetic animation flick, Pandavas. But you realise the charade of voting when all four trashed films bag the honours," says Krishen. In fact, after Krishen's resignation, the awards committee called him and pleaded for his return. "They said that after I come back the jury will vote 'with conscience'. Isn't that an admission that decisions were premeditated?" he asks.

In order to have a more competent jury, director Shyam Benegal feels the directorate should cast its net wider. "There should also be regional pre-selection, just like the Indian panorama. That'll ensure that all panelists get a chance to see every film in totality." But will that help to clear out the garbage? Not entirely, but at least there'll be a check. Meanwhile, many hope this drastic turn of events changes things for the better.

A group that paves the green way to human development