Within the army, V.K. Singh’s ‘principled stand’ is pitted against his various faults 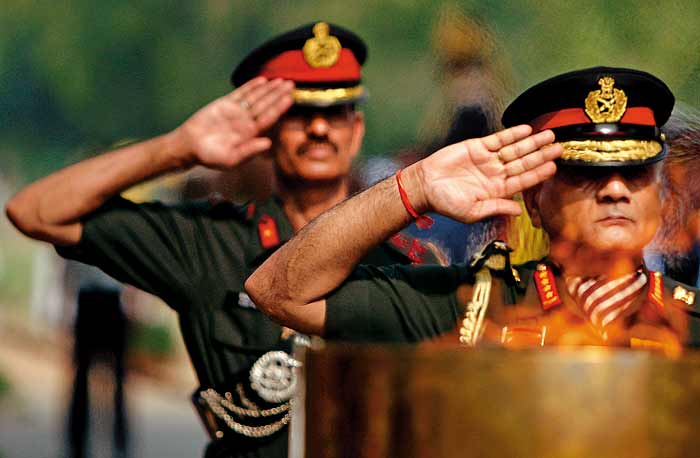 General V.K. Singh was at the Vaishno Devi shrine near Jammu on Wednesday, after wrapping up a farewell visit to the Kashmir valley. In the evening, he performed a small puja to seek blessings from the goddess. Divine help might be in order, given his bitter battle with his political bosses in New Delhi. For now it seems the gods are on his side. Fluctuating public perceptions aside, the defence minister was forced by Thursday to express his confidence in him, quelling all talk of an early exit. His embroilment in the date of birth fiasco was seen as a battle over a personal issue. That changed with his salvos against alleged corruption in the army. These evoked a mixed response, with some criticism of their public nature, even before his leaked letter to the PM. But there is also a grudging admiration for what many see as an honest man standing up for his principles. Many serving and veteran officers are outraged at the “frame-up of the general”. “After a long time we have a chief who’s taking up contentious issues,” says a young major. “At least he’s drawn attention to them, unlike previous chiefs, who lined their own nests.” This surge of opinion in Singh’s favour appears to have restrained the government from taking drastic measures to rein him in. That was one battle won.

V.K. Singh lacked exposure to the interface between the army and the political bosses, and thus with the MoD.

Yet, there is some disquiet among senior officers at the controversy playing out in the national media. “He has made a spectacle of the army by fighting a battle through the media. It’s done more harm than good. The means don’t justify the end. We don’t even know what the end is. Has it done anything better for the forces?” asks a general. Many ask how a person like him, who had missed his first promotion board from brigadier to major general—implying the assessing panel didn’t clear him at first—reached the top of the pyramid. A former commander based in Chandigarh says, “VK had only one agenda throughout his tenure and that was to manage his date of birth. It’s clear he’s making these disclosures to spite the government. He’s been following this line ever since his statutory complaint was rejected by the Centre. It’s sad that despite everything going for him, he’ll be remembered as the most controversial chief ever.” A view is gaining ground that the general is positioning himself for a post-retirement plunge into public life.

Few know Singh hadn’t had any senior-level tenure in army HQ before this. His only appointment in the capital was as a junior Lt Col in the military operations directorate. Almost all his postings have been in active field formations, where he honed his skills as an officer, but lacked exposure to the interface between the army and the political leadership, and is thus clueless about the army’s equation with the MoD. His detractors say he has no understanding of political processes or how things work at the top level. “In our diverse political set-up, the chief is expected to know how to work the system to get the best for the army, instead of getting into a confrontation,” says a peer. It’s largely this insular nature of his career profile that may have led to the present situation, they say. But others use the opposite argument, and say that someone more attuned to the workings of higher defence circles might not have been appalled at the sorry state of affairs and was more likely to maintain the status quo. An officer points out, “Seeing how things are playing out, it is a blessing that he did not serve in the army HQ earlier, or else who knows, the arms lobbies might have won him over by now.”