Home  »  Magazine  »  National  » Cover Stories  » Interviews  » Interview »  'The RSS Training Made Me A Better Officer. There Are Many More Like Me.'

'The RSS Training Made Me A Better Officer. There Are Many More Like Me.'

'We were RSS boys who were trained to become soldiers... I don't believe all that I read about Lt Col Purohit. He's innocent until proven guilty.' 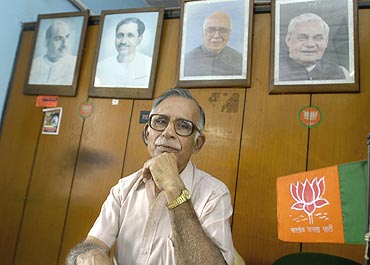 Sandipan Chatterjee
Saikat Datta November 24, 2008 00:00 IST 'The RSS Training Made Me A Better Officer. There Are Many More Like Me.'

outlookindia.com
-0001-11-30T00:00:00+0553
When Col Sabyasachi Bagchi (retd) was inducted in 1963 as an emergency commission officer into the Jat regiment at the age of 23, he had already been a member of the RSS for 10 years. Having served the army for 27 years, he sought voluntary retirement in April 1990, went back to Calcutta and joined the BJP a few years later. He was their Lok Sabha candidate from Calcutta in 1998, but failed to win the seat. He continues to be the party’s political official in Calcutta. In a conversation with Saikat Datta, the retired colonel revealed the names of five other RSS members from Calcutta who joined the armed forces and recalled how the outfit prepared them for a career as a soldier. Excerpts:

"I joined the RSS when I was in the eighth standard. I must say the organisation instilled a sense of patriotism in me and helped build a character. This helped me do well in the military. I was not the only one who joined the armed forces from the RSS. During my time, there was the late Group Captain Manoj, who was also with the RSS before he joined the military. There were many others like us who joined the services from Calcutta and from other cities and towns across the country. The Sangh actually encouraged and prepared us for the task. We were RSS boys who were trained to become soldiers.

I don’t believe all that I read about Lt Col Purohit. He’s innocent until proven guilty. Unfortunately, there are vested political interests financed by sources in West Asia who are trying to undermine the army. Earlier, books like the Mitrokhin Archives (in which a former KGB agent alleged that Congress and Communist leaders were paid off) have revealed such vested political interests. So let us not jump to any conclusions. We must wait till the case against Purohit is decided in court.

You can’t have development if your borders are not safe. Which is why the protection of the state from external as well as internal aggression is paramount and only the army can do that job. We, as a party and as an organisation, are most concerned about strategic issues while other parties only talk about the military for their vested interests.

People frequently mistake the RSS for a political organisation. It is not. It is an organisation that helps build character and I feel that there is a definite need for such a character-building organisation in the country today. I never faced a problem because I was a member of the RSS. In fact, it continued to give me mental inspiration and I was in a position to implement my ideas as a commanding officer. When I was posted in Calcutta as an NCC officer, I inspired several boys to join the army, motivating them with the ideals I had imbibed from the Sangh.

I believe the Indian armed forces must have a say in nation-building. Look at my party, the BJP. We are the only one with a separate defence cell that address the issues of the military. Swami Vivekananda says ‘I need men of character, courage and integrity and if I get them then everything else is taken care of.’ Through the RSS we can build such men and women."