The RSS In Nepal 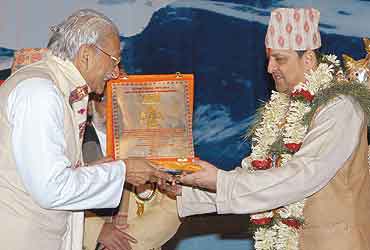 When Pandit Narayan Prasad Pokhrel was shot dead in Kapilavastu district on May 6, millions in Nepal who revered him as a saint reeled under shock and dismay.

For them, it wasn't just because of the death of a charismatic Hindu preacher who had mesmerised them with his oratory and erudition. It was also because the assassination brought to fore the simmering tension between different Hindu groups; the attempts of the RSS and its affiliates to curry favour with the palace; and the clash of varying worldviews symbolised by the Maoists and political Hindu groups.

Unknown in India, Pokhrel boasted a veritable cult following here. Utilising his enviable oratorical skills, and his knowledge of the Puranas and the Upanishads, the 48-year-old preacher mobilised massive resources to build schools, hospitals, orphanages and roads in rural Nepal. Such was his charisma that his mesmerised audience would rise in unison and dance to bhajans and kirtans. Out of trance, they would compete with each other to donate money to the project Pokhrel had announced at a religious gathering.

His ability to raise money, and the clout he exercised over the Hindu masses, incurred him the wrath of the Hindu Swayamsevak Sangh (HSS), the Nepal chapter of the RSS, and its innumerable affiliates, particularly the VHP. Their anger stemmed from Pokhrel's resolute opposition to their attempts to widen their base in Nepal and influence key power centres, including the palace.

But first, the details of the grisly killing. On May 6, Pokhrel's mission was cut short by youths riding on three motorcycles who riddled him with bullets, killing him on the spot. As news of the killing reached Kathmandu, intense speculations began on the identity of the assailants and their possible motives. Just about no one, other than the government here, was willing to give credence to the claims...