Airtel safe, it's time to move on to other things: airports, or agriculture maybe 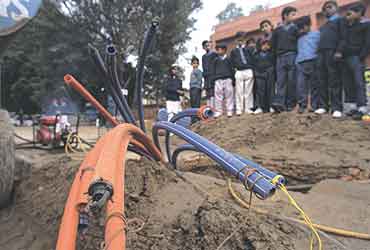 outlookindia.com
-0001-11-30T00:00:00+0553
I came into the telecom business when it was being opened for the private sector for the first time in the country. In 1982-83, we tried to force a change in the government's mind to allow the private sector in the manufacture of telephone sets in India. Finally in 1984, the government allowed telephone manufacture in private hands. This is when we stepped foot into an industry that was hitherto an exclusive domain of the government and no one had an idea of how a private company would fare in that arena.

As expected, many private companies jumped in and soon, along with us, we had companies like hfcl and others walking through the gates that had just been opened. Some foreign companies also came into the manufacturing arena then. That was the beginning of competition in the telecom sector in India.

But my real stint began in 1992-94 when telecom services were opened and the private sector was allowed to enter the game. It was a big challenge at the time to fight the monopoly of several years. That is when we started the Airtel service in India from our first circle in Delhi. Since then it has been a long journey in the Indian telecom sector through all its ups and downs and through thick and thin. Sitting at today's comfortable point, I appreciate how tough it has been to take the company from its first customer to the 1,000th, then to the 100,000th, to the first million and to today, when we have more than 10 million satisfied Airtel users in the country.

We've made a significant contribution to the Indian telecom industry and brought it to a stage comparable to any other in the world. It was a difficult time to convince customers to buy a service when the handset prices were above Rs 40,000 and a single call cost around Rs 16. It was also tough to get customers to pay for receiving a call, something they weren't used to in a landline regime of free incoming and low outgoing rates. 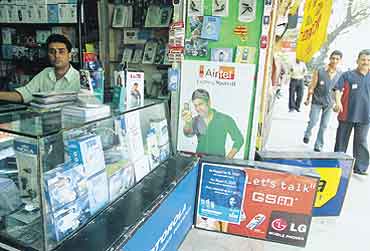 The challenges... The biggest challenge in the services sector is capital. Raising capital is always a tough job for any company, but in the telecommunication sector, it is even more tough. A lot of telecom companies have had extreme difficulties in raising the requisite amount of capital for operations. We were lucky that way to have good investors. Today, Bharti's total investment is Rs 15,000 crore and that is entirely because of these investors and their faith in the group.

The other big challenge over the last 10 years has been the regulatory regime. The sector was mired in regulation and to deal with the regulatory surprises and shocks was a difficult proposition for any company.

The third big challenge was to fight the competition from BSNL and Reliance Infocomm. Both of them were big players and although the market has enough space, having such big competitors was a big challenge. Looking back at these, it seems that the most important challenge of these was a combination of the regulatory googlies and the BSNL-Reliance onslaught in the Indian telecom market.

And CDMA... The distinction between technologies is irrelevant for the customer. The customer is technology-neutral and does not really care about what technology he is using. He is bothered about the quality of service he is getting from his provider. In any case, CDMA will never make it to the mass-market level the way GSM has. The world will now move to WCDMA and so we will also move to that platform so that we can provide services through newer technologies like 3G and not to CDMA 1X that is there today. Even the US where CDMA existed in a large way is moving to WCDMA.

3G and India... Cellular adoption will increase as the interface is getting more user-friendly and applications are increasing. Handsets are also getting smaller and easier. Despite the doubts that are present now, 3G will be a reality in India.The licensing and other issues are getting cleared now and India will be ready on 3G in 18 months' time.We are exactly at a point where GSM was in 1992-93 when telecom services were being opened up in India. 3G could be a bigger reality and once content and applications—two key elements—fall in place, it will become more popular than other technologies. And that has already begun. Applications like mobile ticketing, and m-commerce are a reality today.

The next 10 years... Telecom is getting to a point where it will no longer be just telecommunications. One device would be ubiquitous and will be used for just about everything rather than the voice and SMS that we know today. One device would use the Internet to get medical records, stock prices, commodities, shopping, everything. It will be the most important device in people's lives. Look at what's already happened. The biggest camera seller today is Nokia, not a camera company. Things would change drastically before we realise.

In 2015, I'M... Certainly not going to be doing telecom. In two years, we'll establish a young leadership at Bharti. I will guide the ship but not have an active part in running it. I will try and fulfil my other dreams—airports for one, which I have long cherished. And who knows, agriculture maybe. I already have made an entry into this field with my export venture. My supply chain for exports may help in retail. Who knows?

(Sunil Mittal is the chairman of Bharti Enterprises, which runs the country's largest telecom network spanning 16 states and 21 circles under the AirTel brand. He spoke to Arindam Mukherjee.)

It's A Big World Out There