The Root Of All Good

Most of us feel and fear our dependency on others (society), and seek security, power and "independence" in money. 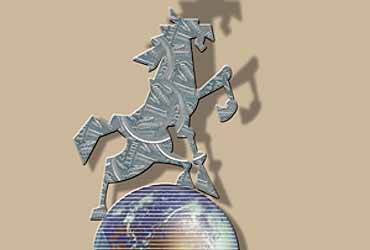 illustration by Jayachandran
Sanjay Sachdev March 17, 2003 00:00 IST The Root Of All Good

outlookindia.com
-0001-11-30T00:00:00+0553
Money is one of man’s greatest and most important creations, without which civilised society would be unthinkable. Most of what we do is either for or with money. Money doesn’t only make the world go round, it also determines where we are going and how we are getting there. Money not only satisfies our material needs (and wants), but also many of our psychological and social needs (and wants) as well. It largely determines our status amongst family, friends and acquaintances, as well as in society. Money is the most versatile form of power. If we have enough, it gives us the illusion of being independent, since we are able to take (buy) from society whatever we need or want. We can buy other people’s time and skills. Most of us feel and fear our dependency on others (society), and seek security, power and "independence" in money.

A recent UNCTAD study shows that 29 of the world’s largest economies, measured by value added, are corporations. That means Nigeria’s 100 million plus people generate less wealth every year than DaimlerChrysler; Chile’s output is comparable to Exxon’s. By some measures, the combined wealth of Pakistani ceos in California exceeds Pakistan’s gdp! The power of money is evident. Money makes the developing world grow—and the fact is that the developing world is critical to the future of big business. Four out of every five consumers already live there, and 63 million of the 64 million people being added to the planet every year are in developing countries. In today’s world, there is a rapidly expanding role for wealth, in helping finance and sustain development across the globe.

The power of money drives the world of philanthropy, one of the world’s most distinctive virtues. There are large pools of untapped private money available for investment and development purposes that have the potential to be more stable and sustainable than hot money investment flows. One source is charities, foundations and some wealthy individuals. In the US alone, some $30 trillion will change hands in coming decades as older, wealthier generations die and seek to disperse assets. Much of that—driven by tax incentives—will go into charitable pursuits.

Money has always played, and will all the more play, a critical role in the fields of invention, education, medicine, research and development, infrastructure development and growth. Money plays a critical role in providing a systematic support for building domestic capital and business in developing countries. Money has an important role in helping public and private partnerships commensurate with the scale of demand in a world where more than a billion people do not have clean drinking water or sanitation and two billion do not have electricity. One of the more encouraging outcomes of the recently held Johannesburg Earth Summit was the announcement of 220 partnerships, involving a mix of private and public sector and other partners like ngos.

Money plays a critical role in helping our governments reduce poverty, invest in their people, and create conditions for stability and growth that are so essential for future prosperity. Today, governments and individuals across the globe have an unprecedented chance to dream—and dream big. They have an unprecedented chance today to reach out and do something different. And it’s the power of money that can help them achieve this. No one understands and values the power of money more than governments of developed countries, who are today grappling with serious issues like healthcare, sanitation, education, aids, war, draught. Money gives these governments the much-required resources to adequately and timely address these issues. Money gives these governments adequate capabilities to plan for the lives of millions of their citizens, who in turn can dream of a better and healthier quality of life.

Indeed money, if used wisely and effectively, can alter the lives and destinies of millions. So whether money is the root cause of all evil or of all good—the answer lies in the hands of the user. The world has been a witness to both. It is critical to remember that the only power money has is the power we give it. Money is only a tool. It takes us wherever we wish, but it does not replace us as the driver. It gives us the means for the satisfaction of our desires, but it does not provide us with desires. Money does not purchase happiness for the man who has no concept of what he wants; money does not give him a code of values, if he’s evaded the knowledge of what to value; and it does not provide him with a purpose, if he’s evaded the choice of what to seek. Money will not buy intelligence for the fool, or admiration for the coward, or respect for the incompetent. The man who attempts to purchase the brains of his superiors to serve him, with his money replacing his judgement, ends up becoming the victim of his inferiors. The men of intelligence desert him, but the cheats and the frauds come flocking to him, drawn by a law which he has not discovered: that no man may be smaller than his money.

Winston Churchill once said, "Some regard private enterprise as if it were a predatory tiger to be shot, others look upon it as a cow they can milk. Only a handful sees it for what it really is—the strong horse that pulls the whole cart." Money is that strong horse that pulls the cart. Money is the root cause of all good—provided we use it wisely!

(The author is CEO and MD of IDBI Principal Asset Management Co.)

The Root Of All Evil