The Root Of All Evil

My own experience as a political aide to a minister taught me to keep quiet when bundles would have 95 to 97 notes in them. This was called "democratic money". The missing notes were called "income tax". If this is not evil, then what is? Black, oily 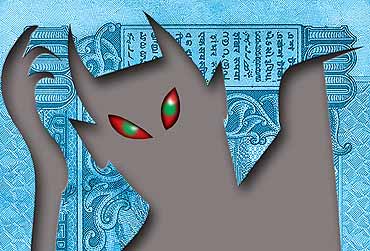 illustration by Jayachandran
Veeresh Malik March 17, 2003 00:00 IST The Root Of All Evil

outlookindia.com
-0001-11-30T00:00:00+0553
Sure it is. Especially if evil is about damaging others vindictively and with malice aforethought. Particularly in India, where there’s probably no estimate of how much evil has been caused to people by multiple tungsten-steel staples on currency notes, or by financial organisations out to gouge middle-class depositors. It’s obvious that in our context, money takes on more importance than Dhana Lakshmi’s one-eighth role in the Ashta Lakshmis justifies.

And that tends to stifle the other seven. That is surely bigtime Evil # 1. Which is why, among other things, poor Saraswati is repeatedly forced to go and remain underground. Here, as elsewhere, money on its own tends to overpower and destroy the other good things in life like education, risk-taking ability, joy of existence and friendship. But then comes the next question: hey dude, because you have it, you say money may be evil, but what are all these other holier-than-thou attributes worth without money? For example, who would buy Outlook without money? Money begat security, right?

Fair enough. But money tricks everybody. She (or is it a ‘he’?) is not necessarily permanent, and is not the obvious route to security. I would call money in all its forms evil because he (or is it a ‘she’?) reinvents itself ever so often like a transvestite changing appearances, changing the rules of the game without notice. Salt was money, it dissolved. Stones with holes in them were money, they sank. Gold was money, it destroyed civilisations. Currency is money, it tends to vanish overnight due to unconnected political events. Don’t even talk about savings or property. All these quick-vanish forms of money: how are they any better than your bus-riding pickpocket?

An aside: gold especially is very evil. It makes nobility out of savages, and then people have nothing to eat any more as they prance around in their finery, getting beaten by old women wearing leather and rubber. Ask the Brits. In fact, like rice and bread, it has been proven beyond doubt that 99 per cent of all adultery has taken place while thinking of bread and gold. Is adultery evil?

So, inference drawn is that the passionate love of money is positively the root of all evil, except coveting your neighbour’s ass, which is yet another unrelated Biblical reference. Actually, I did not say that. Hegel and Marx also didn’t say only that. Most philosophies and religions tend to preach the same, and then they also tend to go about amassing more monetary wealth than anybody else. Successful commercial religions have the best marketing managers in the world, who go about preaching the benefits of an austere lifestyle, make you part with your money, and then become the world’s richest landlords, generating even more money. As a matter of fact, if history is anything to go by, it is this symbiotic relationship between religion and money that is at the root of most wars. Current thinking being that religion causes war, war is evil, evil generates violence, violence needs money, and money is what makes religion tick. Very confusing. Confusion also causes evil.

Of course, there is also "our oil" below "their sand", and that is what makes money so greasy. Also sticky, as any babu in "cash-dealing" will tell you. My own experience as a political aide to a minister taught me to keep quiet when bundles would have 95 to 97 notes in them. This was called "democratic money". The missing notes were called "income tax". If this is not evil, then what is? Black, oily money, yuck!

But wait. Let me assure our gentle readers that I am not making a case towards not generating wealth. Where I am coming from is celebrating in one lifetime the widest possible passion towards the friction-free discovery, celebration and distribution of wealth, of which money is an important part. The more I amass, the more I realise that the icons are a-changing. Fame, for example, is a form of currency, increasingly gaining on money. Increasingly as counterfeit, too.

What remains then is that varying intangible born out of discipline and personal "dharmas" (as opposed to commercial philosophies), called "wealth".

And wealth is what you pick up between the ears as the years go by, and travelling with an open mind is just one method of ensuring this. Money, on the other hand, is what you think will give you security, but often ends up doing the opposite. In our blind rush for money, we blindside ourselves to other forms of wealth, which is evil, and by the time we realise it, we are too old to enjoy the money or do anything about it other than pray to religion to save us. Which, interim, is amassing more money, usually yours.

So, aim to make as much money in a lifetime, but as a means of increasing your overall wealth. Some of the present and many of the coming generation have understood this. Many of my generation may not, but we shouldn’t be blamed for carrying the baggage of the socialist environment we grew up in.

Go out and make money. But don’t staple your life to it—that’s evil. You will get bad teeth and somebody else’s bad breath. Trust in God, but tie your camel first, which is yet another religious reference for the uninitiated, praise be on them.

(The author heads the Asia operations of Infonox. The views expressed here are his own)

The Future Of Money