If BJP gets within striking distance, will Modi be able to do a Vajpayee, get the allies? 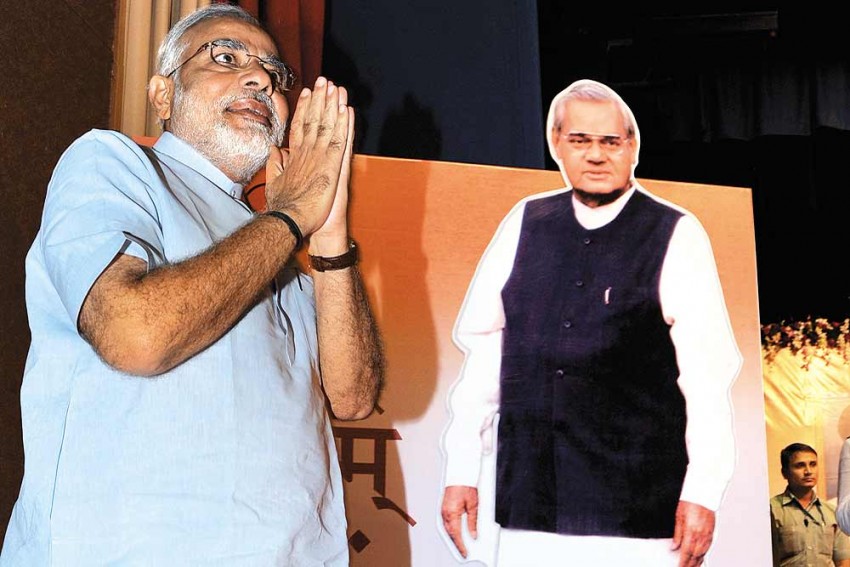 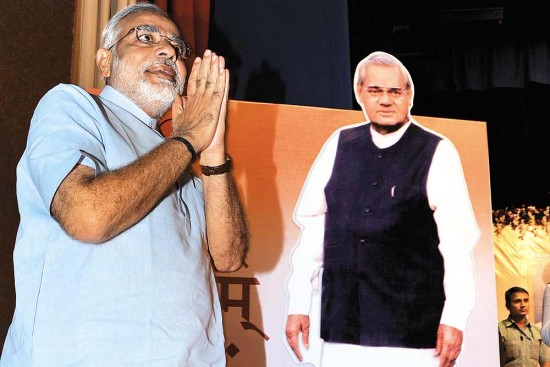 Can Narendra Modi do a Vajpayee and bring more allies to the NDA table in a post-election scenario? The apparent collapse of goodwill for the UPA and the resultant surge in the popularity ratings of the BJP has led to some significant small parties already crossing the “untouchability” boundary and coming across. But whether or not Modi succeeds in repeating the Vajp­ayee formula (strictly in terms of allies) will depend on the number of seats the BJP gets and the arithmetic of the next Parliament. Should no alternative seem possible but for a regime led by Modi, then certainly regional parties who are out of the NDA formation now—such as the BJD and AIADMK—would have great scope to bargain: they could consider extracting their pound of flesh, seek protection and largesse by either joining the regime, giving outside support, or even subsequently, on a session-to- session basis, becoming part of a proc­ess that ensures a minority regime doe­sn’t collapse on the floor of Parliament.

In 1996, Atal Behari Vajpayee had three allies and his government lasted 13 days. In 1998, when it had become clear that other alternatives were non-viable, the BJP-led NDA had 22 allies, a figure that swelled to 26 in 1999. The entire exercise of government formation was marked by the pragmatism of regional parties who decided to join the NDA platform. It was also carved out with the cooperation of veteran socialist leader George Fernan­des, who worked on the anti-Congress­ism of the socialist bloc and other parties and used his own image to enhance the acceptability of the BJP. The regional parties also underwent an elaborate process of cobbling together a common minimum programme that left contentious ideological issues off the table.

There has been no such process now and it is expected that allies would join (or not) on the basis of a practical ass­es­s­ment of their own self-interest—to be calculated after the results come on May 16. The question of minority sentiment of their own voter blocs could be the only impediment to many parties. As BJP spo­k­esperson Ravi Shankar Pra­sad put it: “Even the Mus­lims in Gujarat now feel safe and pro­sperous...so there is no reason why Modi cannot do what Vajpayee did. But ultimately it will all depend on the numbers.” 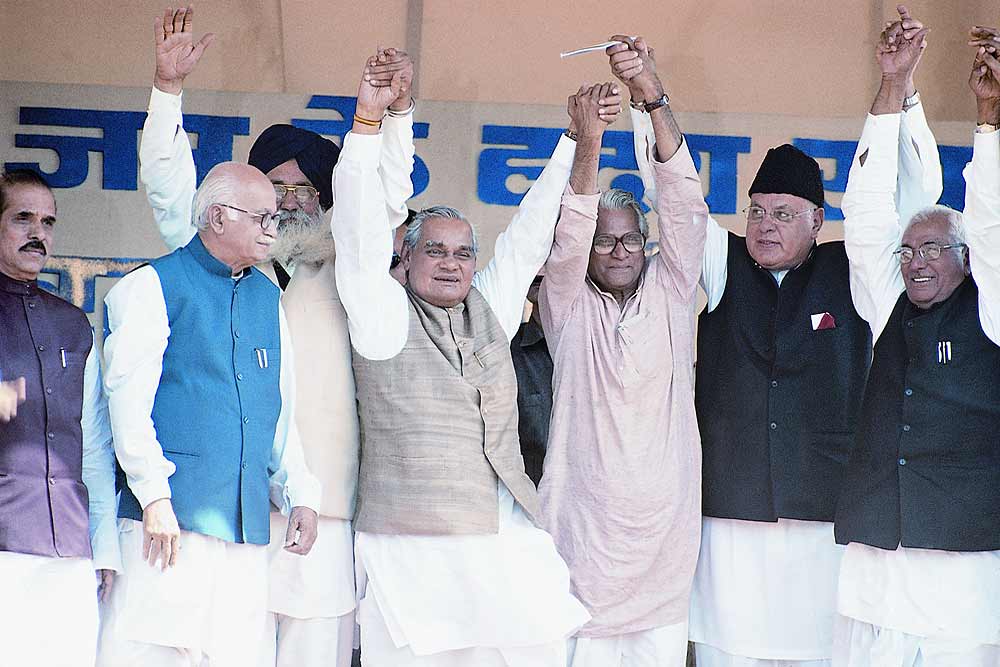 Indeed, if Modi were to succeed, it would have been quite a significant journey for the BJP itself—having had to go with the “acceptable” face 15 years ago to the persona of the current PM candidate. There is ano­t­her significant difference in the appr­o­aches of the-man-who-was-PM and he-who-would-be-PM: because Vajpa­yee was fundamentally a moderate, he used the allies to strike bargains within the BJP. In Modi’s case, there can be no such positioning. He will try to get all­ies on board mostly using the federalism card (see box) and offering covert and overt packages to the states. This could vary from packages for specific regions and states, ministerial berths, clearances for certain policies and, never to be underestimated, the clout of putting the CBI on a leader currently facing charges or potentially facing some.

What is also most significantly different about the Modi situation is that one can predict a future where there will be a small group within the BJP waiting to torpedo the leader. The recent shenanigans over the seat allocation to 86-year-old L.K. Advani is an indicator of a larger problem of certain leaders who are quietly seething and may, from time to time, feel the need to be appeased. And were the numbers to be unimpressive, this group could certainly prevail on the party and parivar leadership. Sources say that if the BJP numbers are below 160, there will be a strong argument within the RSS to abandon the Modi project. 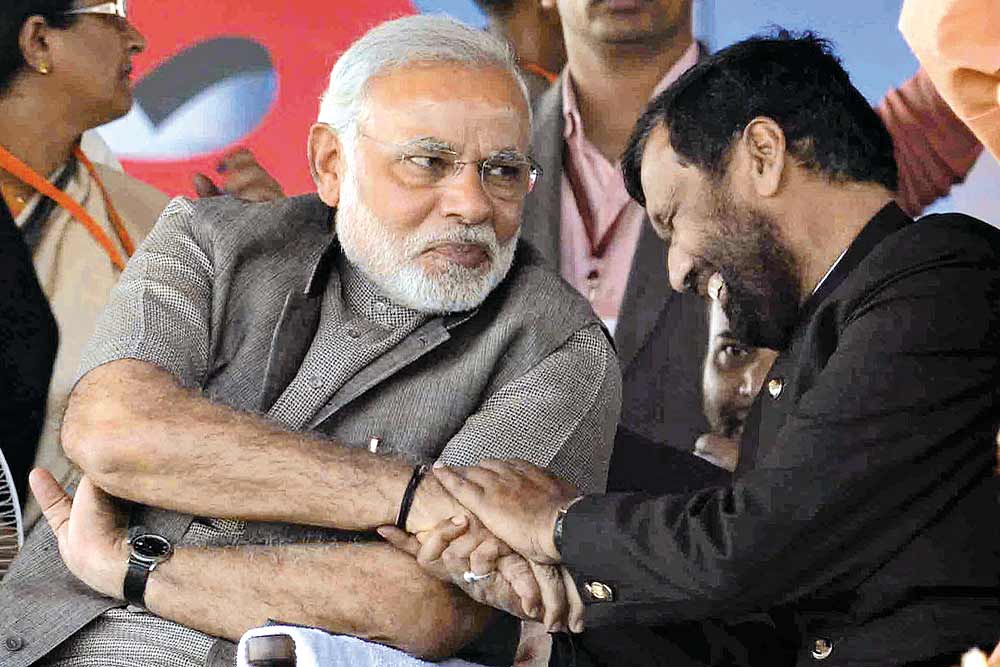 Vajpayee too faced consistent chall­e­n­ges from within the RSS and a small faction in the BJP that was more loyal to Adv­ani. Yet he made things work because he was a consensus man with vast experience of Parliament and personal relations across all political parties. He was a conventional politician in a party that then had no sort of governance record.

Sixteen years later, several BJP chief ministers have proven that they have a good grip on administration and the business of building infrastructure. The 2002 riots and Modi were considered by Vajpayee to be the most significant reason for the NDA’s defeat in 2004. Today Modi himself seeks to cross that barrier in an enterprise that has impressive backing from the corporate sector. Vajpayee’s project too was significantly helped and piloted in its early days by the Hinduja group and the Ambanis, the latter now having had a hand in every regime across political parties.

But whether Modi can do a Vajpayee will basically depend not on personality or morality but on pragmatism and brute numbers in the next Parliament. If one were to do some crystal gazing and ask whether the two men have similar destinies leading to the PM’s office, there is yet another possibility that looms large. Should the BJP do well crossing its own 182-seats threshold but fail on the issue of alliances, would a potential Modi reg­ime then collapse (like Vajpayee’s did in ’96) in a confidence vote? Modi’s strateg­ists believe that if it appears he has done well and is still being kept out by regional parties concerned about the minority vote, then the ‘next election’ will lead to an even better result for a Modi-led BJP.

Yet this scenario only factors in the com­munal/secular question and doesn’t address the question of whether there is any damage to Modi’s image by the constant foregrounding of issues like corru­ption and governance models by a force like aap, and now even the Congress. The ruling party, in its last days, has chosen to change tack somewhat in the midst of the campaign by shifting from talking about its own achievements to now targ­eting the persona of Narendra Modi.

Smoke On The Bioscope