The Ritz Has Wings

In-flight opulence and economy meet in the A380 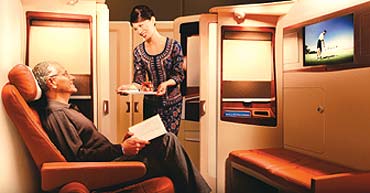 It can be termed a mid-air revolution. Trailing behind Boeing for decades, Airbus has set a new benchmark in aviation history with its new A380 superjumbo starting commercial flights for Singapore Airlines last month, thus resetting in-flight standards and bringing the promise of simultaneously lowering operation costs. With the largest passenger capacity ever of 525 spread across different classes, including a dozen luxury first-class suites and redefined business class, the A380 superjumbo is today emblematic of the most significant advances in commercial aviation.

In fact, its European manufacturer Airbus sas claims that the A380 is also the most fuel-efficient and the quietest passenger jet ever built, considering the sheer volume of passengers and cargo it can transport.

The two-year-late delivery of the A380 to Singapore Airlines earlier this month marked the culmination of Europe's biggest industrial project that took seven years of effort and cost 11 billion euros ($15.5 billion). But the wait was worth it: Singapore Airlines will gain the exclusivity of being the plane's sole operator for the next 10 months, after ordering 25 A380s at a price of $8.6 billion.

Cut to the vital statistics of the A380: at first look it resembles a monstrous double-deck leviathan 72.7 m long, 24.1 m high and 79.8 m wide, with a maximum takeoff weight of 468 tonnes, comparable with a herd of about 80 adult male African elephants. Despite its mammoth size, A380's silken-smooth takeoff is sheer delight, with hardly any roar or upheaval.

Comparable to the luxury cruise-liners elegantly sailing on the French Riviera, a tour of the A380's upper classes is an experience in itself. Airbus has introduced 12 premium first-class 'suites' towards the front of the aircraft, each of which is enclosed by sliding doors and fitted with leather-upholstered seats, a table, a 23-inch flat screen TV, laptop connections and a range of office software.

The suites have room for both a 35-inch extra wide seat and a separate 6' 6'' flat bed. For couples booking adjoining suites, there is provision to join them to provide double beds, which are covered with Givenchy sheets. "This kind of luxury is unbelievable on an aircraft and I am having the time of my life as these suites are so private and exclusive," said Tony Elwood from Perth, lolling in bed in a double suite, sipping his Dom Perignon with his wife Julie Elwood. (That gentle moonshine seemed to flow—or is it glow—non-stop in these blessed corridors.) Elwood was happy to have paid the auctioned fare of $50,000 and having won the privilege of an exclusively prepared gourmet lunch of marinated lobster.

Singapore Airlines had auctioned most of the seats on the inaugural flight on eBay and raised $1.26 million for charity. So the Elwoods' next-door neighbour was millionaire Julian Hayward, the highest bidder who bought two suite seats for $100,380. The first passenger to board the flight, Hayward said, "I'm extremely excited to have the opportunity to be flying on such a large feat of engineering. I have been treated like a king and fed caviar all day!" The business class situated on the upper deck looked straight out of the Orient Express, with passengers lounging around the bar sipping single malts while enjoying the world's widest business class seats that can also be transformed into a comfortable full-flat bed.

Back to ground zero in economy, I learn the plane can accommodate over 850 passengers in an economy class-only arrangement, but Singapore Airlines has restricted the number to 471 in favour of extra space in the economy class too. "My father spent $2,600 for our trip. I am so excited as this flight is historic. I hope to be a pilot soon and fly an A380 someday," said an ecstatic 15-year-old Anmol Gupta, sitting next to his beaming father, Kapil Gupta. 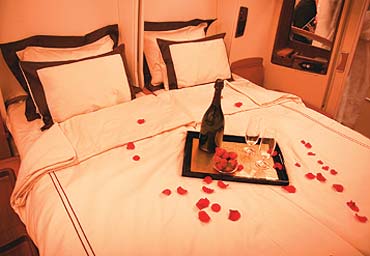 As for the global economics of the giant omnibus, critics aver that like the Boeing 747 that revolutionised international air travel in the 1970s by making it accessible to millions, the A380 too could bring down fares in the economy segment. Although some experts also believe that Airbus is pursuing the wrong strategy by producing the superjumbo in a market that is more likely to be interested in smaller and mid-sized planes. "There is space for both," said Thomas Lee, aviation expert on-board the A380. Lee, who speaks with the experience of one who has also flown the inaugural flight of Boeing 747, feels there is room for both superjumbo and smaller planes.

In the Indian context, given the eagerness of operators to begin long-haul international operations, the A380 is set to play a significant role in the plans of all major airlines—be it Air India, Kingfisher Airlines or Jet Airways. Currently, Kingfisher is the only airline to have ordered five A380 aircraft for delivery in 2010-11. Air India is also in talks to buy 10-12 A380s.

Airbus chief executive officer Thomas Enders says, "India is one of the most important growing markets for us and we are in discussions with Air India now." Lee adds: "Global air traffic is expected to triple in the next 20 years. With a major portion of that growth coming from India, it is but natural that Air India is interested in purchasing such long-haul aircraft. If Kingfisher and Air India want it, could Jet Airways be far behind?"

A major hitch in the plans of Indian carriers could be that no airport within the country is currently equipped to handle the superjumbo, although a display A380 was flown to Delhi and Mumbai airports earlier this year. Hyderabad will be the first Indian airport capable of commercially receiving A380s by March next year.

Which means Indian passengers will have to wait for some more time to get a feel of this ultimate in-flight luxury.