The Rites Of Passage

Shastri and Gulzarilal Nanda, the men who wouldn't be 'king' 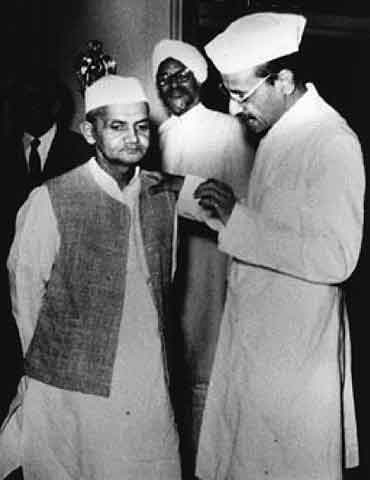 THE first, soft blush of idealism was by now paling, and pangs of self-doubt ever lurked beneath the surface of a maturing India. By the 1967 Congress defeat in half-a-dozen states, the coalition of middle peasantry and intelligentsia that had brought freedom to India had begun to splinter. A decade inaugurated by the "temples of modern India"—Bhakra Nangal, the Damodar Valley project and Farakka Barrage—ended with India turning in desperation to the IMF in 1966 for loans to meet the massive fiscal deficit. From the apogee to the eclipse of Nehruvian consensus, it was a rude awakening.

Till the spoils of the Green Revolution—overflowing god-owns after years of drought—brought a whiff of optimism in the '60s, this was the decade when the gods died. The Chinese invasion of '62 reduced the pious slogans of NonAlignment and Panchsheela to tatters. V.K. Krishna Menon, Nehru's advocatus diaboli, lost both his portfolio and dubious claim to greatness and at the Bhubaneshwar session in 1963, Nehru had a stroke. Once the dashing heir of the Mahatma, by the time of his death in 1964, Nehru was a broken man, his jaws slack, his resolve diminished.

Yet, enough conditions existed for the demise, of the Man and his Age. Nehru was so barren of ideology or independent thought that he remained a captive of his own limitations, a prisoner of the British worldview. To him, "Hindi-Chini bhai bhai" was a natural expression of the bond that should exist between two Third World giants. New Delhi persisted in casting itself as Big Brother, a misconception fostered by the British campaign to project Nehru as a leading global statesman. Tragically, amid the great technological leaps of faith, the new development ministries—so crucial in a newly independent Asian country—were relegated to the background.

When Beijing assumed—on good grounds—that the building of a road in Aksai Chin would be accepted without protest in the context of the "thousand years" of friendship, Nehru didn't quite demur. He dismissed Aksai Chin as barren territory where "not a blade of grass would grow". When the massacre of the Indian police party occurred about 50 miles within Indian territory, fault lines appeared in Nehru's idyllic vision. Outraged public opinion led Nehru to concede, "We had been living in an artificial atmosphere of our own creation." Foreign policy had been an esoteric subject until now, best left to Panditji and the best and brightest in South Block. Yet, it was a policy based on unreal perceptions, one that relied on a colonial vision of the world, and was evidence that Nehru's regime had no convictions of its own.

When Beijing proposed that the MacMahon Line should be renegotiated, if only to rename it, Nehru was unable to understand the psychological force behind the move. The MacMahon line was a legacy of the Raj and needed to be recast. Yet, Nehru saw it as sacrosanct, loath as he was to tamper with the political and administrative devices of the British whom he so admired. The Indian bureaucracy was another colonial structure that Nehru refused to reform.

For Nehru, political independence didn't mean social or administrative change; his was a policy of "no change". India's first prime minister was a good and decent man, but he was not a leader of an independent nation. India's transition from colony to sovereign nation was an elite coup: the leaders changed hands, the brown hands of Macaulay's children took over the reins of power from white ones, but the urgent need for social, administrative and political independence, in the truest sense of the word, simply didn't happen.

In civil society, Indian creative expression began pushing at the frontiers of freedom. Satyajit Ray's Pather Panchali had a record run in New York, the National School of Drama was set up and astrophysicist Jayant Narlikar along with British scientist Fred Hoyle propounded the revolutionary theory of gravitation that seemed to challenge Einstein's theory of Relativity in 1964. Nehru's death came at the end of a period of cultural regeneration if political stasis.

Shastri's inheritance was a troubled one. In '64, when he became PM, popular despondency at Panditji's death capped recent turbulences. The "peaceful" liberation of Goa from Portuguese hands in '61 had been controversial. Nehru's invitation to the RSS to participate in the Republic Day parade in '63 was seen by the intelligentsia as a blow for his own secular democratic ideal. A large number of CPI leaders had been imprisoned by Nehru and in '64, with the looming shadow of "imperialist" China, the stage was set for the communist split. The CPI(M) was born.

Yet, the frail little man from UP was a man of destiny. A year after the Vijayanta tank was unveiled in '64, Pakistan stole into the Rann of Kutch only to be beaten back. Later, when it launched Operation Grand Slam to try and wrest Kashmir yet again, Indian troops rampaged over the enemy. After the famous Sialkot tank battle, Indian tanks reached within striking distance of Lahore. Shastri became a hero, at least in north India. In Madras state, anti-Hindi riots were posing another threat to an already fading Nehruvianism.

By the 1967 polls—jumping over Shastri's death at Tashkent, and the second Gulzarilal Nanda interlude—the Congress' constituency was shrinking. The Jai Jawan Jai Kisan mood was, ironically, accompanied by the peasants of north India deserting the Congress. Indira came to power on a slender majority, losing many states to the Opposition.

At the extremities, Nehruvianism was being supplanted by alternate ideologies. In '67, the DMK won in Madras state on an openly anti-Hindi plank and the first Left United Front government was installed in West Bengal. Nehru's vision had cracked and, by the end of the decade, and all the turns of history, the onus of proving India's "greatness" seemed to be in the dexterous hands of Bedi, Chandra, Prasanna and Venkataragha-van, cricket's famed spin quartet.

Swaraj Is My Birthright