The Right Lessons From The Left

Though some of his estimates are rather ambitious, Chidambaram seems to have learnt to temper growth with distributive justice 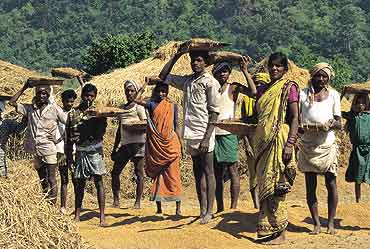 outlookindia.com
-0001-11-30T00:00:00+0553
The problem with trying to please everyone is that one could end up pleasing precisely no one. That is because the happiness can get spread so thinly that it is easy to ignore it altogether. When I used these words to describe the Union Budget for 2004-05 to Finance Minister Palaniappan Chidambaram, he was not amused in the least. He was appearing on a panel discussion on Doordarshan News and dared me to point out how he had tried to please different sections and, in the process, ended up disappointing most. Sitting next to him in the studio were Yashwant 'Roll Back' Sinha of the BJP and Nilotpal Basu of the CPI(M). By the end of the session, Chidambaram had vociferously refuted all the points of criticism against his third budget. His arguments were persuasive, but only time will tell whether the rhetoric would measure up to reality.

The UPA government depends on the Left for its survival. Yet it is not averse to taking decisions that offend the Communists—Manmohan Singh, Chidambaram, Montek Singh Ahluwalia and all the gung-ho reformers of 1991 vintage seem sanguine that the Reds would not risk a situation of direct confrontation with the Congress, at least, not until assembly elections are held in West Bengal and Kerala. They believe that even if the Left parties fret and fume once in a while, the fear of the BJP/NDA returning to power is too strong a cementing force and that the Commies would always stop shy of destabilising the government.

Thus, Chidambaram cocked a snook at them by hiking the limits on foreign direct investment in three sectors: from 49 per cent to 74 per cent in telecom, from 40 per cent to 49 per cent in civil aviation and from 26 per cent to 49 per cent in insurance. What did the FM have to say when he was asked to react to the opposition of the Left to his proposed increase in fdi caps? He beamed a smile and remarked that if his friends in the Left—who he considers his "conscience-keepers"—disagree with what is contained in one paragraph out of 155 paras in his budget speech, he would not be unduly perturbed.

When Sinha claimed that Chidambaram's budget was full of platitudes about improving the delivery of healthcare and primary education facilities and argued that he was living in a fool's paradise if he thought he would be able to achieve the laudable goals contained in the National Common Minimum Programme after allotting a meagre Rs 10,000 crore of additional funds, the FM retorted aggressively. He interpreted Sinha's statements to mean that the BJP had belatedly acknowledged the importance of the goals of the NCMP, to which Sinha immediately protested.

More to the point, Chidambaram said the economy had a certain capacity to absorb funds (over, say, a seven-month period) beyond which the money would end up unutilised. Importantly, the government could always allocate more funds through supplementary demand for grants. The FM categorically stated that funds would never be a constraint in implementing the objectives of the NCMP. Let's take him for his word, for the time being. The problem, as is conceded by all and sundry, has more to with the way in which funds are spent on social sector programmes and less to do with the quantum of money earmarked in a budget.

One of the most talked about proposals in the budget is the "good news" about exempting all individuals with an assessable income of up to Rs 1 lakh per annum from payment of personal income tax. The point to note in this context is that less than three per cent of this great nation of more than a billion people actually pay income tax: 34 million file income tax returns but 27 million actually pay income tax and of this number, more than half or 14 million have been benefited by Chidambaram's magnanimity. The BJP is upset that those earning, say, Rs 1,00,001 will have to pay the hitherto-required tax plus two per cent more (because of the imposition of the education and health cess on all taxes) while those with a taxable income of Rs 99,999 won't have to pay a paisa. This criticism is neither here not there. There has to be a cut-off point.

But the more substantive point that the opposition is not talking about is that Chidambaram has not initiated any specific step to widen the tax net. He is still basking in his past glory when he cut income tax rates in 1996-97, which resulted in the number of IT assessees rising significantly. He is hoping the story will be repeated all over again. One wishes him good luck but history has a strange way of not always repeating itself. The chances of the tax net widening without the government cracking the whip on evaders while roping in rich farmers seem somewhat remote. But, as the FM has promised, he will "revisit" the topic after compliance improves. Incidentally, Chidambaram has assumed that personal income tax collections will jump by over a quarter between the revised estimates for 2003-04 and the current year's budget estimates.

Even more ambitious is the expectation that total collections of income tax from corporates will rise by a whopping 40 per cent from the 2003-04 revised estimates to this fiscal's budgetary estimates. The FM expects to garner an additional amount of over Rs 25,000 crore through higher collections of corporation tax on account of the 2 per cent cess, through the tax on stockmarket transactions (that has annoyed brokers), not to mention the expected growth in the manufacturing sector. Then comes the 70 per cent rise in projected collections of service tax. Chidambaram believes he is not being over-optimistic in projecting an impressive leap of nearly Rs 42,000 crore in direct tax collections, but many would disagree. The jury is out till the next budget.

The FM is of the view that the Rs 11,000-crore rise in proposed capital expenditure on the defence services is a one-time rise to meet past obligations. He says barring the year that followed Kargil, the rise in capital expenditure on defence has been tardy. Manmohan Singh describes the rise as an "investment in national security". The government may be committed to purchasing the Admiral Gorshkov and Sukhoi aircraft, but the fact is that it is spending more under this single head than on more "laudable" NCMP goals such as universalising elementary education or providing guaranteed employment to at least one able-bodied member of each family for 100 days in a year.

Chidambaram's biggest challenge will undoubtedly be to sustain the economy's growth rate. Never has the country's gross domestic product grown by 8 per cent or more for two successive years. During 2003-04, the real GDP growth rate was 8.2 per cent. But around 4 per cent of this impressive increase came about in farm output, where the previous year had seen a sharp 5.2 per cent fall.

To expect agricultural production to rise by over 9 per cent this year, as it did in the last, would be unrealistic, despite every indication of a normal monsoon. In other words, the 12 per cent nominal rate of growth of GDP implicitly assumed in the 2004-05 budget may be met by inflation rising to 6 per cent and not by inflation-adjusted real GDP growth somewhere between 7 per cent and 8 per cent. That inflation—as measured by the official wholesale price index—could rise to 6 per cent or more this year is not an alarmist prognostication. The reason is simple. The government has no control over world oil prices and the country has to import close to three-fourth of its requirements of crude oil and petroleum products. The weak dollar could help.But only up to a point, since Iraq's crude output seems unlikely to rise rapidly in the coming months.

As all but the most ardent believer in free markets know, growth in itself is meaningless unless accompanied by equity and distributive justice. Even Jaswant Singh used the phrase "growth with equity" in his interim budget presented in February. Clearly, the arguably most right-wing government in India (namely, the NDA) too had realised the importance of direct off-market intervention in healthcare, education, poverty alleviation and job creation if India was to achieve the Millennium Development Goal of halving the number of people living below the poverty line by 2015, leave alone become a "developed" nation five years later.

The BJP came to this realisation a bit late in the day. Otherwise, it may not have suffered the kind of electoral defeat it did. The Congress—and Manmohan Singh—too woke up to the impact of its policies of "reforms without a human face" only after the party suffered after the 1996 elections. Harvard-educated lawyer Chidambaram (who counts Enron and Mardia Chemicals of the high NPA infamy among his clients) used to be a gung-ho liberaliser. He today concedes that a "dream budget" for corporates should not become a "nightmare" for commoners. Yes, without growth, the incidence of poverty cannot be reduced. But growth does not always "trickle down" the way the late Ronald Reagan had presumed. Not without state intervention. Chidambaram seems to have learnt his lessons in the last seven years. With a little help from his conscience-keepers.

(The writer is Director, School of Convergence, and is co-author of A Time of Coalitions: Divided We Stand. He can be contacted at paranjoy@yahoo.com)

At The Halfway Mark