The Net helps mobilise opinion fast. But is it just your type, just the already converted? 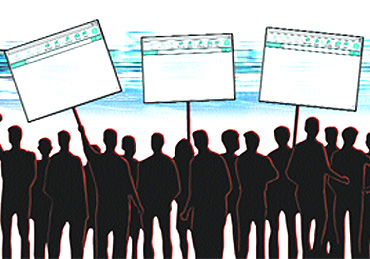 Revolution has a new address—cyberspace. The past few months have seen a spate of online crusades and campaigns which have proved effective tools of mass protest and debate, quickly mobilising people from all corners of the country. It's all a very far cry from the pre-Internet era, when you had to take to the streets, sweaty and footsore, to make your collective voice heard, or tramp door-to-door distributing pamphlets to garner support for your cause. Now, all it takes is a click of the keyboard, from the comfort of your desk. But can there be any gain without pain? Even as cyber crusaders exult over the growing—and instant—effect of their strategies, others are beginning to question whether it has any lasting impact.

Social networking sites, once the preserve of lonely hearts, networkers and job-hunters, are now flexing their muscles in aid of larger causes, from introducing sex education in schools to freeing Dr Binayak Sen. In recent weeks, the Consortium of Pub-Going, Loose and Forward Women, a Facebook group launched to protest the Sri Rama Sene's moral policing in Mangalore, has already managed to get together a 40,000 member-list and is growing. The Pink Chaddi campaign, another response to the Rama Sene, swiftly grew from a quiet online ripple into a wave. Another online group, created by Chennai-based N. Roshni and Mahesh Vee, inspired about 4,000 people from across the country to bombard Sene leader Pramod Muthalik with lovey-dovey cards this Valentine's Day.

These campaigns were preceded by a burst of online activism in the wake of the Bombay terror attacks in November 2008 with some groups mobilising people to join in peace marches, and others creating forums for people to share their anxieties and come up with constructive suggestions. Mumbai-based activist Kamayani Bali Mahabal, for example, created a Facebook group which invited members to form human chains for peace. The response was instant, and overwhelming: "People from Champaran to Chandigarh, Pune to Chennai, from every corner of the country, participated," she says.

But one fact internet crusaders omit to mention is that campaigns like these owe a great deal of their success to other, older media—Internet penetration in India is limited to 5-8 per cent of the population, and it is the extensive coverage that newspapers and TV channels give these Net initiatives that has vastly multiplied their visibility and audience outreach.

Diplomat Pavan K. Varma, who put his observations on emerging social mores into the book, The Great Indian Middle Class, notes that one thing online activism has achieved is to make the Indian middle class more aware of—and more responsive to—issues beyond their immediate concern. "A few years back, sms campaigns, as in the Jessica Lall murder case, had the same impact," he says. But, he adds, the buzz generated by successful internet campaigns tends to be short-lived. "Interest levels seem to crash as quickly as they peak. These campaigns are not structured to maintain sustained interest. They lack the organisational skill to follow up issues thoroughly, and express lasting concern," says Varma.

Such criticism doesn't dampen the enthusiasm of Bangalore-based filmmaker Ranjan Kamath, who believes that e-satyagraha has a great future. In January 2009, he floated an online petition to protest against India Inc's support of Narendra Modi as a prime ministerial candidate. The petition, which urged people to switch off their cellphones on January 30, the 61st anniversary of Mahatma Gandhi's death, notched up about 5,000 signatures across the country. But how many people actually switched off their phones? Brushing aside the question, Kamath asserts: "E-satyagraha is a powerful tool of political protest. It can mobilise mass movements if used effectively." He has a supporter in Ahmedabad-based sociologist Shiv Visvanathan. "Internet activism has immense possibilities," says Visvanathan. "It can explode into powerful mass movements. It's just a matter of time before someone with the vision to harness its full potential aligns it strategically with an agitation about a big dam or a human rights issue."

So if a Mahatma Gandhi or a Nehru had been around in the internet era, how would they have used cyberspace to mobilise the masses? Historian Ramachandra Guha laughs as he dismisses the question. "I won't speculate about that," he says, "but I think internet activism has not moved beyond the level of a symbolic gesture."

Media commentator Santosh Desai too strikes a cautionary note, observing that internet activism is not quite as democratising or unifying a force as its enthusiasts claim: "Online groups tend to show you a reflection of yourself," warns Desai. "Liberals will stick to communities that express their views. Right-wingers huddle around groups that uphold their ideology. Technology makes it easier for you to listen only to voices of your own kind and shut out differing points of view."

Exclusivity is not limited to perspectives. It is also reflected in the issues that internet campaigns choose to highlight. While an attack on pub-goers in a city triggers frenetic online activity, a rape or an ugly outburst of caste violence in a rural area is usually neglected. As CPI(M) leader and Rajya Sabha MP Brinda Karat, a veteran of street rallies, points out, "The number of people with internet access in India is limited. These campaigns reflect the concerns of a strata of society that has access to technology. They can never be a quick-fix substitute for real-life action."

Critics who believe cyberspace activism is doomed by the faceless nature of the medium would agree with Karat—real mass movements are moulded in the heat and dust of the real world, with blood and sweat and fiery oratory. Ex- defence minister George Fernandes, a master of political agitation, scoffs at those desktop revolutionaries: "We used to bark when we saw something wrong and even bite if necessary. Nowadays, the dogs only whine."