Home  »  Magazine  »  International  » elections in nepal »  The Revolution And Us

The Revolution And Us

India now looks to be 'comfortable' working with the Maoists 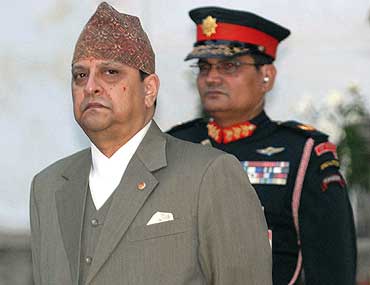 outlookindia.com
-0001-11-30T00:00:00+0553
Nepal's red embrace is firm and the emanating challenges for India tough. Recovering from the surprise victory of the Maoists, Indian officials, who had calculated on the Maoists coming third, quickly changed gears and hailed the verdict as the "mainstreaming of the Maoists" and a step in the direction of democracy. The election results were a shock not only for India but also to Nepal's Maoists themselves, who had delayed the vote and insisted on proportional representation because they were shaky about their support. But they have won handsomely, banishing the 240-year-old monarchy to near-oblivion and showing that the "terrorist" label can be irrelevant to young voters looking for real change. Unconfirmed reports say King Gyanendra has asked for asylum, activating his palace and priestly links in India and working on the Hindu sentiment.

"It will be a different kind of Nepal. India will have to adjust and the sooner it adjusts, the better for the future," said a senior official. "India is best placed to do so because very few countries have that advantage." There is no need to panic because the Maoists themselves acknowledge India's role in bringing them into the mainstream. "We have built relations and engaged with them at different points of time, nudging them towards participation in the elections," he added. India's ambassador to Nepal, Shiv Shankar Mukherjee, echoed the sentiment from Kathmandu. "We have always maintained that we support and respect the voice of the people of Nepal...who have spoken in a reasonably free and fair election. We are comfortable working with a Maoist-led government."

So far the statements from Prachanda and others of his ilk have been sober and statesman-like, keeping a balanced approach between India and China. He recognises that developments in Nepal are tied to India and the two share a special relationship. Mukherjee got a call from Prachanda's office soon after the victory trend became clear, asking for a meeting. In the half-hour meeting, the Indian ambassador assured him of all support. Sources say the Maoists appreciate that India stuck with the democratic process and helped with material and money.

The most important task for India's foreign office is to help shape events in Nepal so that New Delhi's vital interests are secure and the open border does not become a security threat. So far the

Nepal government has been "responsive" to Indian concerns about Pakistan using the Indo-Nepal border to send across troublemakers. China too is entrenched in the area. But in the end it is India's responsibility to "sanitise" the border, keep up surveillance, monitor the traffic and build the infrastructure on its side. "You need cooperation from Nepal but you also need to do your own job more vigorously," a well-informed official said.

As for the Maoist demand to revisit the 1950 Friendship Treaty to make it more "equal", India says, "Most welcome." So far the treaty has worked to Nepal's advantage because India has not insisted on reciprocity, be it work permits for Indian teachers or the right to buy property in Nepal. The Nepalese people don't need work permits and have gone on a home buying spree, creating an entire colony in Gurgaon near Delhi via benami transactions. Nepalese officials themselves gave up the idea of changing the treaty after only one round of talks, sources say. "We revised the Indo-Bhutan treaty without any fuss and we have no difficulties doing the same with Nepal," an official said.

Another area of concern is how far the Maoists will go in changing Nepal's economic policies. Indian business leaders have heard the public statements of Maoist leader Baburam Bhattarai that the private sector need not worry about state controls but officials say the new leaders will have to prove their words with action on the ground. Time will test the new leadership but India is ready to help.