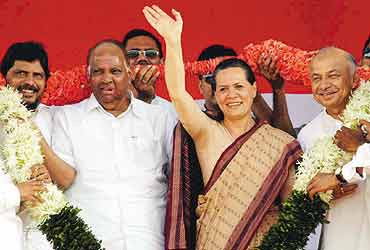 outlookindia.com
-0001-11-30T00:00:00+0553
In sugar-rich western Maharashtra, Congress citadel as well as pocketborough of the Nationalist Congress Party, there is a sense of deja vu. It was after the 1995 assembly elections, when Sharad Pawar as Congress chief minister led the battle and lost, that the region saw the rise of the rebel. Deep factionalism in the party and some strategy calls by the CM resulted in 40-odd rebels winning and cashing in on their new-found importance. Some of them backed the Shiv Sena-BJP alliance and the Congress lost power. So did Pawar. Had they not been rebels, many of them would still have won their seats as Congress candidates and Sena chief Bal Thackeray's dream of unfurling the bhagwa dhwaj (saffron flag) atop Mantralaya would have remained just that, a dream.

Thackeray, now 79 and ailing, is looking to his Sainiks to fulfil the dream a second time round. This time too there are rebels in the fray, greater in number and more powerful than in 1995. When elected, they could help either of the two alliances cover the last mile to Mantralaya later this month. The rebel culture is in full swing this election. In fact, rebel management is a critical component of poll strategy for all parties. Post-election planning, well, it now largely means wooing and winning over rebels at any price. In western Maharashtra, a hotbed of rebellion this time too, the popular refrain is that Pawar, father of the rebel culture, is getting his just desserts.

In a complex, confusing and candidate-centred scenario, rebellion is the dominant theme. Also the plethora of super-rich candidates—the Maharashtra Election Watch (MEW) survey showed 200 crorepati candidates in the fray—are challenged by equally powerful rebels. Most rebels are contesting to retain their hold on personal fiefdoms. Rebellion has partly to do with the fewer number of seats that the Congress and NCP are contesting and partly with the very complex and troubled equation between the two. The Sonia Gandhi-Sharad Pawar thaw is yet to trickle down to the karyakartas. Still, the two Congress parties are fighting as one; it reduces the political space that was available in 1999. "The biggest rebellion was in 1999," says Prataprao Bhosale, "And who but Sharad Pawar was responsible for it." So too now.

Take Wai for instance. Tucked away in Satara district, it tells the story of rebels in a microcosm. In the seat-sharing arrangement between the Congress and NCP, Wai came the latter's way. The NCP fielded Makarand Patil. Angry and hurt, Madan Bhosale of the Congress filed his nomination as an independent. But he is no ordinary rebel. His father, Prataprao Bhosale, is a veteran Congressman, ex-minister and former PCC chief. Bhosale Sr is unrepentant. He even believes his son took the correct decision and has thrown himself wholeheartedly into election management. "We will show our worth to both the Congress and NCP," thunders Madan. The day the son filed his nomination, Papa Bhosale quit the Congress.

In an election dotted with more rebels than official candidates, where many contests have become four-cornered or multi-cornered, where personal appeal and networking of the main candidates carries greater currency than any development issue, it's difficult to determine an underlying factor that binds the 288 constituencies. When ballots are cast on October 13, there will be 288 mini-elections rather than one state assembly election. Anti-incumbency and non-performance of the Congress-NCP government could have been the central issue but the Sena-BJP tempered it with emotive controversies such as the Savarkar plaque issue and tiranga yatra. 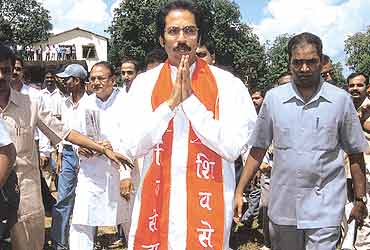 "There is no overarching issue this election. This has allowed local issues and alignments to play a larger role than they usually do," feels PCC vice-president Anant Gadgil. The BJP is strenuously keeping its campaign low-key while the infighting in the Sena between Uddhav and Raj has added some typical Bambaiyya masala to electioneering. The ailing Balasaheb's hands-off attitude hasn't helped. Sena rebels are aplenty in the fray. Mayawati's BSP may affect a handful of seats in Vidarbha while the Peasants and Workers Party will turn the tide in a few Konkan seats.

Delayed but timely rain helped the government limit the immediate fallout of the severe drought in Vidarbha and Marathwada, robbing the Opposition of another substantive issue. In any case, Sonia Gandhi and Sharad Pawar, in their public meetings, have been laying the blame for bad rural economy and farmers' suicides on the erstwhile Vajpayee government. "That's why you need to elect us back to power," Pawar says at every rally, "You will see development when the same party is in power in Mumbai and Delhi." The Congress-NCP is not asking for votes on the basis of its report card; the alliance is seeking mandate on promises. Free power to farmers, subsidies and waivers, minimum support price, development in urban areas, turning Mumbai into a city better than Shanghai and so on. And, for good measure, constructing a Savarkar memorial in the Arabian Sea.

In fact, senior Congressmen are now dreading the post-election scenario. They believe rebels have been carefully propped up so that, when elected, they owe their allegiance to Pawar. This, in turn, will swell NCP numbers ahead of the Congress and may allow the NCP to lay claim for the CM's post. Pawar dismisses this: "Our alliance will come to power and it will be a Congress CM."

The pre-election rebellion is a teaser, some say, the biggest rebellion is yet to come and it will be in the Shiv Sena. The pro-Raj Thackeray faction is seething within, waiting for an opportunity to strike and claim political ground from Uddhav and his coterie. If the Sena loses a handful of seats in Konkan and Mumbai, and therefore the state, it will allow Raj to reclaim lost space.

This election will see a close finish and rebel independents will prop up the next government in Maharashtra. Rebellion as a leitmotif has come to stay in state politics. It evidently pays to rebel.