Kerala's Marxists can't stymie debate anymore, it will hurt them 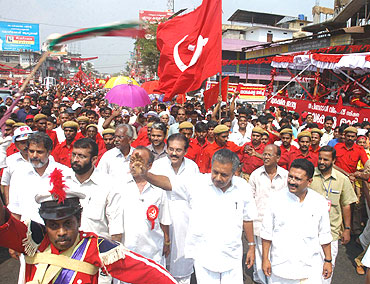 outlookindia.com
-0001-11-30T00:00:00+0553
The Communist Party of India (Marxist) is undergoing a profound transformation that confers on it the new character of a right-wing capitalist party drawing support from extreme, fundamentalist communal groups in the power struggle. The men at the top have already switched over to the bourgeois lifestyle with posh cars, palatial resorts, residences and offices. With their government in office, they have been corrupting the administrative machinery to suit their own selfish ends, using the police to suppress political opponents and even challenging the due process of justice. Now the question is: how far will the party’s traditional followers—the working class, peasantry and middle classes—appreciate this change? Will they take it as proof of their success and cheer the leadership as before? Or will they interpret it as a betrayal of the sacred trust bequeathed to them by history? They have all along been conditioned to follow the leaders like dumb cattle. However, the impact of modern democratic processes riddled with television, newspapers, banking, courts and elections can be unpredictable.

The answer to the question will be spelt out fully after the coming polls, but we are justified in speculating on the basis of historical experience within Kerala and outside. CPI(M) leaders are banking on the fact that so far, in every crisis, the rebels have been thrown out, made to lick the dust, and the party has come out with increased vigour. In the present case, though, two other factors have to be taken into account.

Earlier, every crisis tended to be greater than the previous one. Now, it is the policy changes that are more spectacular. Debate within the party has been crudely suppressed as usual; but name-calling and slang wars have been unleashed, revolts are celebrated publicly and parallel party formations have come to the front stage. Meanwhile, erstwhile Left allies in government, like the CPI and Janata Dal, are waiting for a chance to settle accounts through the elections. The criminal associations of the new allies are forbidding, and new evidence of the same is highlighted everyday.

The second factor is that the world and national situation have also changed radically. Details of the collapse of the Soviet Union, the victory of the open market in China, the peasant revolt of Nandigram etc have slowly percolated into literate Kerala society and reached the bottom in spite of the propaganda barricades. The Communists had managed to keep the party strongholds away from development, but now TV has invaded party villages. A Gulf boom has swept the country with the message of consumerism and capitalism, and information technology has its booths in all villages.

Communist leaders of the first generation who could claim the prestige and practical experience of the freedom struggle have disappeared from the scene. There are only rare survivals like the present CM, but his position is a contributing factor to the party’s decline. The new bookish leaders at the party centre have no background of popular agitations or victimisation by the police. Therefore, they have no direct access to the hearts of the people. Their intellectual claims are also not a subject of discussion at any stage. While the national Marxist Communist leadership is paralysed, regional leaders have nothing to offer except threats and statements. Shady characters from the underworld are emerging as the saviours of the party! They are the abkaris (liquor barons), the real estate agents, the resort owners etc. This is likely to frighten the working class followers who formed the major support of the party in the countryside.

There is no strong wave in favour of any party leader, old or young, today. The enumeration of the achievements of the Marxist-led government is not countered by the Opposition, but by the faction leaders within the party and the allies outside. The growing empowerment of women, the youth and Dalits, powered by the fast, uncontrollable development of IT, has done its part in undermining political discipline. The cadre parties are the worst sufferers in this area. The new democratic forces, including tribal groups, have reached maturity and independence. All these and the masked villain of anti-incumbency may create problems for the Left Front, preventing them from repeating their previous record. Still, to what level the receding tide will carry them backward will depend on the performance in the last week by all sides.

'It'll Be A Shock Treatment For The Left'