Surjit S. Bhalla contends income tax has has outlived its utility for revenue maximisation in developing countries like India 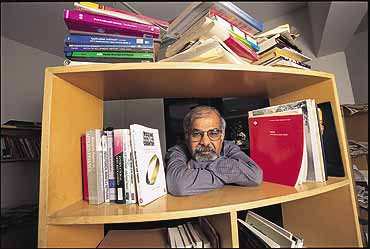 outlookindia.com
-0001-11-30T00:00:00+0553
Econometrician Surjit S. Bhalla happily courts controversies to debunk economic myths perpetuated by the establishment and government-friendly institutions. Here he contends that income tax has outlived its utility for revenue maximisation in developing countries like India and the only way out is to have a VAT combined with a consumption tax. Excerpts from an interview:

What about a scenario where there is no income tax...
That’s not a bad idea. Why do we have taxation? Partly to provide public goods like unpolluted air, good roads etc and partly for the greater good of redistribution. Since we don’t have enough money for it, we try to maximise revenues, especially through income tax. I think a better idea is to have the government rationalise its expenditure. Income tax especially is a highly inefficient way to maximise revenue because it’s coercive; it basically squeezes the salaried people, and encourages evasion of all kinds possible. But income tax continues because the really rich, who get away with low declared income levels and high consumption, do not want a consumption tax and it is they who take the decisions.

Is evasion only a function of high tax burden?
Large sections of the population get away by not paying the tax. The self-employed, for instance. According to my figures, they are 40 per cent of the workforce in urban India (50 per cent in rural areas). Some 54 per cent of the rest are salaried people. Considering that less than 30 million people pay income tax, it’s easy to guess who evades and how much is evaded. It’s a huge sum. We don’t have the means to make everybody pay. Black money in the economy arises out of these distortions and always out of tax evasion.

Is there really an alternative?
While it is really not possible to make everybody pay, the idea should be to minimise the leakage. Almost half the world has adopted value-added tax. It is almost a perfect tax system; there is just no argument against it. It will definitely minimise evasion. Some goods used by the poor people, like salt and raw foods, are exempted. Team it with a consumption tax, and you have enough arsenal to replace the regressive income tax system. In fact, you’ll have enough revenues left over to subsidise our politicians, who have dedicated their lives to poverty eradication (and buying farmhouses)!