Deep Singh, Sikh superhero, takes on the Taliban and ignoramuses 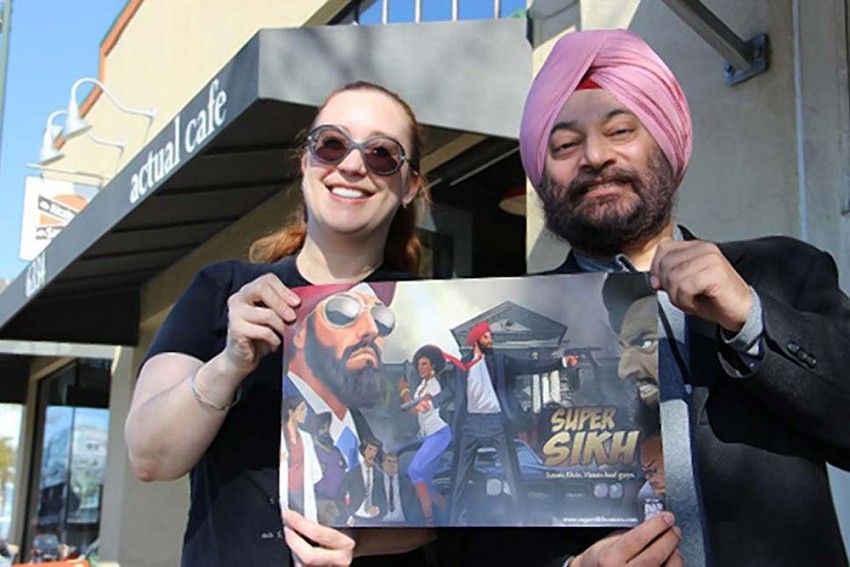 First, a word of thanks: the newest superhero on the block doesn’t wear tights or his underpants on the outside. Super Sikh Deep Singh is cool in his aviator glasses and hipster clothes—a trim black jacket over narrow pants nicely hiding the ‘kachcha’, which we assume he wears as a practitioner of the faith. His ‘pag’ is just so, the beard not unruly but ‘fixed’ with Simco. Style is a message here.

Second, the surprise. Deep Singh doesn’t possess supernatural powers to weave nets between Manhattan buildings or a souped-up motor to vroom in and out of trouble spots. He uses his training, education and intuition to figure out stuff. No mutating genes or drinking charged up liquids as a child.

Mr Singh is grounded in reality and the universal values of his faith. He loves music—Elvis is an abiding pass­ion alth­ough we hope he’ll embrace Indie rock in time. He’s part of an elite mul­ti­n­atio­nal force—UN-approved and Int­e­­­r­­pol ble­ssed, mind you—trained to interv­ene in crises around the world. He’s been living in India with his aunt and uncle after his doctor par­­ents died while on a hum­­anitarian miss­ion in Afr­­ica. His day job (his cover really) is being a techie.

So what does Deep Singh really do? He fights evil. Duh. The first adventure pitches him against a Taliban commander called Salar al Amok. Get the picture? The comics are set in today’s world with a hero fighting today’s villains, making them instantly relevant at many levels, apart from fulfilling the most basic need of fighting stereotypes about Sikhs and Sikhism, particularly in the United Sta­tes. The first story has Deep Singh tra­v­elling to Graceland, Presley’s home, but he’s followed by an al Amok who bombs girls’ schools in his spare time.

“Singh is part of a force that transc­e­nds boundaries to go out and fight evil. Imagine ‘heroes without borders’,” says Supreet Singh Manchanda, a California-based financial executive and co-creator of the comic book. He felt it was time to put his childhood dream on the drawing board and make Singh the king of comics. What’s multiculturalism without a brown hero who doesn’t come from Gotham or a planet beyond?

Manchanda, a Sikh whose family traces its roots back 17 generations in India, recalls a saying that "with my turban I was born to stand out not hide in a crowd so my actions have to be righteous and noble" and that is true of Deep Singh. Manchanda teamed up with Eileen Alden,a comic book writer, who learnt Gurmukhi while researching the hero’s religion and embraced Sikhism herself. Manchanda and Alden then launched a campaign to raise $5000 through Kickstarter, a global crowdsourcing platform for creative projects. They reached their goal in 27 hours. By last month, they had collected $22,000 on the website. At least four issues of Deep Singh’s daredevilry are ensured.

“Singh’s part of a force that transcends boundaries to go fight evil. Imagine ‘heroes without borders’.”

Amit Tayal, a Faridabad-born award-winning illustrator brings the hero to life, adjusting the tilt of his pagri and the skinniness of his tie. Tayal has drawn everything from cute Disney characters to ferocious monsters to Steve Jobs. “Gro­wing up with Sikh friends, I know them as benevolent and protective. Yet today, they are looked at with suspicion in public places like airports in the west,” says Tayal. “I wanted to do something about this. I wanted to participate in educating people about it.” A global offering is planned after the initial four issues of paper comics to be followed by digital ones in Punjabi, Hindi, French, Man­darin and Portuguese.

Once ready, Deep Singh’s most important goal is to take “the turban back from the terrorists”, Manchanda says emphatically. “They can no longer hijack our identity. We are reclaiming it. It is an important first step to show a good guy in a turban fighting a bad guy in a turban and force the audience to look at the character’s actions rather than his or her get-up to better define whether it’s the good guy or the bad guy,” he explains.

For too long in the US, the Sikh turban has been mistaken for Osama bin Laden’s headgear despite being remarkably diff­erent in appearance. It has resulted in violent hate crimes, arson and racial profiling. Navigating the post-9/11 Amer­ican landscape has been difficult for the Sikhs as they delicately try to educate fellow Americans that they have no con­nect­ion with the terrorists. The ‘pagri’ is clothing for one of the five essential Ks, and was around way before bin Laden set up house in Pakistan.

But try as one might, the confusion is entrenched in the minds of racists looking for scapegoats. The Sikh Coalition, an NGO, has reported over 700 attacks against the community since 9/11, ranging from murder to bullying in schools. The biggest was the 2012 shooting spree in a Milwaukee gurudwara in which six people were killed. The most recent was in New York last September when 20 white men, yelling “get Osama” and “terrorist”, beat up Prabhjot Singh, a professor of international relations at Columbia University.

“While in India and the British Commonwealth, Sikhs have a long history of valour as soldiers, police etc, this image is very alien in the US, where we are constantly bombarded by media showing the Taliban or isis and as a result we’re mistaken as Islamic extremists,” Manchanda says. Sikhs have only recently begun fighting for better representation in the US army and police.

Clearly, Deep Singh has a lot to fix apart from the Taliban. He has to create a real space for himself in the American mind, in fact, establish permanent residency. He must quash the rampant confusion and show that Sikhism has nothing whatever to do with barbaric mutations of Islam as seen in ISIS videos. And all of it via comics. A tough task? That it is, and we’ll know soon enough whether the superhero is up to it.

By Seema Sirohi in Washington

The piece has been edited.