The Real Issue Issues Forth 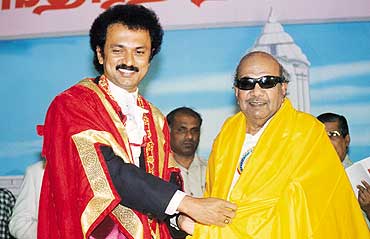 Already full of treachery and intrigue, a new factor has emerged in the Tamil Nadu elections scene: M. Karunanidhi's third son, Stalin, the uncrowned successor. He is the man the DMK cadres look up to as their next leader. And it is he who is pushing for a return to the Dravidian roots many in the party believe the DMK has forsaken after its alignment with the BJP. Stalin is against the DMK linking up with national parties like the Congress and the BJP. And it is common knowledge that it was Stalin who ensured that Vaiko's MDMK would be forced to move out of the nda patchwork in Tamil Nadu.

Though not openly stated by the DMK, the real reason for the MDMK's walkout is the Stalin factor. "Vaiko knew if he remained in the front, the nda could manage to win the next poll. This meant he'd have only been helping Stalin consolidate his stranglehold. Even the transfer of power to Stalin would be smooth, as Karunanidhi has clearly indicated that this is his last election," says an MDMK leader, who is also confident that no amount of persuasion by George Fernandes, L.K. Advani and A.B. Vajpayee will make Vaiko be part of the DMK-led front. Adds he: "It's been Vaiko's dream for nearly 20 years to succeed Karunanidhi. How can you expect him to support an idea which will kill his dream?"

Stalin is only the mayor of Chennai but his detractors have now discovered in his name a larger meaning. MDMK leader Vaiko had made public his displeasure with Karunanidhi's son in 1993. "M.K. Stalin is no different from Joseph Stalin. Both are ruthless dictators, they treat dissenters with an iron hand; both revel in nepotism and try to rewrite history to suit their pursuit of power." But for the average DMK worker displeased by the sellout to the communal forces they fought all their lives, Stalin is a hero and a matured politician. Says transport minister K. Ponmudi: "He believes in improving infrastructure; he is for privatisation of areas where the state machinery has failed to deliver; he is for wider political alliances. His tenure as the mayor of Chennai has given him a statewide acceptance as a good administrator."

Stalin's rise has altered the equations among the nda's alliance partners. Immediately after the Tehelka tapes episode, Stalin was at the forefront of the campaign to cut the number of seats to be given to the BJP in the state from 23 to 21. He was instrumental in roping caste-based outfits into the front. "The 1999 elections are a pointer to understand the consolidation of the Dalit vote," observed Stalin. "But for the Pudiya Tamizhagam led by Krishnaswamy and the Dalit Panthers led by Thirumavalavan, the tmc-led Third Front would not have secured 8 per cent of the popular vote. With the AIADMK emerging as the Thevar party, courtesy Jayalalitha, there is a growing disenchantment in other communities that they're not politically respected. My choice of Makkal Tamil Desam, a party led by former AIADMK minister S. Kannappan and largely seen as the Yadav outfit, is to bring them into the DMK fold." According to him, no pollster can predict the level of consolidation due to the presence of these parties as the pollsters use the past behavioural pattern to device their questionnaires while the ground reality is constantly shifting and new patterns are emerging.

And this is precisely where the problem lies. In order to accommodate the newcomers, the party is forced to sacrifice some of its key seats.One victim of these new plans was a minister in the present DMK cabinet, Tamizhkudimagan, who has shifted allegiance to the AIADMK.He had won from Illyankudi twice—in 1989 and in 1996. But this seat was given to Kannappan. "Why should Stalin decide who should contest where? He is only promoting casteist outfits. The rising son is actually working for the sunset of the DMK," complains this new convert to the AIADMK.

To accommodate Stalin, the DMK leadership has even stopped denying the charge of dynastic rule. Says party treasurer and health minister Arcot Veeraswamy: "In a democracy, one is not bothered about one's birth. The only factor that determines acceptability is the choice of the people."

It was after the electoral defeat in the 1980 general elections that the DMK started focusing on the youth. At a party convention in Madurai, the youth wing was accorded special status and made to function under the direct supervision of the party's general secretary, Anbazhagan. Stalin's brief was to infuse young blood into the party and he did this with such zeal that his detractors dubbed him a brat, a tag he has not quite managed to shake off.

Stalin really came into his own in 1996 when, in the first local bodies election to the Chennai corporation after 25 years, he defeated the combined opposition's candidate, V.S. Chandralekha, by a margin of over four lakh votes to become mayor. According to a senior DMK leader, the biggest challenge to Stalin is the constant comparison to his father. "Instead of comparing him with Kalaignar (Karunanidhi), weigh his credentials vis-a-vis other leaders. He is second to none in Tamil Nadu," he observes.

But for all practical purposes, Stalin is already carrying the burden of winning this elections. If the DMK loses this time, the blame will be laid squarely at his door. His unorthodox approach of roping in caste parties at the cost of recognised political parties has put him in a precarious situation. The AIADMK has already made it clear that if it returns to power, Stalin will the first person to be fixed. MDMK leader L. Ganesan made a pithy comment: "We have to see whether he goes to George Kottai (Fort St George, the seat of the government) or to Palayam Kottai (the central jail)." Stalin's destination will be known in the third week of May.