Alas, administrative reform, delivery of benefits get the go-by again 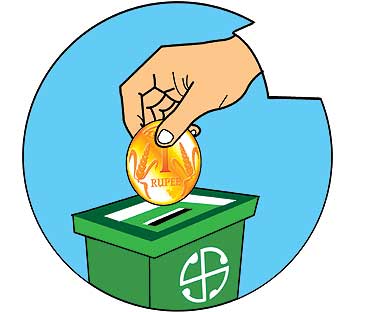 This is an election-eve budget without an election. It has copied schemes that the government thinks helped win seats in the recent general elections. It ignores the urgent issues of administrative reform and decentralisation of power to improve accountability, delivery and fiscal responsibility. In 2008-09, the three economic stimulus packages cost Rs 1,86,000 crore, or 3.5 per cent of the gdp. The 2009-10 budget seeks to provide stimulus through a substantial increase in spending for the aam aadmi via schemes like nregs despite ample evidence that present spending on these schemes is inefficient in reaching beneficiaries. "Leakages" are more than what reaches the beneficiaries. Increased spending on such schemes should have waited for the strengthening of the institutional framework, especially at the village level.

It's known that venal members of the administration rip off every social scheme. There are many reports on administrative reforms, but even this prime minister, a bureaucrat for many years, has not implemented them. Indeed, no government has tried to do so. Many prefer the status quo.

The budget also boosts expenditures on agriculture, infrastructure, rural housing etc. In the past, most such budgeted expenditures were not achieved. This has delayed or prevented additions to physical assets that would have led to faster growth. Roads, houses, and so on, built well and on time, will improve rural productive capacity and stimulate the economy. For example, if the highways/roads programme is not to be the failure it was during the upa government's earlier tenure, the nhai needs reforms to become independent of the minister and accountable for its output. Other infrastructure expenditures need similar reforms.

The finance minister gleefully told Parliament that the proposed budget expenditure was over Rs 10 lakh crore. But he had no proposal to make the expenditures efficient and without waste. It will be financed mostly by market loans of around Rs 4 lakh crore. Interest payments alone will cost Rs 2.25 lakh crore. While the government will benefit if interest rates were lower, this huge borrowing programme will keep inflationary expectations alive. The Reserve Bank of India is unlikely to lower interest rates, which would have stimulated private investment. The private sector will thus suffer because government will borrow so much and stunt liquidity, and the interest rates will remain high. Without a substantial rise in private investment, the continuing decline in exports of merchandise and IT, rising crude oil prices and higher import bills, and a possible monsoon failure, we must depend on public investment for growth. It did not help growth in the Indira Gandhi years and will not do so now. The nine per cent growth target will be a dream.

The central government's fiscal deficit is pegged at 6.85 per cent, with states raising it to nearly 10.8 per cent, higher than during the "crisis" of 1991. The argument that the US and UK run large deficits is no consolation. Our deficits were really higher than reported by governments in the last few years because some subsidy expenditures and oil sector bonds given to keep retail prices artificially low were "below the line".

Not only is the deficit likely to be higher, we do not have efficiency in spending nor a system to punish thieves. This is clearly a vote-gathering budget aimed at immediate political gain and not at building a strong future. It excuses itself through the need for stimulus, but does not assume fiscal responsibility.

While the budget lacks economic vision, it has many good features, like abolition of the fringe benefit tax and delivering on a promise made long ago that the 10 per cent income-tax surcharge on companies would be abolished. Besides, it promises to study how fertiliser subsidy could be made to reach the farmer and enable a better mix of fertiliser use; enhance the urban renewal mission; simplify the tax system; provide social security for the unorganised sector; support the acquisition of skills; temporarily enhance limits on state government borrowings and so on.

Yet, this is not the budget we expected from a government newly freed from the baggage of its Left allies.

(The writer is former director-general of NCAER.)