The Raga Of Walking Away From A Fight

‘No fire in the belly’ and ‘no appetite for a political fight’—with a leader diagnosed thus, the Congress let Modi have it his way 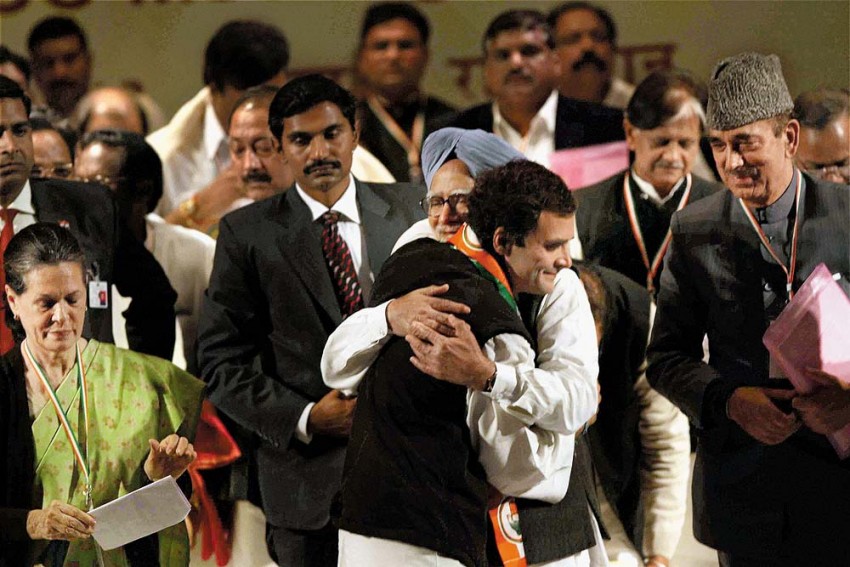 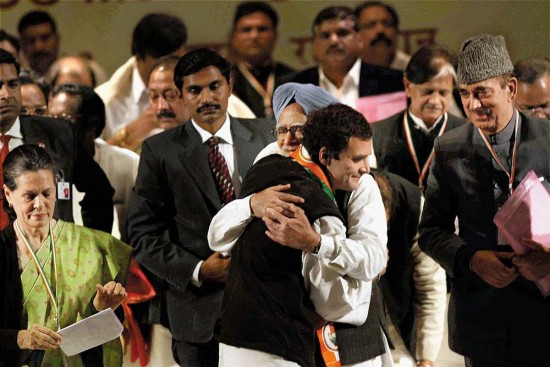 I went to meet a senior bureaucrat who is considered close to Prime Minister Manmohan Singh. Another bureaucrat was also present. One of them said, “Fear is creeping in; this man [Modi] is coming and we could not even put a new Lokpal in place; that will be an instrument of harassment; even the CBI director has joined the BJP camp.” We also discussed the case of Sanjeev Tripathi, who till a few months ago was RAW chief and had recently joined the BJP. It was recalled that till a few weeks ago he had been seeking ‘accommodation’ from the government and had even met the prime minister to that end. The two bureaucrats recalled “how K.C. Verma [Sanjeev Tripathi’s immediate predecessor] was made to resign a month before his retirement, so that Sanjeev Tripathi could be named RAW chief. If Verma had completed his full term, Sanjeev Tripathi would have been knocked out.”

Later, I met a few friends from the media over lunch. One of the journalists told us a most revealing incident: “Yesterday, my daughter’s board results came out and we took her out to dinner to a Chinese restaurant in Vasant Kunj. While we were having our food, my daughter suddenly said, ‘Mummy, doesn’t that boy at that table look like Rahul Gandhi?’ It was Rahul. He was in the company of four or five people; none of them was a politician; there was one woman in a short dress. They were just one table away and one could overhear their conversation. The talk was totally non-political, the usual inane talk of upper-class young Indians.”

This was a truly revealing and shocking tale. This had happened on the day television channels had flooded us with images of Rahul Gandhi helping his mother file her nomination papers from Rae Bareli. It occurred to me that the young man seemed to have no hunger for power and no appetite for a political fight, whereas Narendra Modi appeared to be a tiger straining at the leash, overeager to storm Raisina Hill. I could only surmise that Rahul Gandhi either did not have his heart in the fight or had already given up, and was now going through the motions of leading a campaign. The inadequacies and insularity of Rahul Gandhi have now brought the grand old party to a stage where it is almost dysfunctional. My own reading is that the indulgent mother too has realised his disinclination and is taking charge of the campaign.

The tragedy of Rahul Gandhi’s reluctance is now unfolding. Both before and after the Jaipur ‘coronation’, he has at best provided erratic and episodic leadership to the Congress. On the other hand, the Congress elite—the chief ministers, central ministers, state Congress committee chiefs and MPs—want to believe desperately that he has the goods to lead the party to electoral success; for this elite, victory during elections is the only game in town. But Team Rahul insists that he has loftier ideas and nobler ideals than merely winning elections, that he has not been bewitched by ‘power’ and that he is in ‘politics’ to fix things on a long-term basis—a very moral enterprise. His team thoughtlessly murmurs that their young leader has set his sights on making a clean sweep of things in 2019 rather than getting embroiled in a messy coalition circus, given as an inevitable denouement after the 2014 vote. This perception of looking at the future—to the battle of 2019—rather than the house-to-house fighting, raging here and now in 2014, has proved corrosive. There is an unstated fear among Congressmen that they have been left without a commander in the battle. I think Natwar Singh was correct in his assessment when he once told me that “the boy has no fire in the belly”. 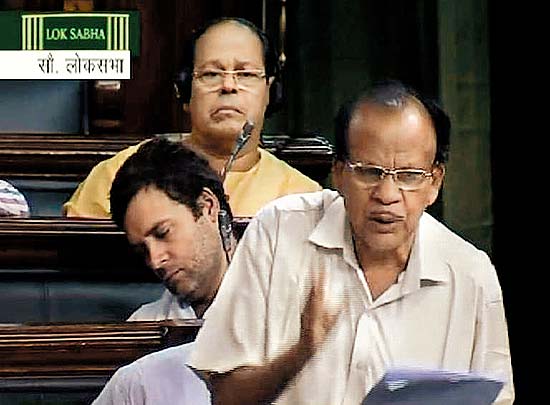 It occurs to me that the Congress’s sub-optimal use of its funds was emblematic of its larger organisational atrophy. Congressmen seem to have developed a self-serving but a decidedly unhealthy habit of expecting, pleading for and demanding funds from the ‘high command’  and then siphoning away the money to private pockets rather than spending it on winning elections in their constituencies. Undoubtedly, other political parties experience similar manifestations of dishonesty, but Congressmen appear to have made a fine art out of this diversion of funds.

Rahul’s team gave out the impression that he was focused more on the long term. It proved his undoing.

Back in Delhi, I spoke to a senior Congress strategist over the phone, and he sounded very despondent. “We are going through the motions of campaigning without any sense of strategy.” He said that other senior leaders in his party were unhappy with Rahul Gandhi and his team but were unable to express their feelings; that there is this strange restlessness in internal conversations, a sense of something going terribly amiss; yet, nobody is able to do anything about it, or even identify the problem, if there is one.

According to him, there wasn’t much of a convergence between the Congress president and the vice-president. A senior colleague had told him that “Ahmed Patel continues to run the campaign on a need-to-know basis. Whenever a problem is brought to his knowledge, his response is that ‘It is being taken care of, and it will be taken care of.’ And that is it; no one is told  of any details of how and who will sort out the problem.” This seems to have become a debilitating part of the Congress campaign, this lack of a collective focus and objective, except a negative one of preventing the BJP or Narendra Modi coming to power. Certainly, it is no collective joy.

I met one of the senior-most ministers in UPA-II today, and in response to his question about the vote in Delhi, I said: “Sir, Congress appears to have done rather badly in the vote yesterday.” He nodded in agreement when I suggested that the Muslim vote seemed to have been divided to the Congress’s disadvantage. I told him that it was obvious that the minorities had made up their mind to defeat Narendra Modi and his candidates, and they would vote for those candidates­—irrespective of the party—whom they would judge best suited to defeat the BJP. The minister nodded in agreement once more.

Encouraged, I pressed on. I said, “This perception that Rahul Gandhi was interested only in 2019 has done great harm to the Congress’s electoral prospects; the cadre is not enthused; the potential fund investor becomes ambivalent.” Again, a very slight nod of the head to indicate agreement. The minister added that “the Congress president was still finding some traction” and that “she remains the biggest vote-catcher” for the party. I detected a note of disappointment with Rahul Gandhi’s performance on the campaign trail so far in this observation.

After the Congress rout, Digvijay Singh is said to have wondered if Rahul Gandhi was serious about politics.

I also met a key bureaucrat today who pointed out how the fence-sitters were moving away from the government. “Look at Deepak Parekh,” he said, “one of the blue-eyed boys of Montek Singh Ahluwalia. He is still the chairman of the PM’s task force on infrastructure and there is a proposal pending to renew his tenure. And what is Pratap Bhanu Mehta doing rationalising Modi [with] all those big words? A batchmate from Madhya Pradesh says the Congress would be lucky to have three seats; the private secretary to the CM of Maharashtra says ‘things are pretty difficult’.” Then he gave vent to his exasperation: “Bhai, look at this Priyanka—front-page photos of her with Robert Vadra going to the polls. She too wants it easy, like her brother. [She is] neither here nor there. She is unwilling to rough it out, unlike her mother, who has European sensibilities and the self-discipline of a Catholic upbringing.”

Later, I met a former bureaucrat who retired many, many years ago but remains a die-hard admirer of Jawaharlal Nehru. He was worried about the impending Modi success and shared his keen sense of disappointment that Rahul Gandhi had failed to take off; he wanted my view as to why the young man had not prepared himself better; why could he not come into the government or even take over as prime minister? I told him that ideally Dr Manmohan Singh should have become President of India in 2012, and Rahul Gandhi should have taken over then. But there was this Nehru-Gandhi conceit that “we eat only what we hunt ourselves; the 2009 mandate was for Manmohan Singh”. I added that there was an additional conceit that “a Nehru could not—would not—work under someone else”.

I heard of a conversation between two Congress leaders close to the establishment. Both had concluded that a comprehensive defeat was staring the party in the face. The younger of the two had argued that “Rahul Gandhi must take responsibility and resign”. The older, wiser and shrewder of the two, simply asked: “Who is the alternative?” The senior leader appeared to have perfected the script in his mind, and “ten years of anti-incumbency” would be trotted out as the reason for the defeat.

However, the question that no senior Congress strategist is able to answer is: why has anti-incumbency not hurt the BJP in Gujarat, Madhya Pradesh and Chhattisgarh, or even Naveen Patnaik in Orissa? The next logical question that arises is: why has the ‘high command’ not been able to inspire, discipline and cohere a team in the states? Every Congress leader or chief minister has been subjected to needless internal sabotage. There was a time when factionalism (and conflict of ideas) used to be a positive asset in the party, when the high command could be a honest broker. Those days are long gone, and yet Congressmen continue to take great comfort in the wisdom that “only a Congressman can defeat another Congressman”.

The talk among serious Congressmen these days seems to be whether someone could stage a “14 March” after the election results, in a reference to the unseating of then Congress president Sitaram Kesri [on 14 March 1998] by Sonia Gandhi’s camp on the plea that the party had failed to capture power under his leadership [in the 1998 Lok Sabha elections]. Those close to the Sonia Gandhi household are inclined to think that “Rahul Gandhi has shown promise in the last two or three weeks”.

I met a UPA-II cabinet minister for the last time in his office. He said: “I am coming from Digvijay Singh. He says: ‘The faint-hearted can leave; the tough ones will remain. The question is: is Mr Rahul Gandhi serious about politics? If he is, then there is one set of questions, and if he is not, then there is another set of questions.’” Digvijay Singh has managed, I think, to say what is on the mind of most Congress leaders. The minister added that he had run into A.K. Antony and had asked him what happened. Antony had replied: “New India.”