The novice Rahul Gandhi of old is gone. His probable allies may be less than enthusiastic, but a presidential air is building up around the 2019 contest. 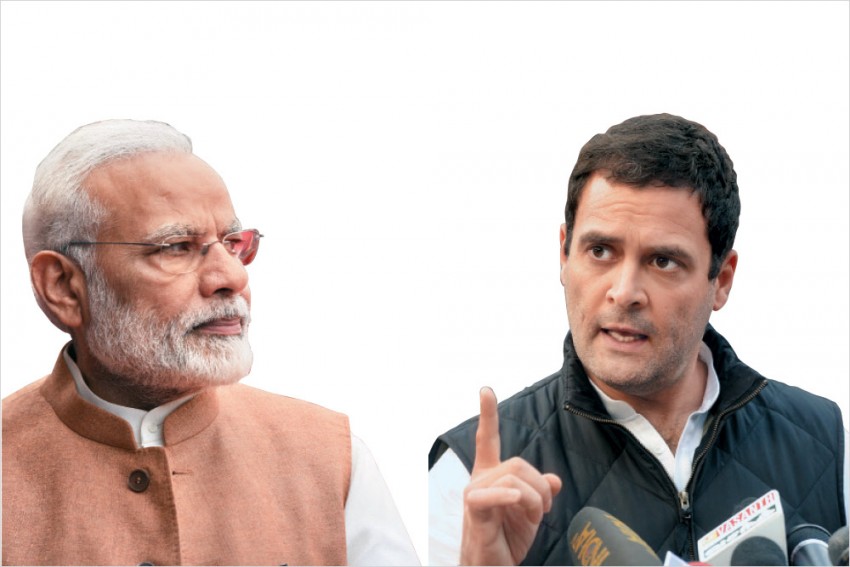 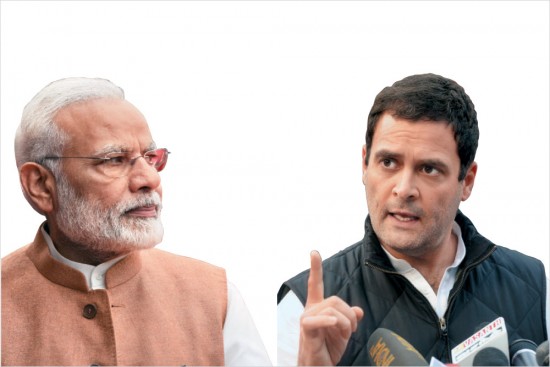 Elections are, in a real sense, about groups. Population segm­e­nts, parties, caucuses, ticket-see­kers, armies of worker ants on the ground…all of it has a collective nature. But sometimes the essential idea of a contest is given flesh to—incarnated—by personages. Faces stand in for ideas: people find them easier to relate to. As the 2019 Lok Sabha elections draw nearer, the battlelines are slowly morphing from shapeless, confused squiggles into something more cogent and compelling. If the dramatic faceoff between Prime Minister Narendra Modi and Congress president Rahul Gandhi dur­­ing the no-confidence motion debate set the tone, the aggressive pitch made by the Congress Working Committee (CWC) to take pole position among the Opposition was its validation.

It’s clear the Congress believes Rahul is ready to take on Modi in a one-to-one fight. Rahul’s relentless attack on the prime minister in Parliament on July 20 left no room for doubt that the Congress’s campaign will target Modi directly, and try to chip away at the narrative of a doer built around him. Even more strikingly, Modi made it about Rahul in his speech. Does that mean they still think of him as the Congress’s biggest liability? Or has the Gandhi scion managed to rattle him? Either way, a circle of light is zeroing in on Rahul too, defining him with more clarity. 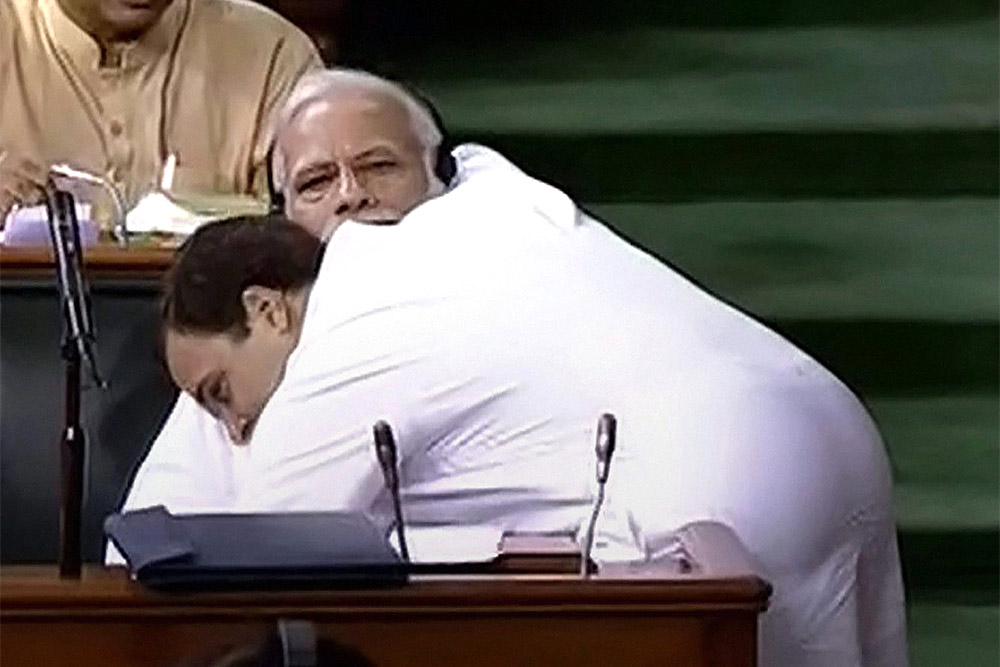 Whether it was the surprise hug or the combative rhetoric that preceded it, Rahul managed an extra buzz of visibility. The cheeky wink that followed, caught by a camera, became a point of debate. Com­munication and image-bui­lding experts claim it ruined whatever brownie points Rahul may have scored by his incisive speech. Political commentators are willing to overlook it as a gesture of youthful joy. Again, either way, it got talked about.

Whether the surprise hug or the combative rhetoric, Rahul managed an extra buzz of visibility. And his cheeky wink became a point of debate.

So now, regardless of how 2019 unfolds, which party hitches wagons with which constellation, we have the makings of a David vs Goliath portrait being etched on it. Can next year’s election really bec­ome a gladiatorial ‘Ra vs Mo’ affair?

Depends. Rahul still has to convince the jury that he makes the cut. What’s the verdict right now? Ad filmmaker Prahlad Kakkar says it was all going well for him till the wink. “His speech was good. The gesture of hugging the PM was also good. It was like a breath of fresh air in the vituperative political atm­osphere, but his wink took away everything. Even the hug ended up loo­king like a stunt,” says the adman.

According to him, Rahul is not made for theatrics. “He should play to his strength: decency, grace and silent dignity. He has a strong North, he shouldn’t let it be diluted by a bunch of cynical advisors. He has to believe in himself. Rahul can succeed only if he projects himself as the antithesis to Modi and the BJP style of politics. He cannot do a Modi on Modi and succeed,” Kakkar says. He feels Modi is the only Indian leader now who can handle a certain degree of drama, which is important in the age of non-stop TV and social media.

“TV captures everything transparently. When someone speaks from the heart, the passion and commitment come across on the TV screen. Richard Nixon had to be coached for one year before he was ready to depose in Watergate. Modi is a natural: his conviction and beliefs come across in his speeches. It’s his charisma that is making the BJP win, nothing else,” says the adman.

As long as it’s a contest of images, and gets consumed within that frame, the question of whether Rahul is a credible threat to Modi recedes in importance tem­­porarily. The sense one gets is that he has managed to faze the PM by taking him on, a hint that he may not be unassailable anymore.

Social and political scientist Suhas Pal­s­h­ikar says the fact that Modi and the BJP are attacking Rahul shows the Con­gress chief’s stature has grown in their eyes. He believes this can prove to be counter-pro­d­­uctive for the BJP. “They are obsessed with the possibility of someone from the (Gandhi) family bec­oming PM. This has propelled Rahul to centrestage. This is exa­ctly how the Opposition created the image of Modi as invincible,” he says. Pal­shikar is unh­appy about the emergent per­­­sonality-centric, presidential-style con­­­­test. “It does not augur well for democracy. It has to be about parties and their progra­mmes, not about personalities,” he says.

Even the other Opposition parties were not happy with the presidential-style contest vibe Rahul and his party tried to give. BSP chief Mayawati was quick to sound a note of caution to the Congress, saying there would be no truck unless her party is assured a respectable number of seats in states where the two parties are trying to forge an alliance, including Uttar Pradesh and Madhya Pradesh.

“The Opposition did a good job during the no-confidence debate...about democracy. Rahul was not the issue.”
Dinesh Trivedi, Trinamool Congress leader

Sources claim even Trinamool Con­gr­ess chief Mamata Banerjee was not happy about the lead role Rahul was trying to take on within the Opposition. TMC leader Dinesh Trivedi tells Outlook that the Congress has to decide whether their priority is power or democracy. “Mamata wants democratic values to be established. It’s not important who does it. One thing is certain, it cannot happen unless done collectively,” says Trivedi.

The ambivalence it was met with struck home—the Congress, it seems, got the message and instantly changed tack by declaring it was willing to acc­ept any non-RSS backed prime ministerial candidate.

Palshikar finds it strange that des­pite heading two full-term coalition governments, the Congress is still not equipped to handle allies. “Its penchant to project itself as supreme leader has to be kept under control. The Congress still views itself as a real nat­ional party with a birthright to preside over the Opposition. It’s for others to say, not for Congress, whether Rahul can be their leader,” he adds.

On the no-confidence debate, Trivedi desists from singling out Rahul as the newsmaker of the day. “The entire Opp­osition did a very good job during the no-con­fidence debate. The debate was about democracy, mobocracy, rule of law. Rahul was not the issue,” he reiterates.

A Samajwadi Party leader, too, says it’s unfortunate that only Rahul’s hug-and-wink made news and everything else was forgotten. “The tamasha was counter-productive. The substance and the points of debate should have made news, not Rahul’s antics,” he adds.

Without going into its political import, ad guru Piyush Pandey says whether the hug-and-wink gestures were against parliamentary decorum could only be dec­ided by the Lok Sabha Speaker. Com­­-menting only as a communication expert, Pandey says he personally doesn’t believe in theatrics. “Content is always more imp­ortant that gimmicks. That’s how I work,” he says. He also refutes the oft-touted “any publicity is good publicity” maxim, quoting the father of advertising, David Ogilvy: “If all you want to do is attract attention, then you put a gorilla in a jockstrap.” What happens there, he says, is that “people rem­ember the gorilla, but they may not remember the message”.

There was one message from that day: 2019 won’t be an insipid contest betw­een a novice and a colossus. It’s not as if the relative sizes have been entirely altered. Kakkar believes Modi’s charisma is still intact. And Trivedi equivocates tantalisingly about Rahul: “He’s not as weak as people think and not as strong as he believes.” But a small victory perhaps lies in the fact that he has ramped it up to RaMo.