An emigre from the cocktail circuit, Sheila Dikshit is the toast of Delhi's political banquet. Now polls beckon. 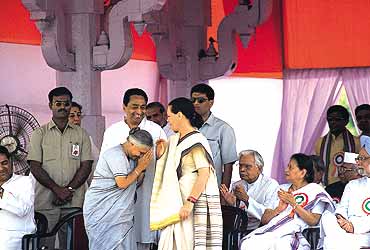 outlookindia.com
-0001-11-30T00:00:00+0553
If there's one state where the Congress is hopeful of beating the anti-incumbency factor in the assembly elections later this year, it is Delhi. Helped partly by a credible performance but even more by a moribund Opposition still struggling with the backlash of the Delhi Development Authority (DDA) scam, chief minister Sheila Dikshit is enjoying a spell of unexpected popularity. Not bad for a failed, cocktail party politician who parachuted into the job solely by virtue of being Congress president Sonia Gandhi's saheli no. 1. As Patwant Singh, a writer-architect and Delhiite of long standing, puts it, "She's given a sort of coherence to urban development, unlike other politicians who only want to regularise irregular things. She's also accessible, receptive to complaints, puts in a full day's work and seems clean."

On the political front, the recent aicc reshuffle sent out a clear message to party dissidents who've been out to topple her for the last four-and-a-half years: that she's very much in charge. By replacing the brash and dissident-friendly Kamal Nath with the mild-mannered Ahmed Patel as general secretary in charge of Delhi, Sonia has punctured the pretensions of the Jagdish Tytler-led anti-Sheila lobby.

Dikshit's journey from hawai (rootless) to lokpriya (popular) neta has been arduous. To begin with, she had to struggle to win her own assembly seat of Gole Market in central Delhi. Indeed, she had to stoop to seeking the assistance of an R.K. Dhawan acolyte (local Congress leader B.M. Bhama) to do so. She successfully neutralised an unhappy Bhama, who could have cut into her votes, by bringing him aboard on her own campaign. Then the powerful Delhi troika of Tytler, PCC chief Subhash Chopra and Sajjan Kumar (with the tacit blessings of Kamal Nath) made repeated attempts to oust her. At least 28 of the party's 53 MLAs wanted her replaced by Ambika Soni, who usurped her position as first among the "Sonia sahelis" but didn't get the CM's job.

Now if Dikshit gets a PCC chief of her choice in place of Chopra, her hold over the Congress organisation in Delhi will be complete. Given the demographic pattern in Delhi, a Bania like Jai Prakash Aggarwal or a Punjabi like Ajay Maken would complement her UP Brahmin image. The rebels would prefer someone like Yoganand Shastri, who is not part of the Dikshit camp. Although Sonia usually prefers a system of checks and balances, Dikshit's success in implementing the party's good governance plank may go in her favour. The fact that she continues to enjoy untramelled access to 10, Janpath has also not escaped her detractors.

Much of Dikshit's popularity is founded on adroit image-making and sustained developmental work. She combines a liberal sensitivity to middle-class concerns with grassroots populism aimed at Delhi's 40-lakh-strong slum population. She has managed to impress voters with her sincerity of purpose, largely by increasing accessibility to government officials. That the average Delhi citizen is pretty much satisfied with Dikshit's performance is evident from the reactions of several Residents' Welfare Associations (RWAs). Says Raman Grover, president of the Nizamuddin (East) RWA: "We're very happy with her handling of the power and water situation. Sanitation has improved as well. There's no dramatic change so far, but I'd certainly like to see her continue." Sarvodaya Enclave RWA president G.D. Dalwani, candid about his pro-BJP affiliations, says he's ready to give her the thumbs-up. "There's no doubt that power and water supply has improved. Overall, there appears to be a genuine effort to make things better."

It's significant also that Dikshit has managed to appropriate all the credit for implementing the Supreme Court's directive on cleaning Delhi's densely polluted air by introducing CNG.Likewise, she's seen as having facilitated the inauguration of the Delhi metro. But the real PR masterstroke was the "Bhagidari" scheme, which sought to foster the participation of citizens in governance by bringing residents' associations and officials together in much-publicised get-togethers. "It's the one thing I am most satisfied with," says Dikshit.

Citizens involved in the scheme, however, feel it's more hype than substance. Says Arun Sen of the Safdarjung Enclave RWA: "It's not very effective. There are promises but no follow-up action. We're still expected to run after officials rather than the officials coming to us." The approach is still a top-down "I plan, you participate" one, rather than involving the community in decision-making, he adds. But one thing that's earned her brownie points is the mushrooming of flyovers all over the capital, with Delhiites taking the inconvenience of traffic diversions entailed by their construction without too much complaint.

Ironically, in the long, hard summer ahead, water and power supply could still prove her undoing. Privatising power distribution was a controversial step and it was only with Sonia's backing that Dikshit pushed it through. It hasn't been a great success: transmission losses have declined only marginally, localised power cuts are a regular feature, babudom still holds sway and projected losses (according to Planning Commission figures) are higher than in previous years.

These are facts which have not escaped Dikshit. "Privatisation was a step in the right direction. But yes, one of the discoms—BSES—has not been able to pull its socks up. They have had some teething problems. I am quite satisfied with the other discom (Tata)." The Reliance-owned BSES, which supplies power to three-quarters of Delhi, has reportedly been pulled up by the Congress president herself. With heavy stakes in at least one more Congress-ruled state, the company has little option but to get its act together.

Dikshit's politics, like that of her principal BJP rival, Madan Lal Khurana, is marked by a heavy dose of populism. Last fortnight, she breached the BJP veteran's fortress by landing up in his home constituency and refusing to allow a 1,000-strong jhuggi cluster to be bulldozed by the DDA. The drama was, of course, captured by TV cameras.

Dikshit says she does not believe in relocating jhuggi-jhopdi (JJ) clusters. "You can't push them 30 km away from their source of livelihood. They're Delhi's service providers. I'd prefer to develop them in situ, but I don't have control over Delhi's land." This is the philosophy which wins her kudos from slum activist Mahendra Pradhan (of the ex-PM V.P. Singh-sponsored Jan Chetna Manch): "In the last two years, I have seen the Congress attitude to JJ clusters change. They no longer believe in hanging the Damocles' sword of the bulldozer over our heads. They have begun to pay attention to our problems." Another political gimmick—a scheme to delicense hawkers—is also on the anvil.

Since Delhi is yet to be granted full statehood, Dikshit can still pass the buck to the Centre on most fronts. "Law and order is not under our purview. We don't have control over land. If we did, the DDA scam would not have happened. We have only the most vague sort of authority over the municipal bodies which are autonomous," she points out. Indeed, both law enforcement agencies and the DDA in Delhi are directly under the central government.

Delhi's changing demography, which has seen the purabias (easterners) outnumbering the Punjabis and banias, has also been to her advantage. For one thing, it has helped her play down the "outsider" tag. "Delhi is a cosmopolitan city. Everybody here has come from somewhere else. I have been here since 1938.I studied and lived here most of my life, even if I did marry into a UP family," she says.

So far, Dikshit has had the advantage of an Opposition in disarray, riven by dissension. But in the coming months, the political climate in the capital is likely to get hotter, with Khurana preparing an aggressive campaign intended to dent her "clean" image. But with Dikshit's popularity in the ascendant, even for an old warhorse like Khurana, the race for Delhi looks a long haul.

Putting In The Stops