A sports quota job on his mind, the rural Punjabi flexes his steroid-pumped biceps. Disaster lurks... 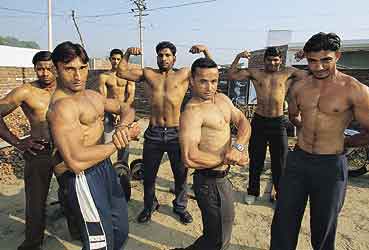 outlookindia.com
-0001-11-30T00:00:00+0553
It's 9.30 pm and most of Bulandpur village on the outskirts of Jalandhar in Punjab have turned in for the night. But in a dimly lit room, with Punjabi pop blaring from two crude speakers, a group of young men are working out on weight training machines. On the dilapidated wall outside, scrawled in chalk, is a ubiquitous sign you will come across in umpteen villages of the state—'Punjab Health Club'. At the other end of the village is the Bharat Health Club, another hole-in-the-wall outfit with a similar array of training equipment.

The muscle-building mania sweeping across small towns and hamlets in Punjab has nothing much to do with biceps or triceps. It's all about landing a government job. Bodybuilding is seen by many unemployed youth as an easy way to find jobs under the sports quota of government departments—preferably in the police, railways or at the Rail Coach Factory at Kapurthala. And here comes a nasty twist in the tale. In the mad hurry to build washboard abs and qualify for state-level bodybuilding competitions, the use of steroids has become rampant. So much so that its indiscriminate use has seriously debilitated many an aspirant.

Dr Randhir Kumar, vice-president of the Indian Bodybuilding Federation and president of the Punjab Bodybuilding Association, who also runs the popular Tara heath club and gym in Jalandhar, rues the state of affairs: "Use of steroids is quite common among the boys, particularly in the rural areas. They use it indiscriminately to overcome genetic shortcomings." The fact that there is no dope testing at state-level competitions emboldens the wannabe police constable or railway clerk. Kumar says at least 50 'boys' from his gym have made it to the police department in the last few years. Incidentally, the Punjab Police has a 3 per cent quota for sportspersons.

Most of those striving for the few government posts are from poor families. And it's not that bodybuilding comes cheap. A 25 mg shot of Decadeurobin, a popular anabolic steroid, costs Rs 38 while a 50 mg injection costs Rs 108. The coaches prescribe a diet of eggs, milk and porridge. Add to this the diet supplements, which can cost Rs 450 a month. Then the gym itself charges anywhere between Rs 50 to Rs 200 a month depending on the facilities. For each one who makes it, there are hundreds of hopefuls toiling at bench presses, the T-bar, chinning up equipment and what have you, mostly in poky, poorly equipped joints. Steroids, of course, are seen as the easiest way to making the grade.

Horror stories are aplenty. Two years ago, 22-year-old Raminder Singh 'Pammi' was part of the bodybuilding crowd. Training at a gym in Jalandhar, he had won numerous bodybuilding competitions at the state and national levels. His dream of landing a job with the Punjab Police in the sports quota was within touching distance when jaundice struck. Long-time steroid abuse had not just enfeebled his liver, it had drastically affected the immunity system's normal response to the onset of disease. Dream shattered, he is now left making endless visits to doctors to somehow get his appetite back.

Many of the stories one hears driving through rural Punjab have a similar ring. In search of the body that will ensure them a job, the young and the desperate inject themselves with Decadeurobin. The initial dosage is 25 mg; it is raised to 100 mg a day in a month's time. With no sports doctors at the gym, those using steroids are not even told of its long-term side-effects. When the drug is discontinued, the body has to be slowly weaned away, tapering the dosage over a period of time. But most of them stop it abruptly.

Ashok Kumar of Jalandhar stopped Decadeurobin when his father suddenly passed away. He also gave up on his protein-rich diet and costly food supplements. Within a month, he developed abnormalities in his excretory system and his leg-muscles stopped functioning. Today, at 28, he walks with the help of crutches.

But his plight has done little to deter friend Balbir Singh from taking the same path. "My aim is to get into the police and I am almost through as I have cleared the selection procedure. I know that the steroids I am taking will shorten my life by about 20 years. So what? I have to make a career for myself, that's what is important," he says.

At some places, village panchayats have released funds to set up gyms. Even here, steroids are the magic drug for better and bigger bodies. Sukhwinder Singh runs the Pumping Iron Gym at Bhogpur, set up a few months ago. He is quite open about the rampant steroid use. In fact, it makes good business sense for him. "See, most boys who come here don't have the patience or inclination to work long hours at the machines. All they want is rippling muscles as quick as possible. So I advise them to take one or the other steroid injection according to their paying capacity." At the other end, there are also people like Rajan Kumar of Mukerian village, a national champ in the handicapped category. Rajan is an ardent worshipper of stenazol—a metabolic steroid —which he takes on the "advice" of his coach in Gurdaspur while also running Mukerian's top health club. These people also stock up on different brands of diet supplements and make a handsome commission selling these. The bodybuilding fad has also led to a host of local companies manufacturing supplements. That many of them are laced with steroids is common knowledge. 'Anabolic Weight Gaining Formula' and 'Get Big Quick' are some labels on the boxes stocked at a village gym.

Just as the names of popular steroid formulations are bandied about commonly in health club circles, so are stories of those who fall victim to it. Common problems are infertility, liver malfunction, joint pains, aggressive behaviour and even heart strokes. Surjit Singh, who runs the Divine Yoga Centre in Jalandhar town, is treating several such victims, through naturopathy. "Since most budding builders have taken heavy doses, often on the advice of ignorant coaches or friends, once diseases strike their bodies, they quickly give up on bodybuilding," he says.

Jalandhar town too boasts of around 70 gyms, many of them in the narrow bylanes. Jasmeet Singh Cheri, the weightlifting coach of the bsf team, says around 90 per cent of the boys at these gyms are on steroids. Dr Randhir feels much of the problem could be tackled if it is made mandatory for gyms to employ only coaches certified by the National Institute of Sports, Patiala. As of now, there's no monitoring. There are many with a year or two of gym experience now coaching, even setting up their own gyms. The equipment in such establishments are often crudely welded pieces of iron put together at the neighbourhood blacksmith. But no one's complaining. Least of all the throngs of sweating males happily crowding these gyms. They know their dream body is just a steroid shot away.