Kumaratunga is squeezed into buying peace to save her
position 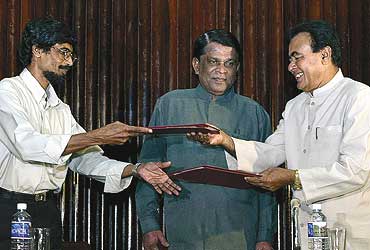 outlookindia.com
-0001-11-30T00:00:00+0553
In a bid to save her government, Sri Lankan president Chandrika Kumaratunga decided to sup with the Janatha Vimukhti Peramuna (jvp), a party with a queer melange of extreme Marxist and right-wing ideas which had staged an abortive armed uprising against her mother's rule three decades back and allegedly assassinated her husband 12 years ago. The deal between the People's Alliance (PA) and the jvp could save the government in Parliament but, more importantly, also threatens to throw the peace initiative into disarray and suck the island deeper into the economic morass.

Reduced to a minority in Parliament after the Sri Lanka Muslim Congress (slmc) left the PA to join the Opposition in July, and unable to stitch a deal with the main Opposition United National Party (unp) to form a national unity government, Kumaratunga signed the mou last Wednesday for the support of jvp's ten members, taking her tally to 119 seats in the 225-member Parliament.

But the alliance has come at a heavy price for the president. Not only did Kumaratunga agree to cancel the referendum asking people whether it was necessary to amend the Constitution and reconvene the prorogued Parliament, both preconditions for a deal, the mou now debars the government from devolving power to end the country's separatist war. It also binds the government to establish four independent commissions for overseeing the election commission, the public service, the judiciary and, more importantly, the police. In addition, Kumaratunga has agreed to reduce her record 43-member cabinet to just 20, abolish the executive presidency, freeze privatisation, and write off an estimated Rs 3.5 billion in loans to farmers.

With nothing more left to offer to the ltte, the option of negotiating a settlement with the separatist group is now foreclosed for at least one year, the duration for which the mou applies. No wonder Tamil United Front leader V. Anandasangaree says, "Any undertaking not to deal with the ethnic issue is unwise."

At the signing ceremony, jvp general secretary Tilwin Silva justified the decision thus: "We are doing our duty to the people by implementing the democratic reforms (the four commissions) they have been demanding." Says former minister Mangala Samaraweera, who quit the cabinet recently showing loyalty to Kumaratunga: "There are no obstacles to any peace process. The accord only stops the government from bringing any constitutional change for devolution of power." Critics, however, counter: why should the ltte give up arms when the government doesn't have anything to offer?

But will the alliance last? Says jvp propaganda secretary, Wimal Weerawansha: "This is not based on trust. There's a time-table to implement each condition that the government has agreed to. We will still sit in the Opposition. It is up to them to implement the agreement if they want to stay in power." Others, however, are sceptical. Says Dr Paikiasothy Saravanamuttu, executive director at the Center for Policy Alternatives: "There are very good arguments for the deal not lasting beyond this year. A major contradiction could be the economy—the November budget could well be an acid test."

The jvp, though, has effectively stolen the main campaign slogans of the unp which drafted the laws for the commissions with help from civil society groups. Says Victor Ivan, editor of the Sinhala political weekly, The Ravaya: "The jvp knows that the PA has broken into various factions. They are hoping to create a crisis within the unp as well by denying power to them and face the next election from a stronger position."

For Kumaratunga, the worse is still not over. A powerful group within her own party, the Sri Lanka Freedom Party (slfp), is rebelling against her and is allegedly holding talks with Opposition leader Ranil Wickremesinghe to topple the government. The dilemma before the unp is whether to bring a fresh no-confidence motion in Parliament or wait till the Cabinet is pruned and independent commissions are appointed. A smaller cabinet would swell the ranks of the disaffected; independent commissions are necessary to conduct free and fair elections in the future. "But," Ivan points out, "will the rebel group within the government hold on till then?"

With Kumaratunga skating dangerously on a thin majority, and with the hopes of a negotiated settlement to the separatist war dashed, the PA-JVP alliance isn't expected to usher in the political stability Sri Lanka needs so badly today.

The Sound And The Fury