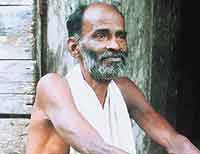 Perhaps, no other voter must have felt the shine and the goodness of democracy as C. Dasan, a former estate watchman in the northern Vadagara Lok Sabha constituency in Kerala, when he exercised his franchise on May 10. Booth No. 159 in Ward No. 4 of Kooranchundu panchayat in Kozhikode had just one name on the rolls.

The state poll machinery laid out an expensive voting facility for him, sending three polling officials, two cops and a driver into the woods. Dasan, a chronic bachelor at 65, walked to the booth set up at the Kerala State Electricity Board office, some 14 km away from the nearest Kakkayam town. And by the time he reached the polling station, it was well past 12.

Booth presiding officer N.K. Nambiar said it was altogether a new experience for him and his colleagues, waiting for the sole ‘VIP’ voter. However, the officials had to wait until the close of the polling hour as per the EC guidelines.

The state election officials, who went by the rule book that stipulated a booth within 1.5-km radius of a voter’s residential premises, said they had no choice. Kozhikode collector and returning officer T.O. Sooraj told Outlook: "It’s true that the state had to shell out Rs 1,200 to secure the single vote. The elaborate process of closing the expensive booth wouldn’t have been possible at the late hour when it came to my notice. I would have had to take up the matter at the highest level to denotify the booth."

Canada Dry For The BJP