The Premier And The Putintate 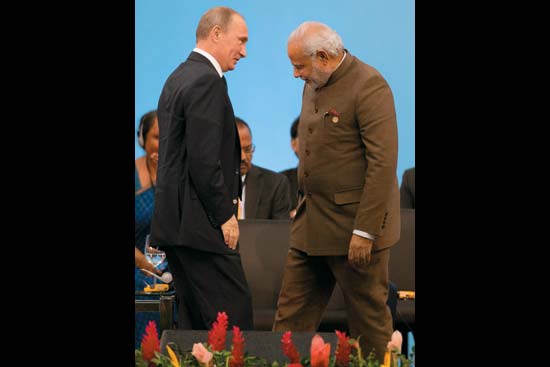 If there is to be a primus inter pares among the alpha male leaders of the world, Vladimir Putin would most likely be your man. His 170 centimetres is a commanding enough height; for the rest, he is the very picture of machismo:  whether riding horses bare-chested, chasing tigers in the wild or swimming in the icy cold Siberian rivers. It’s an image the Russian president himself has crafted carefully over the years, ever a willing poser for photographers. But the projection also comes in handy for supporters and detractors alike. To his admirers, he is the ultimate hero and the only leader on the world stage who can stand up to the West, the US in particular. It’s a view that has gained currency even outside Russia, in the wake of the slowdown of the western economies and the relative decline of American influence. His det­ractors, however, see in Putin an autocrat who not only deals ruthlessly with homosexuals and political dissenters at home but also backs his imperialis­tic designs to annex the territory of smaller neighbours via armed intervention.

The Russian helm has been in Putin’s hands for 14 years, but emotions towards him from both sides have peaked only after the Ukrainian crisis in March this year. After the cessation of the Cold War two decades ago, it’s only now that diplomatic battlelines between Russia and the United States have sharpened, over this strategically placed country along the Black Sea. Washington and Moscow are both engaged in a proxy war supporting rival factions to establish their respective control over the country after Russia engineered a referendum among the ethnic Russian speakers in Ukraine to annex Crimea. The US and European Union reacted by imposing economic sanctions on Russia and actively garnering support among other countries for Moscow’s isolation internationally.

At home, it’s a different story. “President Putin is riding a powerful patriotic and nationalist wave that has lifted his approval rating to 86 per cent and simultaneously generated righteous indignation against the West, particularly the United States,” says Moscow-based commentator Vladimir Sukhoi. The Russians, he says, see Putin’s current policy as “a reincarnation of Russian population’s interests, wherever these people live, strengthening of military power and the authority of the country.”

However the very reasons that make Putin popular in Russia are why people in the West criticise him and his policies. “Putin is not hated, but many, if not most, in the West deeply regret his turn away from democracy and his restrictions on liberties in Russia, which is linked to the rule of corruption and cronyism. Most also object to his grabbing of his neighbour’s territory,” says leading US political scientist Robert Jervis, of Columbia University. As a scholar, Jervis may perhaps be putting things mildly, because if one were to go by the stream of commentaries coming out of the West regularly, there would be no doubt that Putin is now a man that the West loves to hate.

Where does India stand in this love-hate relationship? Is he a bully or ally? India’s asking the question as it prepares to receive the Russian president on December 11 and 12, a month-and-a-half before it hosts Barack Obama as the chief guest on its Republic Day.

“Putin is coming here to seek assurance from India, and we are not going to let him down,” says a senior mea official. “We will show him our support in absolutely unambiguous terms.”

The Russian president is a photo-opportunist par excellence

On the face of it, there are no surprises in Putin’s visit to India, since it was always on the cards. It is part of the bilateral summit that the two sides have agreed on for some years now, one in which the Indian prime minister as the head of the government and the Russian president as the head of the Moscow government visit each other’s country every alternate year.

Prime Minister Narendra Modi may have yet to visit Moscow, but Gujarat chief minister Modi has been to Russia three times. This was significant at a time when the US and its European allies had castigated him for his alleged role in the 2002 Gujarat riots.

The tables may now have well turned, with Modi being the toast of the West, and both US and EU keen to engage with India under his leadership. By contrast, Putin is the political pariah now. It is, in fact, significant how quickly the image of Putin, who has always been seen as a ‘tough leader’, has changed in the West. Till a year back, he was widely seen as a statesman for his timely intervention in stopping the US from bombing Syria and opening another front in volatile West Asia. The Russian president’s argument that Syrian president Bashar al-Assad’s ouster could leave the country and region open to Al Qaeda and other Islamist forces growth now looks prophetic with the growth of ISIS and its control over much of Iraq and other parts of West Asia. Putin was then such a cause celebre that the New York Times carried his opinion piece on its op-ed page.

Ukraine changed all that. His decision to annex Crimea, which from the Russian viewpoint was to safeguard “legitimate Russian interest”, and the downing of Malaysian Airlines flight MH-17 by suspected Russia-backed rebels, turned the tide against him. However, leading US scholars and commentators like Henry Kissinger, Stephen F. Cohen and John Mearsheimer argue that the present crisis in Ukraine is entirely the fallout of faulty US and Western policies.

The rising hostility between Putin and the West was most visible at the G-20 Summit in Brisbane last month. Putin decided to station a fleet of warships off the coast of Australia in an apparent show of strength, and many of the leaders, particularly the Australian, UK and Canadian premiers, did not miss the opportunity to criticise Putin over Ukra­ine. That the Russian president was being treated as an unwan­ted guest was apparent not only from the various photos of the summit but also from the fact that he was the first leader to leave Australia, feigning fatigue of past days. There were reports that he had even fallen asleep during one of the sessions and deliberations at the summit. 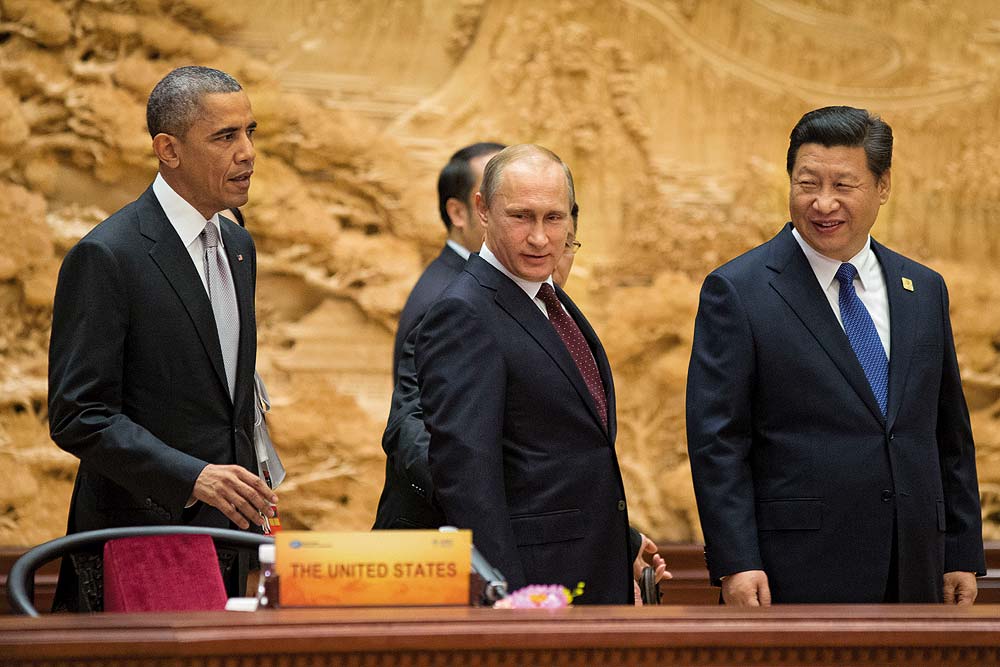 Nov 11, 2014 Barack Obama, Putin and Xi Jinping at the Apec summit in Beijing

The US and western leadership feel that the sanctions, along with the dropping oil and gas prices, have begun to bite Putin and he may not be able to maintain his tough stand on Ukraine for long. There are others, however, who argue that the sanctions have forced most Rus­sians, who have historically been exposed to a series of adverse situations, to rally behind Putin. Prolonged sanctions agai­nst Russia have also begun to hurt the Europeans, who not only earn a lot by selling their goods to Russia but also depend heavily on Moscow for gas and oil. The crisis may become deeper, especially as winter sets, feel observers.

Putin too seems to be acknowledging the hard winter ahead, because of the sanctions and slump in international oil and gas prices. While delivering his state of the union address on Thursday, the Russian president announced a slew of measures with tax breaks to keep domestic businessmen and entrepreneurs engaged in Russia while cautioning ordinary Russians about the hard days ahead. The India visit could then be a heartening exercise.

Modi on his part—despite his decision to keep India’s options open as wide as possible by engaging with all major international players, much on the lines of his predecessors—has made up his mind to make the most of Putin’s visit. The two had earlier met on the sidelines of the BRICS Summit in Brazil. At that meeting, Modi’s comment that “every child in India knows that Russia is a true friend of India” became a politically significant enough statement for Kremlin to display it prominently on its official website for days. The Russian president, described as someone averse to attaching unnecessary symbolism to a relationship like India’s where none is required, will have intense discussions with Modi and his team on December 11 afternoon.

As a special gesture to the Russian president, he has also been invited to address a joint session of Indian Par­liament. “This will definitely give him a chance to share his worldview with Indian parliamentarians and the people of India,” says a senior Indian diplomat.

It is worth noting that the cordial relations between Modi and Putin may also stem from the fact that they have a lot in common with each other (see infographic). Moreover, both are in their early 60s—Modi is 64, while Putin is two years younger—and therefore have enough experience to share their worldviews with each other.

Meanwhile, the American and western effort to isolate Russia internationally has led Putin to reach out to other key players in the world, particularly China, the world’s second largest economy and one the highest consumers of oil and petroleum. As part of a series of agreements between the two countries in recent weeks, China has agreed to invest more than $45 billion in Russia’s oil and gas sectors and also through heavy purchase of defence hardware.

Though India has shared much of the views with both Russia and China at the BRICS, SCO and other fora for a more equitable world, where voices of the emerging economies are heard and taken seriously, the growing Sino-Russian relations have also caused some worries in the Indian establishment.

“The challenge for India in its enga­gement with Russia should be in a manner which ensures that Moscow does not fall on Beijing’s lap,” says Nandan Unnikrishnan of the Observer Research Foundation in Delhi.

Indian officials point out that during discussions next week, the two sides will take up a lot of important contentious issues that include Russia’s decision to start defence supplies—in the shape of attack helicopters—to Pakistan. How­ever, despite this decision of Moscow’s—which is aimed at expanding its market for defence products akin to India expanding its defence supply sources by reaching out to US, Israel and France—New Delhi is confident that neither Moscow’s current engagement with China nor its arms sale to Pakistan will affect its ties with India in any significant manner.

“The most important capital in Indo-Russian relations is in the intangible: the countries’ trust for each other,” says Unnikrishnan. “As long as that remains, there’s little to worry about.”

Perhaps this mood and the trust they enjoy will reflect in the Vision State­ment Modi and Putin plan to issue at the end of the Russian president’s visit to indicate how the two countries would continue to cooperate with each other in the next decade.

With Obama due to visit India in Jan­uary, this is an assurance that Putin needs much more than Modi.

A Most Suitable Job For A Woman