The Pot Of Gold

MP's estate goes to an outsider. The clan is up in arms. Updates 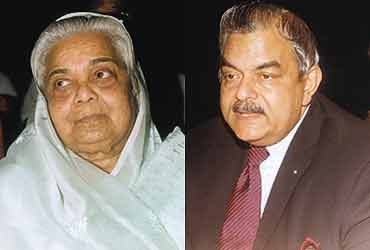 outlookindia.com
-0001-11-30T00:00:00+0553
The Birlas aren’t known for their flocking-together ways. The family members squabbled bitterly in 1986 over patriarch G.D. Birla’s will which ended up giving much more to favourite grandson, the late Aditya Vikram Birla, than to others. Similarly, when S.K. Birla desperately needed funds to make up for the huge losses incurred in Malaysia on speculative activities in the palm oil business there, none of the relatives bailed him out. In the end, SK lost his Malaysian companies.

So it was quite surprising when all the male members—Basant Kumar, Ganga Prasad, Sudarshan Kumar, Kumar Mangalam (who inherited the A.V. Birla group) and Yashovardhan—united together on July 13. That day, Rajendra S. Lodha, a chartered accountant and the auditor for several Birla group companies, read out the will of the late Priyamvada Birla. The four-line document stated that M.P. Birla’s widow, who died on July 3 without a heir and controlled a business empire of Rs 5,000 crore apart from other properties, had given everything to a rank outsider, Lodha himself. The Birla family exploded in anger, challenging the perceived usurper of their family assets.

Predictably, on Wednesday, Birlas’ solicitors Khaitan & Co issued a notice to Lodha demanding a certified copy of the will and the right to inspect the original within the next 24 hours. Later, BK told the media the clan would legally oppose the will. "We’re sure the will is fabricated," said a BK group source. To prove this, the family will have to show evidence the will wasn’t drafted by Priyamvada, or that it’s not in her handwriting.

The Birlas can also question the veracity of the two witnesses, Madan Vaidya Misra, medical director of Calcutta’s premier nursing home, Belle View Clinic, part of the M.P. Birla group, and P.L. Agarwal, a partner in Khaitan & Co, the same solicitors appointed by the Birlas to spearhead their court battle. In addition, they can claim Priyamvada was not of "sound mind" when she signed the will or that she was unduly pressurised by Lodha to sign it. As a Birla spokesman reportedly put it: "It may take time but we’ll ensure Lodha has nothing to do with the Birlas."

Explains Shailash S. Vaidya, partner, Kanga & Co, a legal firm who has worked for Birla group firm, Grasim, "The Birlas can challenge the will on one important premise: it was ancestral property. Inherited property can be sought by the Birla family because it definitely goes under the Hindu law of ancestral succession." However, this won’t apply to property or assets acquired by Priyamvada on her own. Most lawyers, though, maintain the choice of witnesses makes Lodha’s case a bit stronger. Misra’s evidence can deflect any suggestion of Priyamvada’s mental instability when the will was made in 1999. And Agarwal’s reputation as a professional may be legally unimpeachable.

Still, the Birlas aren’t likely to give up their claims on the widow’s assets. Publicly, the Birlas’ battle-cry has been with talk about the defence of family honour. They say the finances of the M.P. Birla group aren’t "important" (the A.V. Birla assets are six times larger, at Rs 30,000 crore). What’s troubling them is the will allowing Lodha to get a 25 per cent stake in Pilani Investments, an important holding company within the Birla empire.

At present, the AVB-BK combine holds 30 per cent in Pilani Investments, with MP (through Priyamvada) and GP controlling 25 per cent each, and the remaining shared between SK and K.K. Birla. More importantly, the holding company owns substantial stakes in a number of group firms—40 per cent in Kesoram Industries, 39 per cent in Century Textiles, and minority holdings in Grasim and Hindalco. As on March 31, 2003, Pilani’s total investments were Rs 533.35 crore, of which Rs 459. 92 crore was in quoted securities and Rs 143.62 crore in group firms.

If Lodha inherits MP’s assets, including the stake in Pilani, he can easily claim a place on the holding firm’s board. The Birlas are determined to keep out an outsider who may destabilise the group by selling off his stakes at a later date. Investment analysts point out though that Lodha, if he gets the assets, may not sell the stakes in Birla group companies in the open market. Says Gaurav Dua, analyst, Anagram Stockbroking, "If he tries to sell it in the open market, it will bring down scrip prices sharply as the market gets the whiff of such matters very fast. He can sell in bits and pieces. But that won’t affect anybody too seriously. If he acquires direct stakes in Grasim and Hindalco, it will be logical for him to retain them."

Meanwhile, certain family sources say the contentious will should not have come as a surprise. Says K.C. Mittal, MD, Birla Corporation, the MP Group flagship, "Lodha’s been associated with the group for two decades. He was inducted as co-chairman of the flagship company and has been involved in day-to-day affairs of the group, apart from assisting Priyamvada both personally and in business." In fact, the widow had told key executives several times that Lodha was likely to take over from her to maintain the unique identity of the group. Significantly, none of the Birla family members were on the board of any of the MP group companies.

Priyamvada’s decision to keep her portion of the Birla business pie away from the clutches of the natural family may also have been driven by the fact that she didn’t wish to bequeath the assets to Yashovardhan, the logical heir being the grandson of the late Gajanan Birla, MP’s brother. She apparently didn’t approve of Yashovardhan’s lifestyle, who’s seen more as a page three celebrity. Probably why Aditya, Lodha’s eldest son, said the "succession was visible to everyone. Everybody knew her mind. We are waiting for the mourning period to get over. Whatever we have to say, we will do so after that".

Lodha, who hails from a middle-class Marwari family and studied in St Xavier’s, is no pushover. He may actually prove to be the David fighting the Birla Goliath. A gold medallist from the UK-based Association of Chartered Accountants, he’s guided a number of Indian promoters in several corporate wars. Although he maintains a low profile, he was quite close to Priyamvada. The late widow loved travelling and Lodha, along with his wife, accompanied her quite often. They even travelled to the South Pole together!

Lodha undoubtedly has other ammunition to further his cause too. Now that the Birla family has decided to punish him and his firm by dropping the latter as auditor of group companies, the CA may strike back. Since he’s been closely associated with the family and group companies for many years, he must have inside knowledge of their operations. And if Lodha is forced to fight a messy battle in courts and in public, he may just decide to wash some of the Birlas’ dirty linen in public. Not an idea the Birla group is likely to relish.

But does Lodha have the will to challenge the combined might of the Birlas, who can hire the best legal brains and drag the case on for innumerable years? Even if the latter can’t win the initial legal battles, they are unlikely to give up. Under the circumstances, sources feel a peace plan may be worked out. One of the formulae being mooted is Lodha handing over the 25 per cent stake in Pilani Investments to the Birlas, while retaining the rest of the assets. If he doesn’t want to give up the Pilani stake, he can give an undertaking that he won’t try and destabilise the group. Whatever happens, the issue has become a heir-raising one for the entire Marwari community.

By Nikhil Mookerji with Charubala Anuncio

Q: What's Your Nationality? A: Of Course, I'm Pakistani