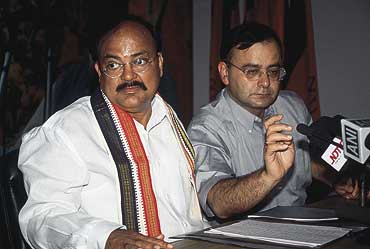 outlookindia.com
-0001-11-30T00:00:00+0553
After all the hype and fuss over a new-look, rejuvenated BJP, the fault-lines in the party are again emerging in stark relief. By the end of last week, it became clear that the more things change in the BJP, the more they remain the same.

The changes effected earlier this month were supposed to have settled the Vajpayee-Advani issue once and for all. By elevating L.K. Advani to deputy prime minister, the prime minister was seen as anointing his successor and quietly stepping into the background. The BJP was abuzz with a vision of the "real" leader finally leading it into the future.

But last week, Vajpayee made one of those famous moves that have made him so much more acceptable to a larger constituency than his party. By being absent from the House during the debate on Gujarat, he sent a clear signal that he was not in full agreement with his party's line on early elections in the state. Interestingly, Vajpayee loyalist finance minister Jaswant Singh was also absent from the Rajya Sabha, where he is the BJP parliamentary party leader, when Advani was replying to the Gujarat debate and fiercely defending chief minister Narendra Modi. Vajpayee's absence from the BJP's parliamentary party meet earlier that morning was also significant. The previous week, Vajpayee had attended the parliamentary party meet but handed the floor to Advani.

If there was a difference of perceptions on Gujarat, the tug-of-war between the PMO and the home ministry over the handling of Kashmir continued. The appointment of Arun Jaitley by the home ministry as interlocutor between the Centre and the J&K government only added to the confusion. It soon became clear that the so-called Jaitley mission ran the risk of stepping on the PMO's toes and did not have the prime minister's blessings.

Suddenly the party woke up to the fact that as long as Vajpayee remains in the prime minister's chair, he will be the final authority in government and retain the power of veto. Though reluctant to say anything on the record, a BJP cabinet minister observed, "We were surprised by the PM's absence (in the Lok Sabha). After all, Gujarat is a make or break election for us." Veteran party full-timer J.P. Mathur indulged in some typical BJP-speak: "Vajpayee is a more liberal type and may see things differently but he is not against Narendra Modi."

The Jaitley saga is illustrative of the vaulting ambitions of the BJP's second-rung leadership. Besides Jaitley, party president Venkaiah Naidu, I&B minister Sushma Swaraj and parliamentary affairs minister Pramod Mahajan are the ambitious Young Turks of the party. Having to revert to the party, he was compensated with the powerful post of general secretary in charge of 14 states/union territories. Besides, Jaitley is the official spokesperson of the party and has to make himself available to the media. Since leaving the cabinet, he has also resumed his law practice. Add to that his new role in Kashmir, where elections are due by October this year, and it is not clear why one man should be juggling so many responsibilities. In fact, it was Naidu who publicly raised questions about Jaitley's mission by saying he will have to adhere to the party line on Kashmir. A party veteran observed: "All these young leaders are ambitious and media-savvy and resent the others getting greater prominence."

The logic behind Jaitley wearing so many hats is all the more curious considering that former Uttar Pradesh chief minister Rajnath Singh's resignation as the legislative party leader was accepted on the grounds that as general secretary of the party in charge of several states he will have to devote himself to his new responsibilities. Rajnath told Outlook, "How can I continue as leader of the legislative party in the Lucknow Vidhan Sabha when I have so many other responsibilities here?" But against the nine states in Rajnath's kitty, Jaitley has charge of 12 states (four of which face elections in the course of a year) and two union territories.

The old-timers who have been sidelined in the recent changes also have the potential to make trouble in the future. For instance, the proposal to make Uma Bharati the Madhya Pradesh unit chief is facing stiff opposition from the state unit. Among those orchestrating the trouble is Kushabhau Thakre, the former BJP president who has been stripped of all responsibility.

There is also a coterie of Brahmin leaders, loyal to Murli Manohar Joshi, who feel orphaned in this new Advani-ordered dispensation. Among them is party vice-president Kailashpati Mishra, who has been kept out of the core team for political management. Mishra tried to put a philosophical spin to his marginalisation: "Why should oldies like us complain? The party needs young blood."

There are also deeper ideological anxieties. On the face of it, the BJP appears to have abandoned the path of moderation and decided to return to its Hindutva roots for the clutch of assembly polls in the build-up to the 2004 general elections. Former Bajrang Dal chief Vinay Katiyar's appointment as the Uttar Pradesh unit chief is cited as an example of this line. Says BJP general secretary Mukhtar Abbas Naqvi, "Ever since Kalyan Singh left, we have suffered in Uttar Pradesh. Katiyar is also a backward Kurmi and the party would like to recast him as a Kalyan Singh." But partymen concede in private that there is no guarantee that the Hindutva agenda will succeed. "Gujarat will be the test case. If we do well there, there will be a natural tendency to repeat the Hindutva line in other states like Rajasthan and Madhya Pradesh where elections are due, though each region is different," says a senior partyman.

Rampant factionalism in states where elections are due is also troubling the party. With Bhairon Singh Shekhawat nominated as the NDA candidate for the country's vice-presidentship, BJP handlers worry about their prospects in Rajasthan. Admits a BJP general secretary, "Shekhawatji was like an old Congress-style politician who kept the hardline RSS elements on the sidelines and could carry several factions." The proposal to make the flighty Vasundhararaje Scindia the state unit chief is scorned at by many party old-timers. Similarly, numerous Madhya Pradesh leaders have been making the rounds in Delhi to appeal to the high command not to send the high-strung Bharati to the state. She is also being projected as a potent mix of Hindutva and backward caste politics, the old Kalyan Singh formula which the BJP appears to be pitching its hopes on. Naqvi admits that the Scindia and Bharati proposals have been held up and will only be decided after the monsoon session of Parliament.

The BJP is literally trying to set its house in order. The party headquarters on Delhi's Ashoka Road is being renovated and modernised to make it fit for the new generation who have replaced the old guard. The party certainly can't be faulted for periodically trying to reinvent itself. The problem is that fresh new faces alone cannot offset the problems of factionalism, power-grabbing and ideological ennui that appear to beset the party.