The Players of Polemics

The Brecht-founded Berliner Ensemble doesn't move with the times. It dissects the times. 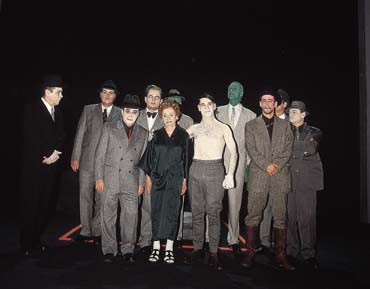 outlookindia.com
-0001-11-30T00:00:00+0553
Courage and the artiste rarely go together these days. In a changed world, where the vacuous hum of neon-lit supermarkets has drowned out all other forms of language and expression, the Berliner Ensemble dares to be different. It's decided to brave the adverse storm clouds of the culture industry and get wet rather than be burnt alive by the slow fire of inaction. It wears politics on its sleeve. Even now.

This repertory of committed theatre is thriving—it has 170-odd full-time professionals working with it and stages 100 shows in a year. Playwright-poet-novelist and Marxist theoretician Bertolt Brecht may have become history, but it's his political chutzpah and artistic commitment which holds the repertory—founded by him in 1949 in former East Berlin—together. Stephan Suschke, assistant director of Brecht's The Resistible Rise of Arturo Aui—staged in Mumbai, Calcutta and Delhi as part of the ongoing German Festival—says: "We still uphold our partisan political character, but in the present situation it's very difficult to sharpen our teeth. Ever since the collapse of the socialist system in Europe, there's been a vacuum. It's become very difficult to define the future and utopia. Theatre needs an alternative design to be creative."

But Suschke, who's also been the Ensemble's artistic director between '97 and '99, admits such predicaments are not new. The troupe faced its first major crisis during the heyday of the then socialist gdr when there was a qualitative decline in its productions. Says the 42-year-old Suschke: "The group had begun to view Brecht in an uncritical fashion. This was intimately linked to the political ice age that had come to prevail over erstwhile East Germany, thanks to the repressive Stalinist establishment."

With Heiner Mueller (from '92 to '95, he was one of the five people who constituted the repertory's management) in the forefront, things improved. One of the most faithful adherents of Brecht's Lehrstueck (Teaching Plays), he believed using Brecht uncritically was betrayal. In '95 he directed Arturo Aui under the Ensemble's banner for the first time. But it was a brief reprieve. The group's ideological zeal, says Suschke, nosedived again after the fall of the Berlin Wall and "is closely connected to the unequal manner in which German reunification is proceeding". Its political and, therefore, creative deceleration has been compounded by what "appears to be a levelling of all contradictions". Even after the Berlin Wall's fall and the demise of socialism in Germany the Ensemble has continued to be financially stable due to its productions. Says Suschke: "In fact, a troupe as well-off as ours should take more risks in doing radical theatre."

Werner Roloff, the 70-year-old stage manager and its oldest member, agrees. "I'm not prejudiced about the past. But post-Berlin Wall, westerners told us, 'now we'll teach you how to do theatre'. But I think the gdr's audience was much more politically sensitive." Markus Meyer, at 29 the youngest member of the troupe, doesn't quite agree. Says he: "It's not a question of east or west. It's just that theatre's character has changed. Now, it's entertainment without thought."

There are other creative problems as well. Suschke abhors the linguistic poverty of current German writers: "They don't have the language to describe structures of society. For some of them, to say 'I'm horny' comes easier than producing blank verse." This aesthetic struggle to preserve language determines their politics. Says Rollof: "The fact that I, a Jew, had to live through the Nazi horror sharpened my politics, even as a performing artist." Suschke invokes Brecht to stress that erstwhile West Germany "was not completely de-Nazified". He, however, thinks the rise of neo-Nazism in central Europe is overestimated. Instead, he sees a greater evil in globalisation's illusory world. Young Meyer, for one, admits: "Despite my ideological inclinations, I'm not as politically sensitive as I ought to be." But even for this awareness, he has only his theatre's Brechtian legacy to thank.