The Platform Of Hate

Till now the intelligentsia has identified with Vajpayee's and Advani's Hindutva. But it can no longer ignore Singhal's venomous rants. 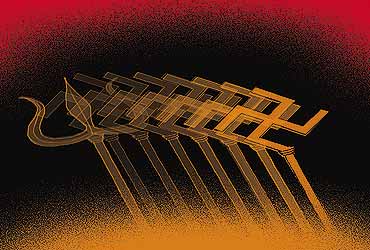 outlookindia.com
-0001-11-30T00:00:00+0553
Recently, the president of the Vishwa Hindu Parishad (VHP), Ashok Singhal, made a statement at a large public gathering that constituted a crime under the Criminal Penal Code of India (CRPC). At the Shivala Bhaiyan temple in Amritsar, he said: "People say that I praise Gujarat. Yes I do. Gujarat has been a successful experiment. Godhra happened on February 27 and 50 lakh Hindus were on the streets the next day." He spoke with pride of the fact that entire villages had been "emptied of Islam" and whole communities of Muslims had been 'dispatched' to refugee camps. This, he claimed, was "a victory for Hindu society, and a first for the religion". Then came the most chilling statement of all: Gujarat would be repeated all over India.

Singhal's statements incontrovertibly violate section 302 of the crpc which makes incitement of communal violence a criminal, non-bailable offence. Why then is the Uttar Pradesh government letting him get away with it? Why, especially, is a government headed by Mayawati, which claims to draw its support from not just lower-caste Hindus but also Muslims, being politically insensitive to the point of further jeopardising its own votebase? One reason could be that it is desperate to cling to power and does not want to alienate its partner in office, the BJP. The other could be that such incitement of communal violence has become commonplace and no longer attracts the notice of the police. Whatever the cause, the freedom granted to Singhal and his ilk to preach hate against 140 million Indians, and to incite other Indians to drive them from their homes, and preferably kill them, shows how far Indian democracy has departed from being a society governed by the rule of law and how deep it has sunk into a morass of lawlessness.

Singhal is an open and avid admirer of Adolf Hitler. But even in Mein Kampf, it is difficult to find a paragraph as filled with mindless hate as what he spat out at the meeting in Amritsar. One needs only to examine the undertones of what he said to detect the edges of madness in the man. Take his reference to Godhra. There is sufficient proof now with the authorities in Gujarat that while the attack on the train was triggered by a quarrel on the station platform between Muslims and kar sevaks, what was done 300 metres outside the station was part of a contingency plan that had been cooked up by the local Muslims well in advance of the actual attack. But Singhal is so proud of the way in which so-called Hindus raped, burned alive, and ripped foetuses out of the bodies of defenceless Muslims that he does not mind claiming that the VHP actually planned and executed the Godhra massacre in order to bring the Hindus out "in defence of their religion". This is, of course, what Muslim organisations say.

Singhal is proud of the fact that entire villages and urban localities had been emptied of Muslims, but he refuses to ask himself, let alone answer the question that must have been on every one of his listeners' minds: where will the displaced Muslims go? Singhal would, of course, like to see them herded all the way to the Pakistan border and pushed across it, as two million Armenians were once marched across southern Turkey into Syria, dying like flies all the way. But once again he simply refuses to ask himself what Pakistan's reaction would be. The answer, of course, is that Pakistan would be forced to declare war on India. If the dispatch of nine million refugees from East Pakistan to West Bengal gave India sufficient cause to attack Pakistan, then a 'Hindu' ethnic cleansing and genocide that drives millions of Muslims to Pakistan and destroys its extremely fragile economy and society would surely be sufficient reason for Pakistan to do the same to India. Singhal seems to have forgotten that Pakistan has nuclear weapons.

And does Singhal believe for a moment that the world will stand by and allow more Gujarats to be enacted, and pogroms against Muslims to become part of the official policy of the ruling party of India. India is a signatory of conventions both on the protection of human rights and against genocide. Only a man who inhabits the bottomless depths of a well of ignorance can not know how easily severe international political and economic sanctions can destroy our country.

Till now the Indian intelligentsia had, by and large, ignored Singhal's poisonous rants, preferring to identify the BJP and Hindu revivalism with the likes of Atal Behari Vajpayee, L.K. Advani and Madan Lal Khurana. But it cannot afford to do so any longer. A string of electoral reverses in state assembly elections after 1998 has all but destroyed the Vajpayee-Advani line within the Sangh parivar. That is why they are going along with, and even defending, Narendra Modi's actions right up to the Supreme Court. The Congress too is strangely silent—preferring to score small, tactical, debating points against the BJP, instead of meeting, head-on, the larger existential threat that its surrender to Hindu hardliners poses to the nation as a whole. It is, therefore, time to take the threat that people like Singhal are holding out seriously, for they are doing so in deadly earnest.

The Supreme Court has postponed the Gujarat elections at least till November, possibly December. This marginally brightens the chance that sanity, in the form of the formidable Congress leader, Shankersinh Vaghela, might prevail. But nine more states are going to the polls towards the end of next year. If Singhal carries out his threat of forcing the BJP to fight these on a platform built out of hate, the repercussions within the Muslim community could easily make India ungovernable in the coming years. That is what we must all join to prevent from happening.