Can Priyanka’s late burst of belligerence revive a spent Congress? 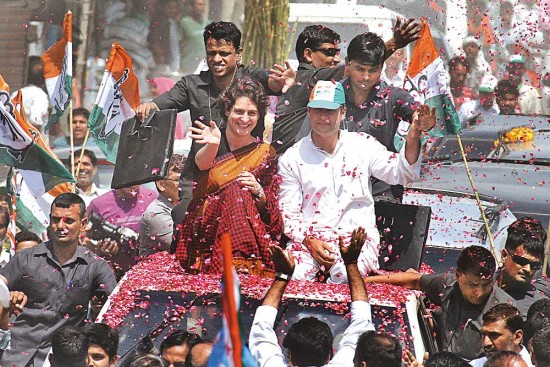 On Tuesday, April 15, with just a month to go before the results of the 2014 Lok Sabha polls will be known, Priyanka Gandhi Vadra, the youngest of the first family of the Congress party broke an unwritten rule of the larger, undivided Gandhi clan, of never attacking another from the family in public. Priyanka chose her cousin, Varun Gandhi, the BJP candidate from Sultanpur, for her salvo, accusing him of “the betrayal of my family”, basing her anger on the anti-Muslim hate speech that Varun had delivered five years ago in another Lok Sabha poll. Both Priyanka’s comments and her anger at Varun on his politics came unprovoked. The divisions in the Gandhi clan being made public for the first time was attributed to the divisive politics that Varun’s party endorsed. Naturally, Priyanka dubbed Varun’s association with the Bharatiya Janata Party, the Congress’s arch rival this election, as treason.

But betrayal as a theme is not new to Priyanka’s election campaign. She had used it effectively 15 years back, in 1999, when just 27 years of age and clad in cotton saris akin to her grandmother Indira Gandhi, she had arrived in Rae Bareli to campaign for party loyalist Satish Sharma and mother Sonia Gandhi in Amethi. Emu­lating Indira’s trademark stride and style, Priyanka had not just evoked memories of her martyred grandmother but even demanded unflinching loyalty from the electorate in the family bastion, against fam­ily member-turned-foe Arun Nehru. Back then, she had asked the electorate how they had allowed a back-stabber like Arun Nehru to enter the electoral fray in Rae Bareli. The latter famously faced a drubbing at the polls that year.