The Pillars Of Asok

IITians-turned-Americans is the oft-heard story, now the brains that refused to drain 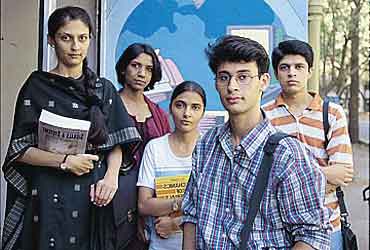 The IITians
By Sandipan Deb
Penguin/Viking Rs 425; Pages: 375
At a recent campaign gabfest, presidential contender Gen Wesley Clark suggested to a rather astonished American audience that graduates from India’s Indian Institute of Technology (IIT) should be encouraged to stay permanently in the United States by offering them something like a fast-track Green Card. Considiering the remark came amid a toxic debate about immigration and job loss, you could put it down to the general’s lack of political savvy. On the other hand, you could also attribute it to the cult status IITians have acquired as some sort of ubergeeks—an eminence sufficiently overblown for the cartoonist Scott Adams to mildly deflate (Asok in the Dilbert frames). However, the general’s proposition was simple: American interests would be best served by taking the best minds; and they don’t come better than the now larger-than-life IITians.

It is no surprise then that the rather simple title of Sandipan Deb’s book—The IITians—suggestively incorporates the allusion to titans. When they were established some five decades back, the five IITs (now seven and growing) were seen as a hothouse for India’s best and brightest minds. Nourished with state funds, they were meant to serve the temples of modern India. But deprived of challenge (their version), or lured by greener pastures (popular belief), nearly half of them went West, mainly to the US. Here, they bloomed and flowered in the ’70s and ’80s, and by the ’90s, some of them scaled such heights in academia, techdom and entrepreneurship that they induced a degree of giddiness among friends and fraternity. Celebrated in media, they also invited envy, scorn, disdain from those they left behind.

Fortunately, Deb’s book brings a sobering perspective to the IIT story, dealing not just with the alumni’s runaway success (or the success of its runaways), but also the plodding commitment of its home-sworn, and the wrenching sadness of the occasional loser. In around 350 compelling pages filled with arresting incidents and anguished arguments, Deb takes us through the origins and growth, hi-jinks and low life, of India’s great experiment in higher education. He does so engagingly on two counts: an editor with Outlook magazine, he brings a writer’s eye for detail and anecdote. And more importantly, he is himself an IIT alumnus, one of the half-dozen I know who betrayed the investment in engineering and strayed into media. Ah well, engineering’s loss is journalism’s gain.

Inasmuch as many of the IIT success stories are datelined USA, Deb is not swept away by this dominant theme. In fact, the most engaging accounts in the book are the ones about IITians who work close to the ground, bhoomiputras such as Ashok Jhunjhunwala, B.K. Syngal and Dunu Roy, all of whom forsook the allure of the West to put their imprint on modern India. The swadeshi stories are less known and more inspiring than the many videshi sagas chronicled in today’s awed-by-America media. If anything, offshore IITian achievements come across as rather empty and self-absorbed amid the nation-building passion that’s suddenly infused India. However, their role in highlighting the genius of India has to be acknowledged; Deb does that artfully.

What goes into the making of the IITian, rather than the story of the school itself, occupies a good part of the book. The answer, it turns out, is rather straightforward. If you select, by fair and rigorous methods, some 3,000 of the brightest teenagers in the country and throw them together for four years in a competitive smelter with pots of freedom (or freedom of pot, as some alumni would suggest), they come out pretty good. They also form a lifelong clique whose hierarchical loyalty is seemingly to hostel, institute and country.

Deb recounts a meeting where Victor Menezes, vice-chairman of the Citigroup, wants to leave an IIT alumni strategy session in US for a business meeting. Fellow Bombay alumnus Jay Desai pleads with him to stay back but Menezes is adamant that he has to leave. Finally, Desai touches his arms and says, "Please, Victor, do this for Hostel Eight." Menezes, one of the top 50 bankers in the world, stayed back for Hostel Eight, writes Deb. Such powerful anecdotes explain the kinship of IITs where alumni who meet after a decade or two reconnect like it was only yesterday.

One gets the feeling though that Deb’s recent sorties to the IIT campuses have depressed him. It’s not the same anymore, he complains. This is a common affliction. Every generation thinks it was the best and it has been downhill after that. Warts and all, the IITs are still the best thing that came out of the Indian educational system. The minor carping apart, Deb’s book is an engaging celebration of that success and an insightful look at the pitfalls and challenges it faces.

(The reviewer is the Washington-based foreign editor of The Times of India and author of The Horse That Flew: How India’s Silicon Gurus Spread Their Wings.)