O come all ye faithful! Follow the wiper-out of the Congress! 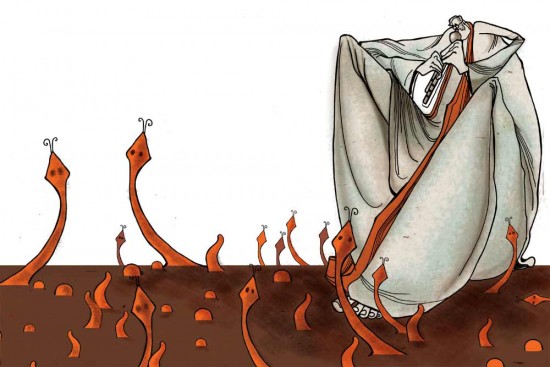 Get out of your ivory tower, liberals! Hundreds of millions of spellbound people have followed the Pied Wiper of Congress, and despite your pathetic resistance, there he is. People roared because they saw him bringing rain even as you likened him to dark clouds. They saw him as a dream and you wished him away as a nightmare. Were you not out of your mind? Stop yowling over your defeat. Is he to blame? Rather, it’s your last hope—that is, the hopeless Congress—you should be blaming. This was the party that expected a wondrous mandate for having split one Centre into three centres. A leaderful, leaderless forum! Can you fault people if they went for one Centre, one voice, one leader, a Fuehrer of sorts? The failures of UPA-II not only discredited the Congress, they discredited democracy. Look forward, and worry not.

These dirty Congress rhetoricians, they divided people along religious lines and foisted the blame on the Pied Wiper. Throughout the campaign, he never brought religion to his lips. But the Congress kept crying, “Hindu wolf! Hindu wolf!” Its leaders didn’t want the minorities to think of development, which was drawing Hindus to the Pied Wiper in large numbers. Was this inclusive or divisive politics? Would you still disagree with the Pied Wiper when he vows to eradicate the Congress nationwide, like smallpox? Not only the Congress, but also the SP, the BSP and the RJD. He wants no one in the way when his party reigns by itself and goes about building a multi-religious, unicultural India, shepherding the minorities into their ancestors’ way of life.