The Perils Of Polarity

No matter how perverted the issue on which they pitched their nationalist tent, in the end it was Gujarati pride vs the rest of India. 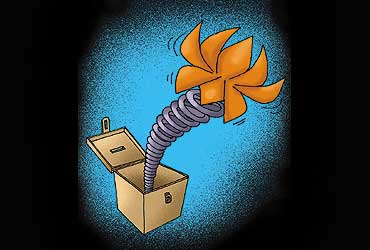 outlookindia.com
-0001-11-30T00:00:00+0553
Now that the Gujarat elections are over, the question in everyone's minds is, "What does it portend for the future of India?" It would be futile to pretend that this was simply an election no different from the state assembly elections that took place in Uttar Pradesh or West Bengal two years ago. Narendra Modi's decision to deliberately polarise the vote on communal lines against the wishes of the prime minister and deputy prime minister turned it into an election with not only national but existential significance for the country and its future. To put it bluntly, were the attempt to polarise the vote throughout India on communal lines to succeed even part-way, it would start a chain reaction of violence that would end by destroying the country. That is the Pandora's box Gujarat has opened. Can it be shut? Will it be shut?

The sheer size and manner of the BJP victory makes it a certainty that the 'Gujarat strategy' will be tried in Himachal, Delhi, Rajasthan, Madhya Pradesh and Chhattisgarh next winter. Its key feature was that it succeeded in polarising the vote around a single issue. The BJP won a landslide despite a 5 per cent rise in the Congress voteshare because its voteshare too rose by 5 per cent. The losers were smaller parties and independents whose vote fell from 20 to 10 per cent. People, in short, cast aside all local considerations in order to express themselves on a single issue. Was that issue simply animosity towards Muslims and a desire to put them in their place or did Modi touch something deeper, something peculiar to Gujarat? If it was the former, then the attempt to polarise the vote in northern India will to a large extent succeed as it is always possible to take out processions, cause riots and thereby whip up communal feeling. However, if it was the latter, then polarisation could remain confined to Gujarat. It is therefore essential to understand the root causes of the Modi landslide.

The origins of Hindu consolidation go back to the deliberate attempt made by the Congress party after its return to power in 1980 to form a KHAM—Kshatriya, Harijan, Adivasi and Muslim—alliance in Gujarat to break the Sangh's hold on power and create a stable base for itself. This sent a strong wave of anger through the Hindu community not only in Gujarat but also much of the rest of India because it was seen as an attack upon the organic unity of Hindu society made by attempting to divide it horizontally on the basis of caste and ethnicity. The immediate gainer was the BJP but nowhere more so than in Gujarat. Regrettably, only a year or more later, in 1982, the state saw an exceptionally ugly spate of communal riots in which for once Hindus were the main losers. The ingredients for turning the state into a laboratory of the vhp's brand of hard Hindutva were therefore all in place. Everything that happened in the rest of the '80s—the Pakistan-backed terrorism in Punjab and later Kashmir and the intransigence of Muslim spokesmen (as the Hindu right saw it) over the entirely reasonable demand to shift the Babri Masjid to a new site in order to free the Ram Janmabhoomi, and the riots that followed in the late '80s—fed the vhp's propaganda. That was why Gujarat bucked the anti-insurgency trend and remained under the BJP for almost the entire decade. But it was the saffron of Ashok Singhal and Praveen Togadia and not that of A.B. Vajpayee and L.K. Advani that held sway.

It was in this charged atmosphere that Godhra occurred. Whatever may have triggered this cold-blooded mass murder, there could be absolutely no doubt that a mob of 2,000 persons stood around the bogey and made sure that none of its 60 or so occupants were able to get out while it burned to the ground. At Signal Falia, these could only have been Muslims.One can only imagine the cold-blooded brutality of that concerted act. But it was not lost upon Gujaratis. This was where the media—specifically television—stepped in. Godhra was the first act of communal murder that was brought into the drawing rooms of every family in India, and nowhere more so than in Gujarat.

Modi's first act in response to this was directly responsible for the carnage that followed but it could have been a mistake born of inexperience, for he had never held ministerial power and had been chief minister for less than five months. When the vhp declared a state-wide bandh, he immediately gave it the backing of the government. That paralysed the police, stopped it from making preventive arrests and gave the mobs, inflamed by the TV coverage and 10 years of vhp campaigning, the leaders they needed.

Modi was quick to capitalise on the anger of Gujarati Hindus but he was able to turn it into something much larger and more durable only because of the response of the rest of the country and the media in particular. A striking feature of all the reporting was the way in which it concentrated upon Ahmedabad and central Gujarat and almost forgot Godhra. The media could not be blamed, for the retaliatory violence far outstripped the trigger for sheer scale and brutality. But it proved grist to Hindutva's mill. International condemnation and leaked British High Commission reports also played into Modi's hands. In the end, it became Gujarati pride vs the rest of India, no matter how perverted the issue over which Gujaratis had decided to pitch their nationalist tent.

The above recapitulation of events shows the extent to which the developments in Gujarat were sui generis and can't thus be replicated in Rajasthan, MP or Delhi. That does not mean that the BJP—now little more than the vhp in sheep's clothing—won't try to do so. It is up to the Congress, the Muslim leadership, the intelligentsia and, above all, the visual media not to allow themselves to be turned into pawns in Hindutva's game.

Will The Stallion Baulk In Mid-Gallop?