A calculated programme of social service recruited the poor, retained the rich and won the BJP a rich harvest

The BJP’s success in the 2014 polls was unprecedented by many metrics. One measure that analysts rightly focused on was the party’s success with voters from outside its traditional caste Hindu base. The BJP’s majority depended on a strong showing with OBCs, even with many Dalit and Adivasi voters. By constructing a ‘rainbow coalition’ of support across the caste spectrum, the BJP was thought to have transcended its image as a ‘Brahmin-Bania’ party. Such optimist commentary contrasts with post-­­mor­tems of the party’s performance a decade earlier. In 2004, the NDA’s unexpected ouster was seen to signal the BJP’s inability to consolidate support outside its savarna base, prompting some to conclude that it would str­uggle to remain relevant in India’s increasingly competitive democracy. 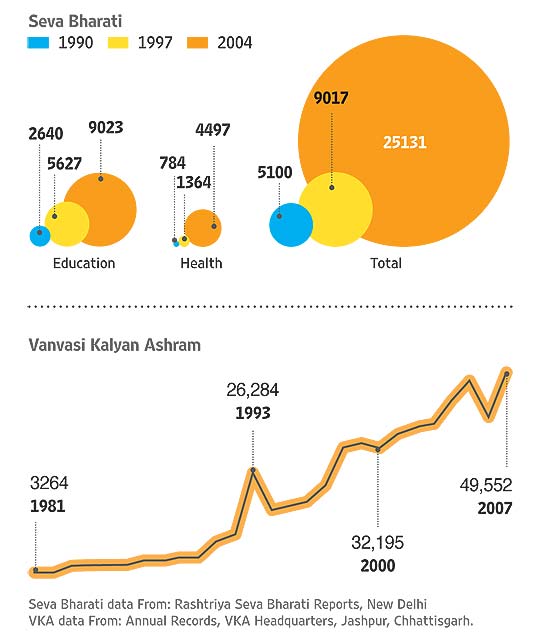 This marked shift in public commentary inaccurately suggests a dramatic turn in the BJP’s fortunes with other caste voters. That the BJP improved its performance with voters in practically every social category in 2014 is obvious, given that it won 100 seats more than it ever has in the past. Yet a narrow focus on one victory, however historic, obscures imp­ortant changes that began taking place well before the 2014 polls. Specifically, it masks how the BJP had already begun constructing ‘rainbow coalitions’ in several Indian states.

This point is most strikingly evident when we consider the BJP’s performance with Dalits and Adivasis—long reg­arded to be the party’s ‘least likely supporters’. Data from the National Election Studies conducted by Lokniti showed that in 1996, the BJP had won more than 30 per cent of the combined votes of Dalits and Adivasis in only one of India’s 17 major states (Gujarat). Yet by 2004, the party crossed this threshold in seven states, mostly clustered within central India.

How did a Brahmin-Bania party begin to win the support of non-savarna and tribal voters? One possibility is that the party implemented significant shifts in its economic policy positions to distinguish itself as a champion of the downtrodden. Yet there is little evidence of such dramatic pro-poor shifts, either in the BJP’s election manifestos, or in public exp­enditure patterns in states where it did well over the past two decades. In fact, arguably the most significant change in its economic doctrine—its move from critic to sup­porter of liberalising market reforms in the early 1990s—was made in response to the demands of its elite core supporters.

If not policy shifts, then what explains many Dalits and Adivasis turning to a party historically identified with caste Hindu interests? Similar questions have been asked of poor voters in other democracies. In the United States, Thomas Frank wondered “what’s the matter with Kansas?” after observing high levels of working class support for Republicans in his native state, despite the party’s economic platform obviously favouring wealthier voters. Within the US, one popular explanation of such behaviour is that conservative parties can ‘distract’ the poor from their economic interests by appealing to their moral and cultural preferences (on issues pertaining to gay rights or abortion, for example).

Equivalent arguments in India have focused on the potential of communal agitations to distract non-savarna castes from their economic concerns. By polarising electorates along religious lines, the BJP could use such agitations to unite Hindu voters across caste divisions. Indeed, the Ram­janmabhoomi movement was centrally motivated by the desire to combat the politicisation of caste in the post-Mandal era. Yet the BJP did not do systematically better with Dalits and Adivasis in states with higher prior levels of Hindu-Muslim conflict. The party found that its savarna caste base was easily mobilised by perceived ‘threats’ to Hindu religious traditions that had historically privileged them. Dalits and Adivasis, who were often marginalised by such traditions, were far less responsive to such appeals.

Service is very attractive to Hindu nationalists as it balances the interests of voters, caste elites and Sangh activists.

In the wake of the failure of the Ramjanmabhoomi mov­e­ment to attract a broader base, the BJP looked to win mass support by increasing the proportion of its candidates that came from disadvantaged communities. This so-called ‘social engineering’ approach fostered the rise of non-elite BJP leaders, including Kalyan Singh, Vinay Katiyar, Uma Bharati, and Bangaru Laxman. Yet this strategy fuelled a tremendous backlash from the elite castes who were being displaced to make room for entrants from other castes into the party. Consequently, the BJP had to scale back on social engineering. By the turn of the century, the party rarely fielded Dalit and Adivasi candidates outside of reserved seats. For example, between 2004 and 2009, the BJP nominated SC or ST candidates in non-­reserved constituencies only 3 per cent of the time. By comparison, the Dalit-led BSP did so more than 30 per cent of the time.

While strategies like the Ayodhya agitations and ‘social engineering’ have received considerable scrutiny, other developments within the Hindu nationalist movement have escaped popular attention. Chief among these has been the marked expansion of Sangh parivar chapters oriented to providing basic social services to Dalit and Adivasi communities. Service activities have long held a place within the Sangh’s panoply of activities. The RSS garnered significant attention for its work with Hindu communities during Partition, and during relief efforts following natural disasters such as the 1955 Punjab floods, and the 1977 cyclone in Andhra Pradesh. However, this initial focus on high-profile incidents meant that service efforts tended to be episodic, and not specifically targeted toward non-savarna caste communities.

It was in the ’90s that the Sangh parivar began to view service work—such as one-teacher schools and village health workers—as part of a systematic strategy thr­ough which to integrate non-savarna castes. This realisation led to a huge expansion of their service wings, including Van­vasi Kalyan Ashram (the tribal welfare wing), and Seva Bharati.

Equally importantly, the states in which these service chapters were expanded—such as Chhattisgarh, Madhya Pradesh, and Jharkhand—were also the states in which the BJP made the sharpest inroads with Dalit and Adivasi voters. Across all 17 major Indian states between 1996 and 2004, a 10 per cent increase in the density of service organisations led to a 4.5 per cent increase in the BJP’s voteshare among Dalits and Adivasis. This effect held even after we account for other features of a state’s political environment that might explain the BJP’s success, such as economic growth, the size of religious minority communities, and even the party’s own prior performance in a state.

Service is attractive to Hindu nationalists because it uni­quely balances the diverse interests of disadvantaged vot­ers, the powerful castes and Sangh parivar activists. For poor voters, service chapters provide tangible material ben­efits, unlike strategies based on communal agitations. By providing valued benefits, service workers increased goodwill for Hindu nationalists, and reduced perception of the BJP as a Brahmin-Bania party. For savarnas, a service-based approach was palatable because it circumvented having to sacrifice valued positions in the party to other castes, in contrast to a social engineering approach. For Sangh activists, service was appealing as it served to explicitly counter efforts among these castes by non-Hindu organisations (primarily Christian missionaries).

Thus, service work—which was not without an ideological edge—was uniq­uely well suited for the BJP’s need to recruit the poor and retain the rich. By helping the BJP improve its performance with marginalised communities, service chapters helped the party win office in several states. State units of the BJP have varied in their ability to successfully build upon these breakthroughs. In states like Karnataka, BJP governments frittered away their opportunities by descending into factional disputes. In states such as Madhya Pradesh and Chhattisgarh, the executive wing of the party consolidated support with expanded government schemes for the poor. This consolidation of BJP dominance across central India was a key foundation upon which its recent victory was built.

The rise of Narendra Modi was clearly the defining narrative of the 2014 elections. Yet the 2004 elections warned us to be wary of prisoner-of-the-moment punditry telling us that one person singly delivered a national victory. Ten years ago, such analyses rushed to tell us that the BJP would never win the kind of victory it just did. If we zoom out from the narrow optics of a specific election, it becomes clear that Modi’s charisma did not succeed in a vacuum. Rather, it built upon patient and painstaking efforts to rid the BJP of its Brahmin-Bania label, village by village, voter by voter.

(Tariq Thachil is an asst professor of political science at Yale University, and author of the forthcoming book Elite Parties, Poor Voters: How Social Services Win Votes in India)