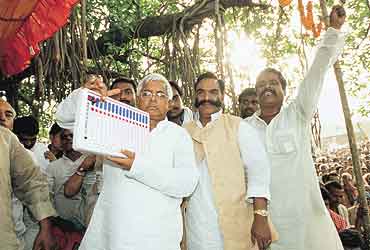 The battle may be for Delhi. But the mahayudh in Bihar is centred around one man. And it's not Vajpayee and "pheel good". It's the badshah of Bihar, the self-styled punk cowherd of Indian politics. As the BJP's Rajiv Pratap Rudy says at every meeting in Chapra, it's all "feel bad, feel bad, feel bad" in Bihar. The Opposition rhetoric is about how Laloo Prasad Yadav has taken the state to its ruin after 15 years in power.

Yet, it's very likely that Laloo will inflict some losses on the BJP-JD(U) alliance that currently holds 30 of the state's 40 Lok Sabha seats. With his RJD having sewn up a formidable alliance with Ram Vilas Paswan's Lok Janshakti, the Congress and the CPI(M), every seat in the state is witnessing what in Bihar is called "takkar ki ladai". Such cliffhangers will decide the fate of several central ministers. Two BJP colts, Rudy and Shahnawaz Hussain, could bite the dust, though some JD(U) leaders from the socialist stable like Nitish Kumar, George Fernandes and Digvijay Singh are likely to romp home. Sharad Yadav, again facing Laloo in Madhepura, would be extraordinarily blessed if he could repeat his fluke win.

For love him or hate him, there's no denying that after one of the longest innings in power, Laloo continues to mesmerise the people of Bihar. He is perhaps the only politician who can make even the visiting journalist part of his campaign speech. At Patepur village in Hajipur, the Outlook team is summoned to the roof of his rath. "Dilli ke mashoor patrakar aye hain aapke gaon. Kyunki ek hi beta hai Bihar ka jisne bola kaun mai ka lal kehta hai ki Hindu rasthra banayega (Journalists from Delhi have come to your village because only one son of Bihar is ready to challenge the communal forces)."

Laloo doesn't make speeches. He conducts a dialogue with his electorate. The day is spent making a few whistlestop halts in his helicopter. But from 5 to midnight, Laloo travels in his 'garib chetna rath'. He doesn't take the main roads or the state highways. Instead, it's a tortuous back-breaking journey through the potholed dirt-tracks and roads of rural Bihar.

As night falls, there is a halt every few minutes. There are a few characteristic Laloo jokes in Bhojpuri. He remonstrates the crowds for allowing the "communal phorce" to win so many seats in 1999. But the thrust of his campaign is to demonstrate the use of the EVM on his dummy machine. "Agar machine peeee nahin bolta to dal mein kuch kala hai. Tum phir se harmonium wala button push karo...darna nahin machine se (If the machine doesn't go peee, there's something wrong. Press the button again. Don't be afraid of it)." In village after village, he goes through the customary 'peee...teee' rigmarole.

The social profile of Laloo's supporters is presumably such that they could be intimidated by a machine. But none of them seems to be intimidated by Laloo. An old gaunt woman complains about an electricity pole that gives no power. A young boy cribs about having to walk a long distance to school. Give us better roads, potable water, they say. A local schoolteacher puts it succinctly: "Laloo gave the poor a voice. Now they are asking for more."

nda leaders hope that this desire for bijli-sadak-paani will translate into a wave against Laloo. Says the BJP's Ravi Shankar Prasad: "There's a difference between a Lok Sabha and an assembly poll. People know this election is to choose a government at Delhi where Laloo can't play such a big role. Many of the nda heavyweights have nursed their constituencies and made massive investments in sectors like railways". Besides, the caste and constituency arithmetic after the creation of Jharkhand is such that while Laloo is virtually unbeatable in an assembly poll—due early next year—the nda still has an edge in a Lok Sabha poll.

Take the example of Chapra which Rudy won in 1996 and 1999. Of the six assembly segments, the BJP holds only one. This time around, with Laloo himself standing from Chapra, Rudy faces a monumental challenge. He complains: "Earlier RJD candidates would demand more paramilitary forces because they knew that if the lower castes felt secure in a Rajput-dominated seat they would vote for Laloo. Now they are not asking for more security because Laloo is determined to rig the polls in Chapra."

Shaibal Gupta, a leading social scientist and economist, sees things differently. "Till Laloo came to power, a low-caste man would not sit on an empty train berth if a Thakur or a Bhumihar was there. Today, they will push and grab every empty seat. Those who do not understand this cannot understand Bihar." Even more so than UP, where there is a so-called "Hindu" vote. In Bihar, caste is king. Many of the JD(U) heavyweights, for instance, are comfortably poised because of the Kurmi-Koeri support base that combines with the Rajput-Bhumihar in several constituencies. The BJP, too, operates largely on the basis of caste calculations in Bihar.

Ram Vilas Paswan, who once held a world record for the margin of electoral victory from Hajipur, believes that "social composition" is the key to a successful alliance in Bihar. Says he: "Bihar is a funny place. When I was a minister and made a lot of investments in my constituency, my victory margin was not so high. But when I was a novice who had done nothing, I set a world record in Hajipur." This time he is certain his votebank combined with Laloo's will make a "deadly social composition".

As the electoral battle hots up, one may ponder over what politics delivers to the average Bihari. Are politicians the root of the many problems that ail Bihar? Is Laloo a disastrous administrator who continues on the basis of caste calculations? Gupta says there are no simple answers. "Even before Laloo came to power the state had gone bankrupt.... Sometimes I think you have to be insane to want to rule a bankrupt state like Bihar."

But the state continues to produce larger-than-life political characters. Meanwhile, one of the bizarre realities of modern Bihar is CM Rabri Devi. "Politics hamari majboori hai. Hum ab bhi ghar main baithna pasand karenge (Politics is my compulsion. I would still prefer to stay at home)," she told Outlook. Yet, Rabri today is campaigning on her own, telling crowds: "Laloo is the hero of Bihar and I'm his heroine." Can the chief minister's lord and master make other self-styled heroes bite the electoral dust?

Saba Naqvi Bhaumik And Faizan Ahmad In Chapra, Siwan And Hajipur In Bihar