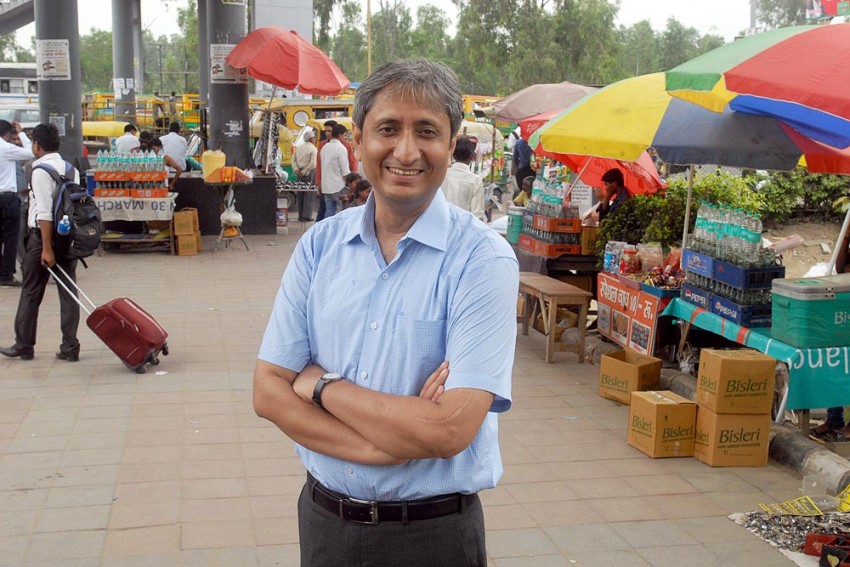 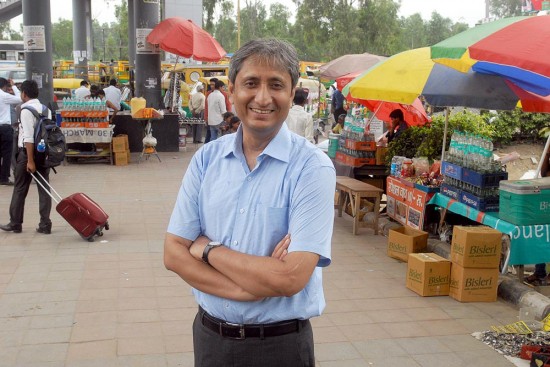 Ravish Kumar is extremely hurt, upset and angry at the bullying and abuse he’s been getting on social media platforms of late, all at the hands of political groups at variance with his own liberal ideology. “I don’t deserve it, I don’t want to go through these trials,” he says, visibly upset. The targeted hate mails recently forced him to deactivate both his Facebook and Twitter accounts and carry forward his battle against the “online political war rooms” on his popular blog, ‘Naisadak’. The distress aside, the positive side to this clash with social media lumpens has been that it has conclusively proven that Ravish does matter. Love him or hate him, but you can’t ignore him.

In the English-dominated media, where languages have to fight hard for parity, Ravish has built an enviable stature of his own. Even English-speaking viewers have their daily dose of him on NDTV India Prime Time. Times may have changed but his popularity today is comparable to the likes of S.P. Singh or Vinod Dua of yore. His connect with his viewers is undeniable, way beyond what the lopsided trps throw up. We meet him in a coffee shop in an NCR mall, close to his home, the long conversation punctuated by ceaseless interruptions from fans. He, in turn, talks to them directly, one on one, shorn of any glamour. “There is no halo of a star,” says sociologist Shiv Viswanathan of his appeal. “The human warmth and accessibility is rare,” says writer-journalist Om Tha­nvi, former editor of Jansatta. The fans want selfies, they talk about a show that was shot close to their own hometown. It’s not a fickle following but one which is committed. So Aanchal Unn­ati, who works with Vats Publishing, even has “admirer of @ravishndtv” displayed right up there on her Twitter bio, something she is proud of.

It was the world of Hindi blogs that got the Bihari boy from Motihari  prominence initially, much more than the TV camera. “He used the space creatively to say things he couldn’t otherwise,” says Ravikant, media historian at the Centre for Study of Develo­ping Societies. Today, there are as many fans of his blog writings as there are of his reportage on TV. Even his experiment with writing short love stories (Laghu Prem Katha aka Laprek) as FB status updates has grown into an online movement and his book of micro fiction, Ishq Mein Shaher Hona, has been published by Rajkamal Prakashan.

But it’s hard-hitting news and interviews that are his forte. “He brings in that authentic note which is missing on TV,” says social commentator, author and columnist Santosh Desai. “Depth of thought, a focus on social mobility and a lack of any predetermined political agenda” are the key takeaways from his show for Abhay Kumar Dubey, associate professor at CSDS. “He is as much at home discussing politics as he is culture, looks politicians in the eye and questions them in a matter-of-act way with just that glimmer of scepticism in his own eyes,” says Viswanathan. Though he might be disturbed at the social media backlash from trolls, he is open to genuine criticism.

Currently, Ravish could well be the most unusual face of TV news. In all the din, he sits calm and pensive, provocative yet non-combative. Even when the debates get heated, he is patient, always maintaining a civil atmosphere. “The same faces debate the same issue across channels but there is gravitas to his show. There is reasoned exchange and even when he cuts people to size he does it with great candour and logic,” says media analyst Akhila Sivadas of the Centre for Advocacy and Research (CFAR). Not only has he taken Hindi TV beyond the mind-numbing “speed news” syndr­ome, he is also celebrated for his use and reinvention of the language, not literary as much as natural, spontaneous. “If Arnab is a glossary book, Ravish is an ordinary lingo guy. He can even use silences to provoke or as punctuation marks,” says Viswanathan. Ravish himself thinks Hindi news is too dogmatic and needs to diversify. “It is too ghettoised. It needs to modernise and come out of the UP-Bihar syndrome. It will have to start thinking of Kerala and Tamil Nadu,” he says (see interview on www.outlookindia.com).

The style of functioning is distinct. His journalism is extensively resear­c­hed; yet it goes beyond rote homework. Most agree that he has helped bring some sense of sanctity to news. In fact, many of his fans prefer to see him rep­orting from ground zero than anc­hor. He himself believes in being out there than doing armchair journalism (his advice to young journalists is watch as little TV as possible). “Don’t let your minds get colonised by reading 10 newspapers every day; it’s when the legs of a reporter get weakened that he loses his stature. I used to roam in buses on weekends and note down what I saw as ideas. I went to areas like Govindpuri, Bhajanpura,” he recollects.

No wonder he has expanded the scope of news to give us tales of the underbelly and the marginalised. “Just like Dibakar Banerjee showed us a new Delhi in Hindi films, Ravish changed the grammar of how Delhi is portrayed on TV screens. He took the camera to the outskirts of Delhi,” says Mihir Pandya, author of Sheher Aur Cinema Via Delhi. He brought other facets of the capital than just Lutyens’ Delhi. In 2010, he exposed us to the world of workers in Kapashera. Recently, he went back there to find that things hadn’t changed, in fact they had got even worse. He exposed grubby Khoda, an area in the NCR that is treated worse than a step-child. In the wake of the show, the UP government pledged several crores for its upliftment.

So, it’s these urban slums and subaltern pockets that swear by him. Vimla, a senior community leader who works in CFAR’s focus groups in the Delhi bastis, says that he is their go-to person for making sense of what’s happening in the country. “In the midst of the madness, he makes you understand things,” she says. People still remember Ravish Ki Report’s episode on G.B. Road and another on the bra and button makers of Old Delhi. A recent episode of Prime Time looked at the world of khadi and how the assertion that its sales had doubled was specious. Ano­ther one showed how pricey pulses were forcing the middle class to go for cheaper but bad quality dals.

Santosh Desai says that the man doesn’t just look at issues that concern the forgotten but carries the persona of the outsider himself. For him, Ravish is like the progressive lyricists of 1950s Hindi cinema. There is an artistic element to his observations. The pitch of his long, trademark introduction in Prime Time News says it all. “There is an empathy. He is not detached, clinical. It’s not dry commentary but lyrical,” says Desai. Which, in turn, has brought him criticism too, about being driven too much by sentimentality. People disapproved of his eating food with the workers in Kapashera factories on camera as too emotionally manipulative and needlessly nostalgic about his own roots and identity. Besides, there have been the usual “left, secular, anti-Hindu, pro-Muslim, pro-Dalit” charges against him as well.

Behind the TV celebrity is a normal family man, married to Nayana Dasgupta, who teaches history at Lady Sriram College. He is the adoring father of two little girls who he claims are re-educating him. Meanwhile, people keep coming to him every day—bringing stories, asking for favours and, sometimes, to just offer him rice from their own fields. All of which makes him uncomfortable. “Everyday I am humbled by the hopes people bestow on me,” he says. All he can do is just tell their stories, while accepting that he “can’t change the world”.