The Passion Of Amartya Sen

We can be more than one kind of person, given different contexts, avers our argumentative Indian 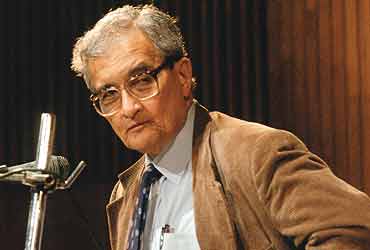 Identity And Violence: The Illusions Of Destiny
By Amartya Sen
Penguin 144 pages; Rs 295

An argumentative Indian can sometimes be a surprisingly passionate man. Here, the words 'surprisingly' and 'passionate' are used with some deliberation because the Indian in question, caught mid-argument, is none other than Amartya Sen. After all, 'passion' is not necessarily the first thing that springs to mind when you think of the good professor. You think of a measured, reasonable, persuasive voice, that marshals evidence, lays out a case, and constructs an edifice of ideas entirely through logical steps, causal connections, elegant equations and a mass of statistical and empirical data. That is what people who win Nobel prizes for economics are usually expected to do.

And yet, in reading Identity and Violence : The Illusion of Destiny what you do ultimately come to grips with is what might be best described in quasi-Biblical terms as 'The Passion of Amartya Sen'. In a set of nine closely interwoven essays, Sen takes on the violence and the threats to peace and intellectual liberty that spring from unexamined assumptions about culture and identity in the contemporary world. In doing all this, what Sen renders transparent is the degree to which he feels angry, sad, joyous, irritated, pleased and hopeful, sometimes all at once. We hear him chuckle and laugh, complain and get exasperated, and occasionally, we hear him sigh. Sen revisits several of the debates of his earlier collection of essays The Argumentative Indian. He returns to them elliptically, sometimes repetitively, but always with a passionate, almost obdurate intensity. As if the tasks he had set himself are unraveling before his eyes, and are in need of constant, repetitive acts of nurture and care.

Can the measured path of reason (which Sen invokes in the words of the Emperor Akbar, as 'rah-e-aql') be touched and ruddied by the warmth of sentiment? A close reading of Amartya Sen's unfolding career as a moral philosopher, and as a peripatetic public intellectual, would in fact suggest that it can.

Amartya Sen, the moral philosopher, is a companionable interlocutor to Amartya Sen, the economist, and Sen the skeptical enlightenment intellectual is an interesting counterpoint to Sen the sentimental Bengali. Here, I mean 'sentiment' not pejoratively or condescendingly, but appreciatively, as a recognition of a certain depth and intensity of feeling. This reasoned depth and intensity of feeling is the basis of the principal intervention that he makes in Identity and Violence. We can read this in the way he glosses key ethical and cognitive problems facing the contemporary world through an optic that owes a considerable debt to the role of 'sentiment' in classical Economic thought, particularly to a close (and somewhat covert) reading of Adam Smith. Smith, sometimes reviled as the theorist of self interest, had emphasized the significance of 'sympathy' in making us feel the passions of others in a neglected text called A Theory of Moral Sentiments. It is not often remembered that 'sympathy' for Adam Smith was as important a factor in the making of decisions in the real world as the calculus of self interest.

Amartya Sen's arguments in Identity and Violence can be read as an exercise in the contemplation of sympathy as a social force. For him, it is sympathy that produces the feelings of identity with those we consider to be like ourselves, and sympathy again that generates resonances with the feeling of people we might designate as 'others' for a given purpose. Sen goes on to argue that our affiliations are in fact plural, and that we can be more than one kind of person, given a plurality of contexts. Thus a person may be at the same time -"an Asian, an Indian citizen, a Bengali with Bangladeshi ancestry, an American or British resident, an Economist, a dabbler in Philosophy, an author, a Sanskritist, a strong believer in secularism and democracy, a man, a feminist, a heterosexual, a believer in the rights of gay and lesbian people, with a non religious lifestyle, from a Hindu background, a non-Brahmin and a non believer in the afterlife"

The person whose portrait this is (and can it be anyone other than our argumentative Indian?) is not a being without identity, or a man without qualities, but a person who engages different aspects of his self when encountering different kinds of people, situations and choices. His 'sympathies' are neither monochromatic nor monotonous, in fact they articulate a broad spectrum of possibilities that need not add up to a consistent or even harmonious monad. As Sen says, with some poetry and much conviction, the horizons of the self are multiplied, not halved by history and circumstance.

Following Sen, we could argue that it is precisely this matrix of complex 'sympathetic' resonances between different aspects of different selves that makes for the web that we are accustomed to think of as society. To think of any one of them as cardinal is to enter the trap of the illusion that we are destined to be one thing over all others. The refusal to entertain the 'illusion of destiny' entails a recognition that we choose to be who we are more than that we are condemned to be who we are said to be. It means understanding of the fact that some Bengalis may enter into relationships of significance with some Uzbeks based on an acknowledgment of their common agnosticism, even as some Bengalis might enter into meaningful dialogues with some Tamilians on the basis of a shared perception of non-Brahmin identities, just as some devout Jain vegetarians who are heterosexual but believe in the rights of gay and lesbian people might find common cause with some homosexual Muslim, or Sikh, or Hindu, or Jewish, or Christian or Atheist carnivores. These relationships and alliances are contingent on the situational dynamics that different people find themselves in at different points of time, in different places and contexts, and at different times in their lives. They spring from local circumstances and they span the earth. They are the products of reasoned choices made by reflective individuals and discursive communities. Some of these may be more enduring than others, and might determine a greater part of a person's life, others may be momentary but highly significant in terms of the intensity of interaction. Some may lead to lasting friendships and alliances, others may lead to accidental and momentary but significant solidarities. But in either case, the placing of people in boxes that designate one identity to the exclusion of others leads  necessarily to impoverished, 'miniaturized' selves and stunted social possibilities. This impoverished self is what Sen designates as being under the sign of a 'solitarist' conception of identity.

This 'solitatist' notion of identity creates guided missiles of the self that keep hitting the same target. Thus, the contemporary Muslim or Hindu or Christian is shorn (by others and in many cases by himself) of any possibilities other than those underwritten by what Sen calls 'Civilisational Incarceration'. She is condemned to become a shade of what she could be simply on the basis of a received idea of what it means to be Muslim, or Hindu, or Christian, or whatever. Sen demonstrates this process of the 'impoverishment' of a series of identities, be they configured as 'Muslim' or 'colonized' or 'Western' subjects, with an array of arresting examples and contrapuntal histories that span from India, to China, to Ireland, to Africa, to the Arab and Islamic world. He patiently argues a case for a considered appreciation of the Islamic world's contribution to science, technology, doubt, the freedom of thought and reason as a necessary countermeasure to the univocal registers of the theses of the 'Clash' and 'Dialogue' of Civilisations. He shows how uncritical 'multiculturalism' may very easily devolve into a set of plural 'monocultures'. He argues for an acknowledgment of the debts that the West owes the East, and vice versa. He searches for room in the difficult but vitally necessary intellectual space that is neither an elegy nor a dirge for the long history of globalisation. He is able to see the validity of the critique of immiserisation that many 'anti-globalisation' activists articulate, and he is also able to state (though not as convincingly) that the operation of global market forces can have a variety of different consequences when they are qualified and attenuated by wider social choices and decisions about democracy, gender relations, health, and education.

While reading Identity and Violence, I also read a remarkable testament to the violence of identification - a set of twin blogs in Hindi and English that documented and witnessed the destruction of one of Delhi's most alive and hospitable neighbourhoods - Nangla Machi - on the banks of the Yamuna, flanking the ring road as it arcs past Pragati Maidan. Thousands of hard working, peaceable people were made homeless last week by bulldozers and riot police acting under the orders of the judicial apparatus, to the accompaniment of a deafening near silence in the media. Accounts of wardrobe malfunctions at fashion shows took precedence over news of demolitions and the relentless violence of an un-accountable judiciary. The blog entries, written by young media practitioners who lived in Nangla Machi and some of their interlocutors, speak of a world of everyday sympathies and solidarities, of the complex map of identities that is embodied and lived in a working class neighbourhood in a city like Delhi.

Ironically, it was the residents' inability to furnish proof of their 'identities' and documents, a grave failing in the face of the ruthlessness of a state mandated demand for 'solitarist' inscription as 'legal' inhabitants, that led to a perceptional precedence of their status as trespassers over their claims to humanity and habitation in a city. This is what eventually contributed to the continuing violence of their eviction. It is those who refuse to be identified, or those who sometimes cannot be adequately identified, who also bear the brunt of the harshest blows when the violence of identification comes calling astride a bulldozer armed with a court order. Underlying it is a total negation of any 'sympathy' on the part of the judge who writes the eviction notice towards those who are to be evicted. For him, there cannot be any point of intersection or resonance between their humanity and his eminence. After all, he reasons, they defecate by the road, and he purges in his chamber. A clear demarcation of identities, even of corporeality, between the judge and the judged, between the elite and the urban subaltern, is the necessary prelude to the role played by the foundational violence of the state in the process of the re-configuration of the city.

Reading Amartya Sen on violence and identity is an occasion that might help us find ways in which to think about this fact with precision and with sympathy, and consider ways of ensuring that it happens less often.

The reviewer is co-founder of Sarai. A slightly shorter, edited version of this appeared in print.

Ghost Of An Office