The Papers Are In Order

Or how I determinedly sized up the careworn Indian system, ran into a brick wall, yet still managed to secure a PIO card for myself 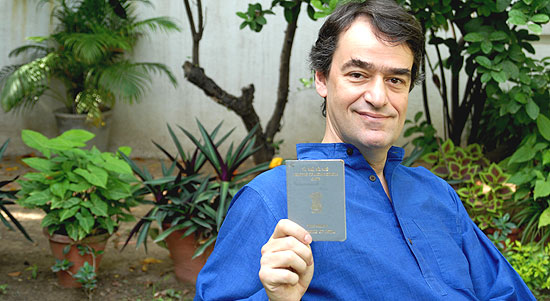 I am a Person of Indian Origin. I have a slate-grey passport-like document issued by the Indian government that says so. But I’m not really. I was not born or brought up here, and I do not have a single direct ancestor who, as far as I know, ever lived in India. I have become the proud possessor of a Persons of Indian Origin card because I am married to an Indian citizen.

I had lived in India, on and off, for ten years—and had been married to an Indian citizen for even longer. Previously, my visas were renewed every six months. We now wanted to stay in India indefinitely and make our home in Delhi. I would have preferred dual citizenship—but that wasn’t, and still isn’t, available. PIO would be second best. But the actual card was not easy to come by. It involved a total of 17 visits to three separate ministries and five different offices. It took up at least four full days of my life. I was interviewed twice, the second time at home with my wife, Shireen. The first time was at the offices of the Foreigners Division, Ministry of Home Affairs, in an unventilated, very public room brimming with non-Indians from every continent. I reached the head of the queue after two hours of eavesdropping on other people’s immigration problems. I was asked, among other more prosaic questions, to explain why I had married an Indian woman (“Love,” I said, monosyllabically), and then, with a leer and a twinkle, whether I had had many Indian girlfriends. “N-no”, I stuttered. My hesitant response did not reflect either uncertainty or mendacity on my part, but my surprise and my growing irritation with the questioner. The interview ended abruptly. He wrote “Refer for further enquiry” on my residence permit and said I would receive a home visit. “We need to be sure that marriages to Indian citizens are genuine.”

Several weeks later, one Friday afternoon around 5 pm, I received a phone call as I was pottering around the streets of central Delhi. The investigators from the Home Ministry would be at my home at 5.30. As I rushed home, images of Mr and Mrs, a television programme of my UK childhood, flashed through my mind. A gormless husband would be placed in a soundproof booth, while his bright-as-a-button wife would stand on the stage. She would be asked semi-intimate questions about their life together: what was the first present she gave him when they were dating? What colour nightclothes was she wearing yesterday? And so on. The husband was then released from the booth, and would invariably get the answers wrong, to his embarrassment and everyone else’s amusement. It was gentle viewing—a mild celebration of female omniscience and male autism. But now I was going to take part in a real-life version of Mr and Mrs, and my precious PIO card, and perhaps my right to stay in India, would depend on it. And, suddenly I could not, for the life of me, remember the colour of Shireen’s toothbrush, or the name of her favourite Hindi movie, or her shoe size. Fifteen years of marriage had been erased from my memory. I was sweating with nerves by the time I reached home.

Two men were seated on the edge of the sofa, looking even more nervous than me, untouched glasses of water in front of them. Shireen was questioning them about their professional qualifications—which were not very extensive. I gave her a self-conscious kiss on the cheek and sat down. At that point, our children burst in, a dancing duet of carefree excitement.

“What are these children?” asked the chief investigator.

“They’re ours.” Shireen responded with a slight chill in her voice.

“Children of both of you? They are very old.”

“Yes, both of us. They’re twelve and eleven.”

“How do you have children if you are just married?” I had not prepared for this baffling line of questioning—and was later reprimanded for just sitting there with my mouth open. Shireen, meanwhile, delivered a crushing blow.

“Ridiculous (sotto voce).... This is all totally ridiculous (out loud).... We’ve been married for fifteen years.”

The two men looked at each other, aghast, and then started scrabbling through the cardboard file they had brought with them. It became clear that they normally interviewed newly-married couples.

“Can we see your marriage certificate?” I showed it to them and was asked for a copy. I printed out a copy of the certificate, which was downloaded on my computer. They then got up and left—abruptly ending my brief cameo on Mr and Mrs—having promised a decision within two weeks.

The following evening, a Saturday, our cook, Pan Singh, said one of the men who had come yesterday was at the gate, asking for a lifafa, the Hindi word for envelope. I asked him to invite the man in. Pan Singh returned, a little sheepish, saying the man refused to come in, but just wanted a lifafa—with our marriage certificate. And so, slightly puzzled, I printed out another copy.

Later, I told a friend this story. “He wanted a bribe, you idiot. A lifafa is what you put the bribe in. You’ll never get your PIO card now, and he’d have been perfectly happy with 100 rupees.”

Three weeks later I went to the Foreigners’ Regional Registration Office to hear the good news, and the bad. “Your application for a PIO has successfully passed the enquiry stage,” the official informed me without looking up. “But unfortunately, Mr Miller, all your documentation has gone astray and you will need to resubmit.” I looked heavenwards and brought my hand down rather heavily on the table. “I’m sorry. We’re not computerised yet, and some of our agents are a little careless.” It may have been my imagination, but I’m sure I detected the trace of a wink in her left eye. “Probably best to apply next time you’re in London,” she told me cheerfully. I walked away presuming, but unable to prove, that my papers had been deliberately lost.

I took her advice. Three weeks after putting in my application to the Indian High Commission in London (no interview necessary), I had my precious PIO card—together with a 15-year visa, the right to buy property in India, and, to my amusement, the ability to join the diplomats’ queue at immigration at Delhi airport. This is of no practical use, because I still have to wait just as long for my luggage, but I do get childishly gleeful as I saunter past the first-class passengers.

(The author, a former BBC correspondent in India, is the author of Delhi: Adventures in a Megacity [Penguin India 2009], from which this article has been adapted.)

The Past Is Still Present