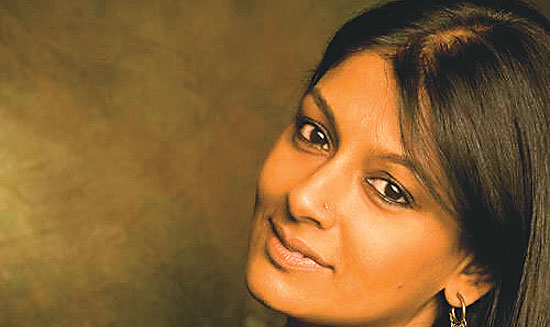 She is the best example of an Indian’s perception of a beautiful woman: brown complexion, chiselled features, fawn-like eyes and a gentle smile on her lips. She uses no make-up like eye shadow, powder, rouge or lipstick to enhance her beauty. Even so, her face leaves an indelible stamp on one’s mind which can be brought alive anytime you think of her. She is Nandita Das—actress, director and producer of films which carry a message. She is the daughter of the eminent Oriya painter Jatin Das and Gujarati Hindu-Jain mother Varsha. She was born, brought up and educated in Delhi and may rightly be described as Nai Dilli ki beti. She did her schooling in Sardar Patel Vidyalaya, took a degree in geography from Miranda House and MA in social work from Delhi University—getting firsts in all of them. With her academic achievements she could have made it to one of the central services. She toyed with the idea of becoming an Odissi dancer but her stunningly photogenic looks and talent for acting drew her into the film world.

I have not been inside a cinema hall for over thirty years and rarely switch on my TV except to catch up with the latest news. I am not qualified to write on a film personality. However, I had a couple of sessions with Nandita Das in my home. The first was after the success of Firaq, based on the anti-Muslim riots in Gujarat in 2002, directed by her. It won her nation-wide acclaim and drew huge crowds when shown in Pakistan. It also brought her a lot of hate mail from Hindu fundoos. The second and longer session was soon after the release of Before The Rains, about an illicit love affair between a married English coffee-planter and his maidservant, also married. It got some good as well as some critical reviews. I gathered whatever material I could find on her on the net—acted in 30 films, directed four and details of her life. I asked everyone who had seen her films how they rated her—and felt compelled to put my conclusions on paper.

I went through the biodata she had sent me after our first meeting. I noticed something strange: she had lots of nice things to say about her father whom she calls Baba, but there was nothing about her mother. I knew her parents had a messy divorce when she was barely eight years old. I also heard her father had a roving eye and remarried more than once after divorcing Varsha. I told her what I had noticed and asked if her parents’ divorce had left any scars on her mind and if she had been forced to take sides. She was on the defensive. “No,” she assured me, if there were any scars, they had healed and she loved both her mother and father equally. She admitted her father was a bit of an eccentric and much misunderstood. It was her duty to set the record straight. She is very protective about her father’s reputation. I came to the conclusion it was a case of father-fixation. For her, Baba can do no wrong.

Nandita’s own forays into matrimony were also of brief duration. The first lasted a bare three years, ending in divorce by mutual consent. “We remain the best of friends,” she assured me. I changed the subject. “What do you think of marriage as an institution?”
She relaxed. “Not much. People fall in love and get married. Then they get bored with each other. They hang together for family considerations or for the sake of children. But the fun is gone. Few have the guts to get divorced.”

“I don’t have any. I don’t even know what caste I belong to. In our home we had no pooja room or idols of deities. We lit diyas on Diwali, squirted coloured water or gulal on people if any came visiting. When my aunt wanted me to go with her to the Jagannath temple in Puri, I went along to keep her company. No one in the family bothered whether a person was Hindu or Muslim—or whatever.”

“And God. Do you believe in a divinity?”

“Do you plan on spending the rest of your life making films?”

“No, if I was I would not be living in Delhi, I’d be in Bombay. I’ll make films when I have something to say. I want to make a difference in people’s way of thinking.”

“Many people say you make only art films meant for the educated elite?”

She protested. Firaq had made an impact on the common people. She quoted what her driver had to say about it. He was very moved.

So why has Nandita not made it to the top in Indian films? I answer the question myself. She is not willing to compromise on her themes. She is not willing to take part in films which have a set number of songs, acrobatic dances and mock fights which the gullible gobble up with relish and are rated by what they rake in at the box office. It is not manoranjan (amusement) she is after but chintan (thinking). She wants to make an impact on the minds of people.

Nandita lives in Gulmohar Park with her younger brother who is a creative designer. She does not go to parties. She has a busy schedule of work. She gets up at 6.30 am and gets down to it. She does not waste time reading newspapers: at one time she subscribed to three, now she only reads The Indian Express. She has no time to watch TV or indulge in idle gupshup. She loves travelling and is on the hop most of the time to distant places in the country and abroad. She reads a little and retires around 11 pm. I asked if she slept soundly. “I used to,” she replied. “Not so soundly these days.”

She is a teetotaller. In the two sessions she had with me when I was sipping Scotch with soda and ice, she kept sipping uncooled mineral water.